Progress on the house build

It’s been a while that I last wrote about the building progress. There wasn’t much opportunity for building due to other obligations. And then when there was time, it was raining so the build had to wait. As I write this we are getting much closer to closing up the roof so that we can move on to the interior and the more interesting work that is about all the systems like water and electricity.

The farm does not have any connection to utility systems and the intention is to keep it that way.

We dediced to put 18 mm plywood first on the inside of the west wall. Usually one would begin with sheating the house after the roof is on. We had a challenge with the wall extension leaning in a bit and that way we made the wall stronger to support the roof when we put on the rafters. 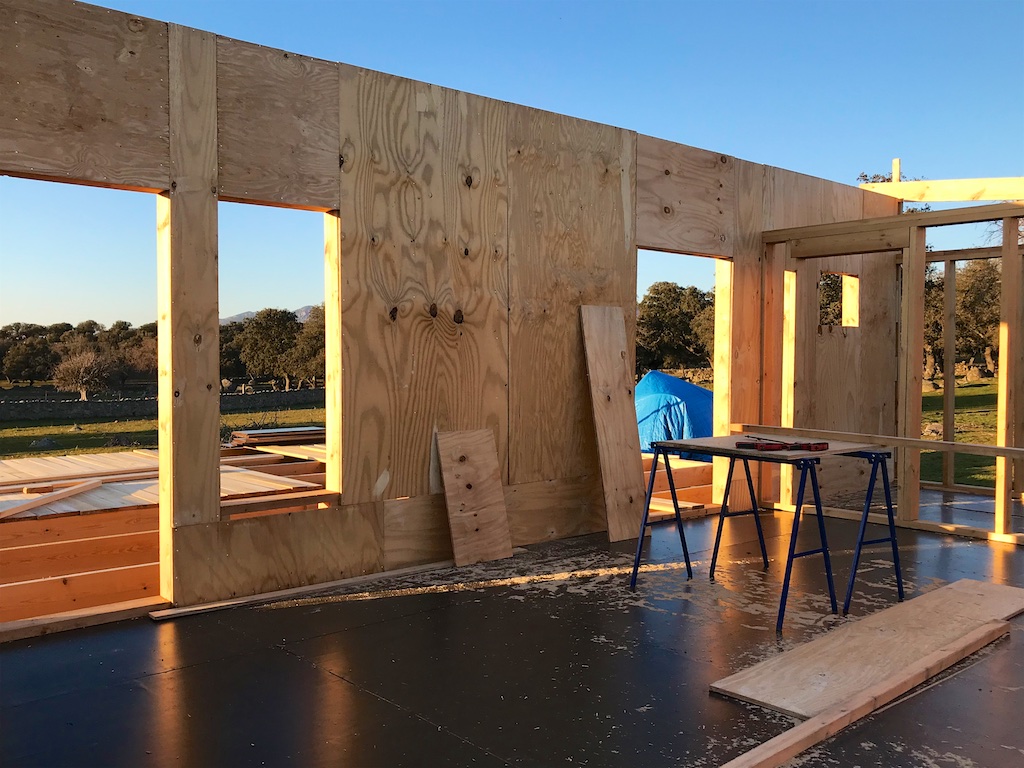 Now came the moment to try our first birth mouth cut for the first rafter. This is how it turned out. The rafter will be moved closer to the wall and kept in place with four nails that are toenailed through the rafter into the top plate of the wall. 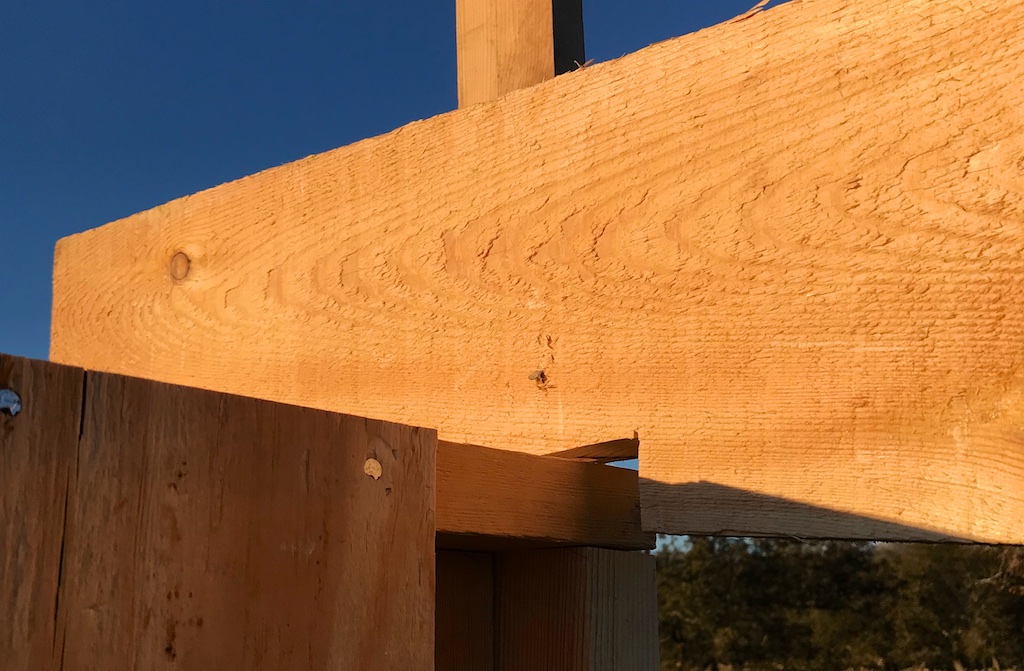 It also looks good on the other side. 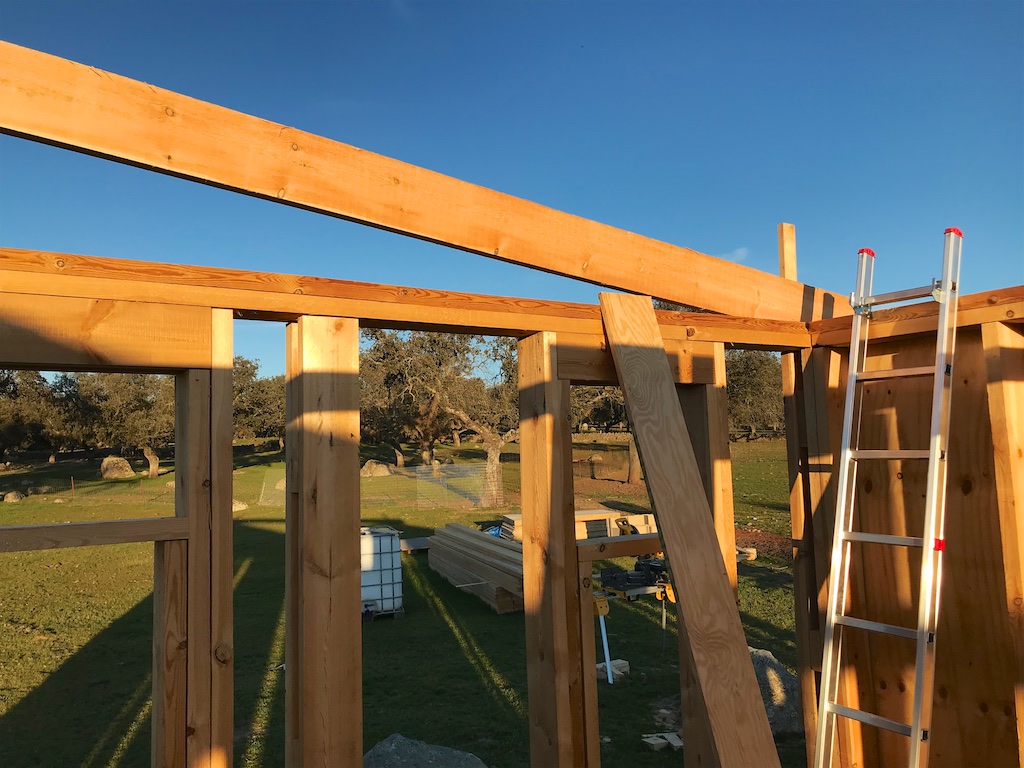 The roof pitch is shallow. We don’t have to think about a snowload but only water flowing off of it. 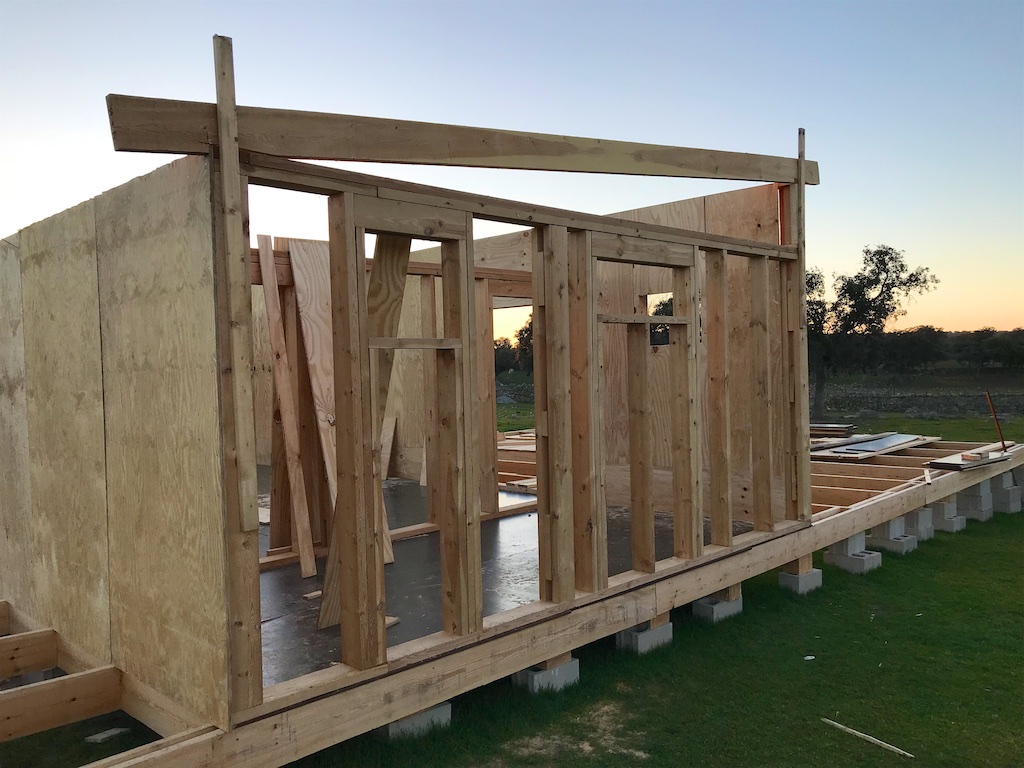 A bit later we then added another piece of wall into the triangular space between wall and roof and also put in some blockers where the outer board for the overhang will get attached to. 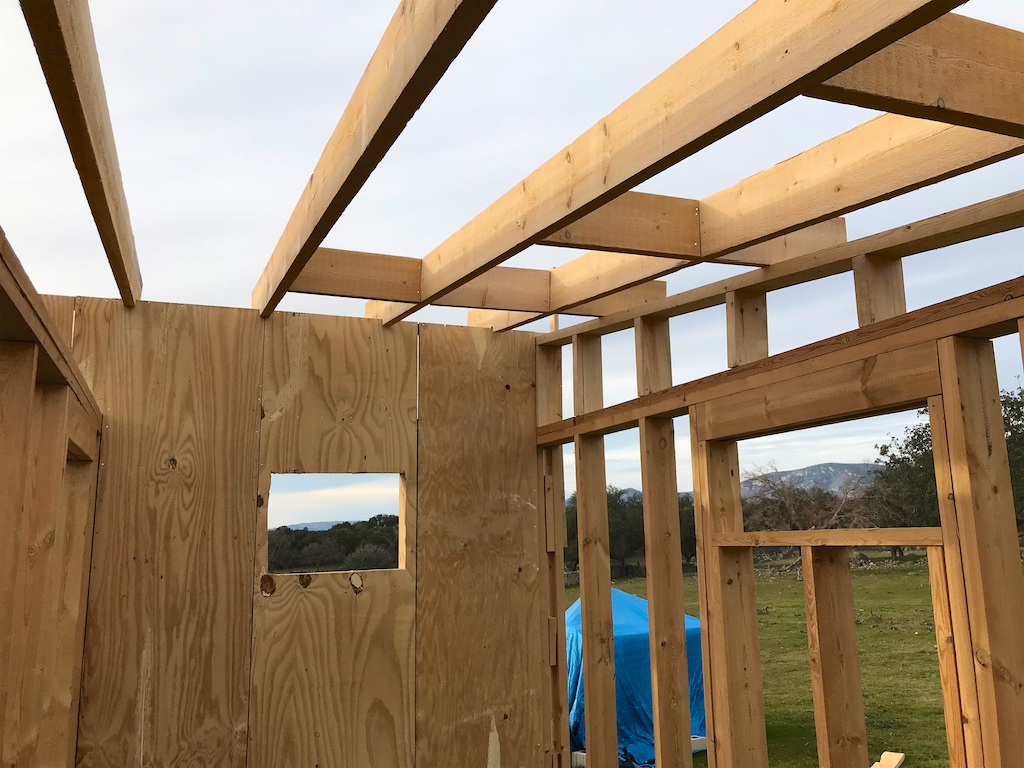 During the month of March rain is abundant here in southern Spain. The stream in front of the entrance to the farm now carries quite a bit of water. Thankfully we are able to drive the the pickup truck through the water. That allows us to bring material in while the drivers of commercial vehicles refuse the risk of getting stuck in the water.

It’s always fun to drive off-road. Just the way I used to do in Panama. 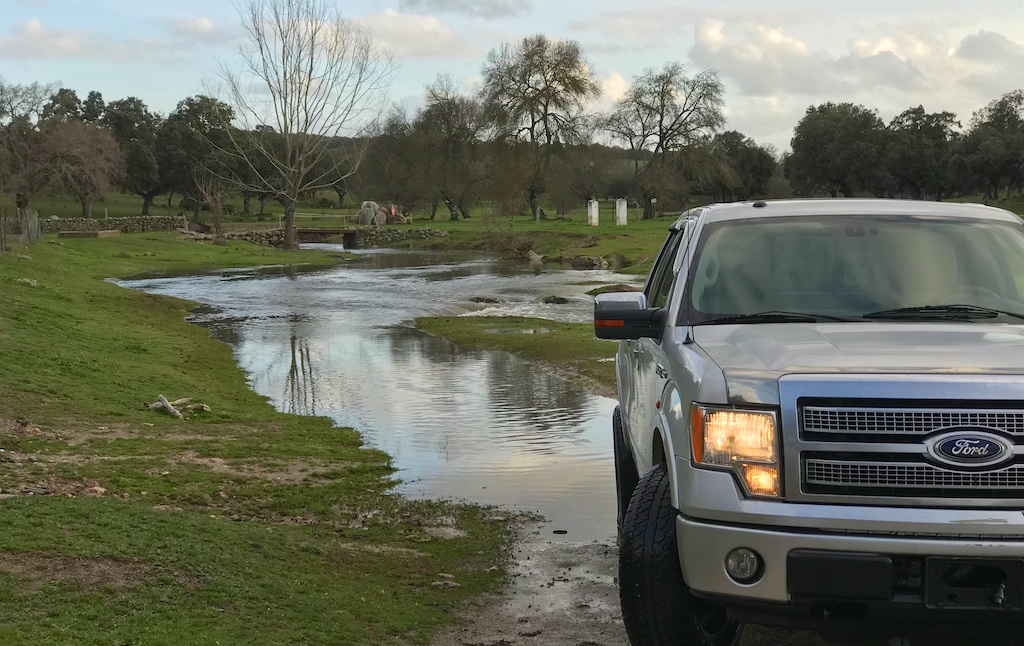 Here is an image of how the same place looks like at the height of summer for comparison. The rocks to the right of the tire tracks are the same ones that are now partially under water. In the image above they are to the left of the rearview mirror of the car. 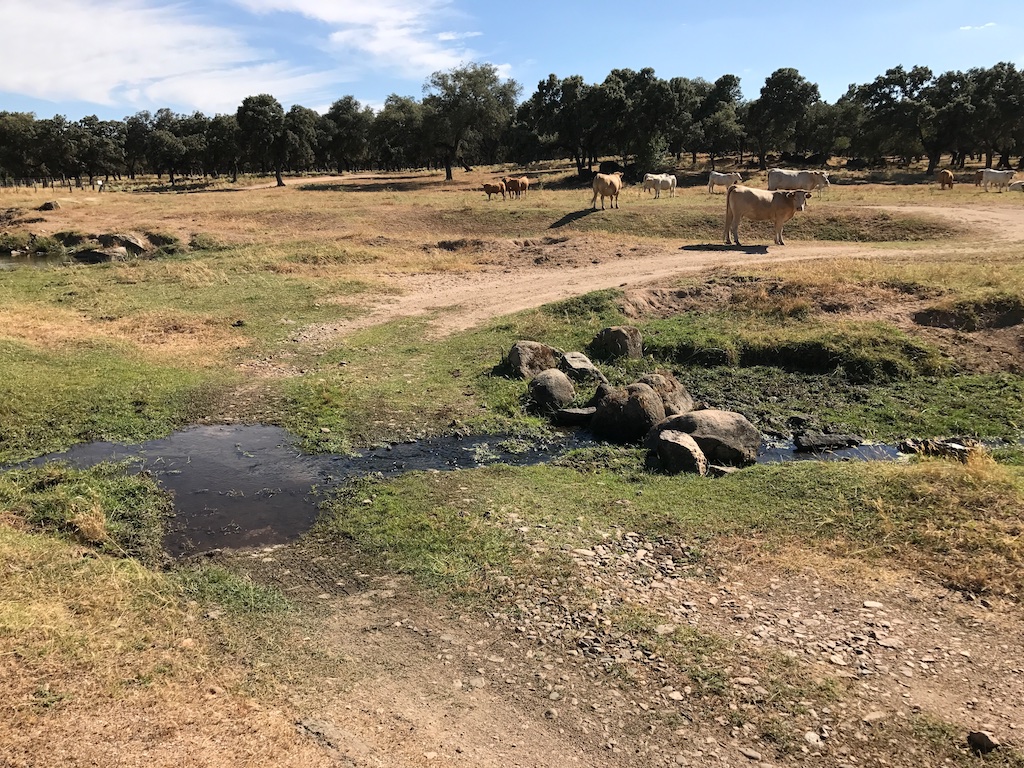 A few days later we continued with the remaining rafters. It does look like a roof by now. 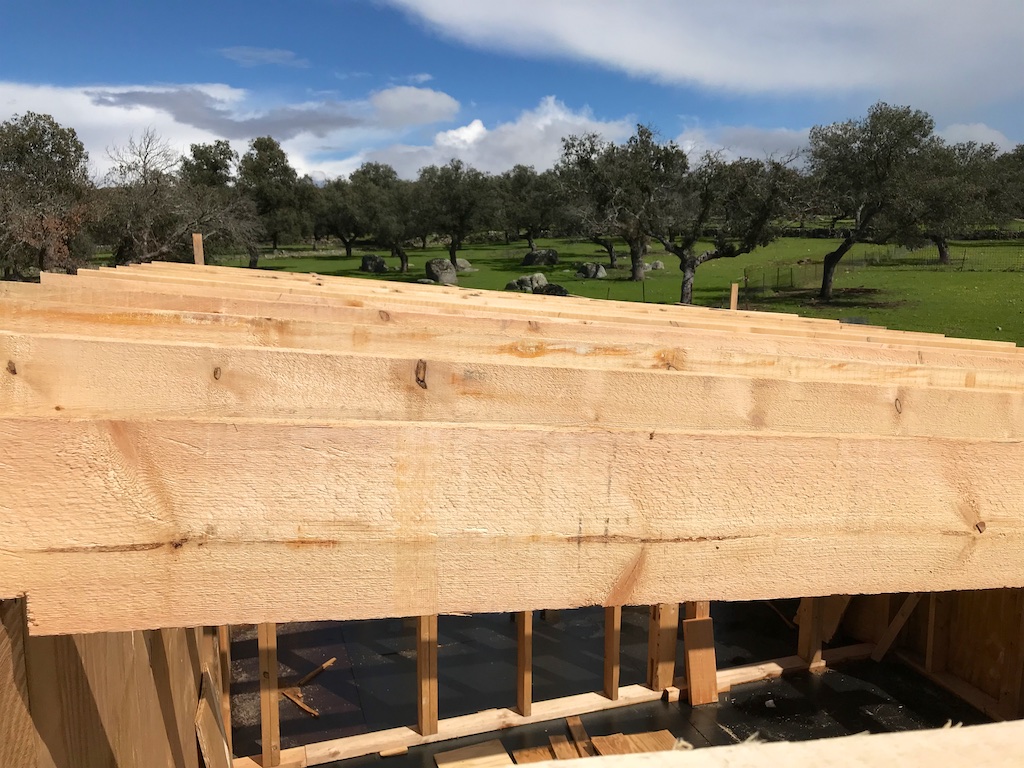 From the inside the feeling is now like being inside a house. The roof may still be open but the enclosed space now has a different feeling to it. And it does smell good :-) 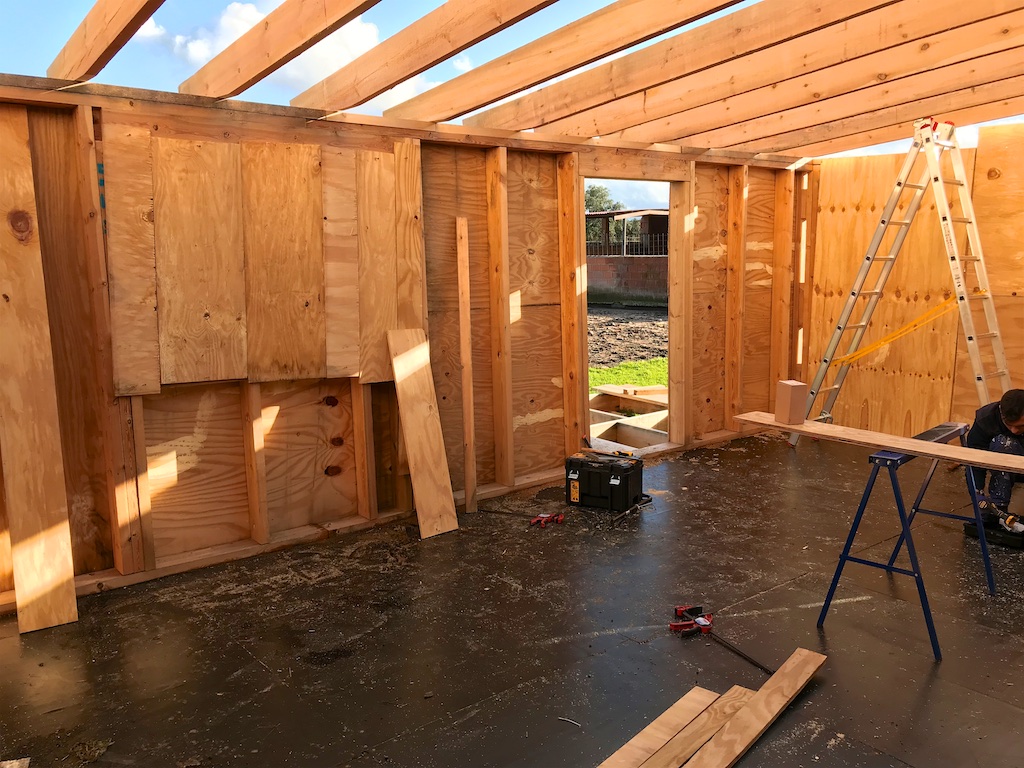 Again, time was running out and we had to stop shortly before adding the blockers for the overhang on the other side. 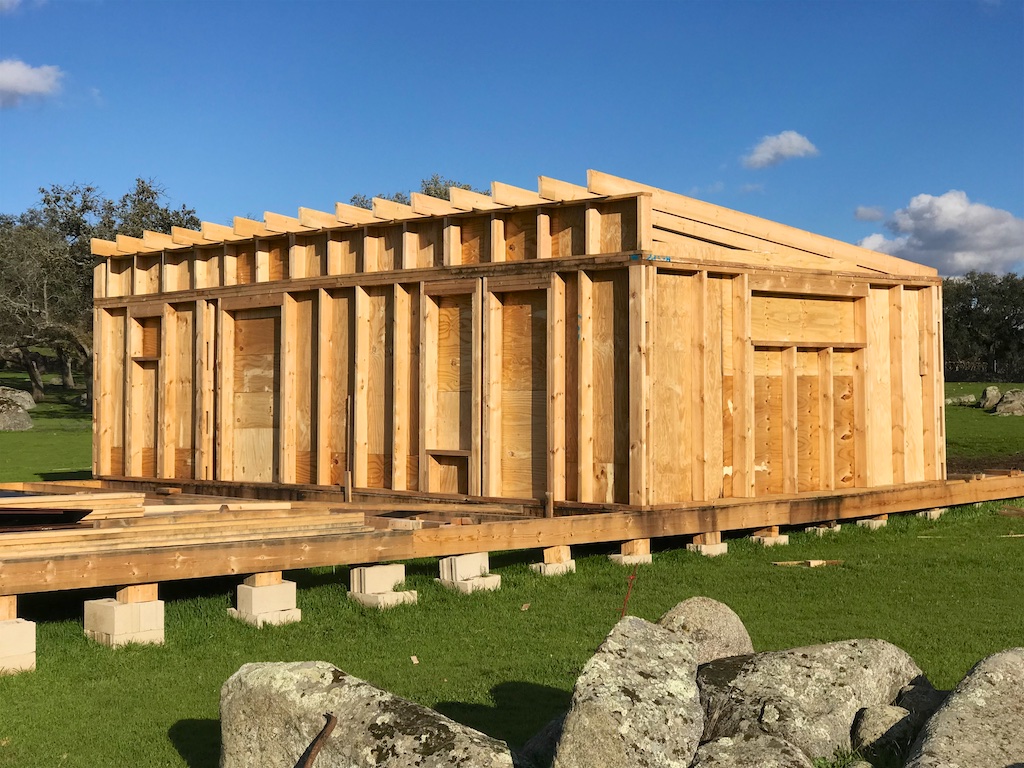 Decking for the yurt’s floor

Just over the weekend I had a few hours to continued and managed to begin with the decking for the floor in the rear half of the structure. That is where the Mongolian Yurt is going to be placed.

It also became clear, one more time, that we are doing all this for the first time. With more experience it would have been known how to space the floor joists so that the decking material can just be nailed onto them without further adding support structures. The boards are 1,25m wide and 2,50 m long. Unfortunately the spacing of the floor joists is 1 m. Next time … 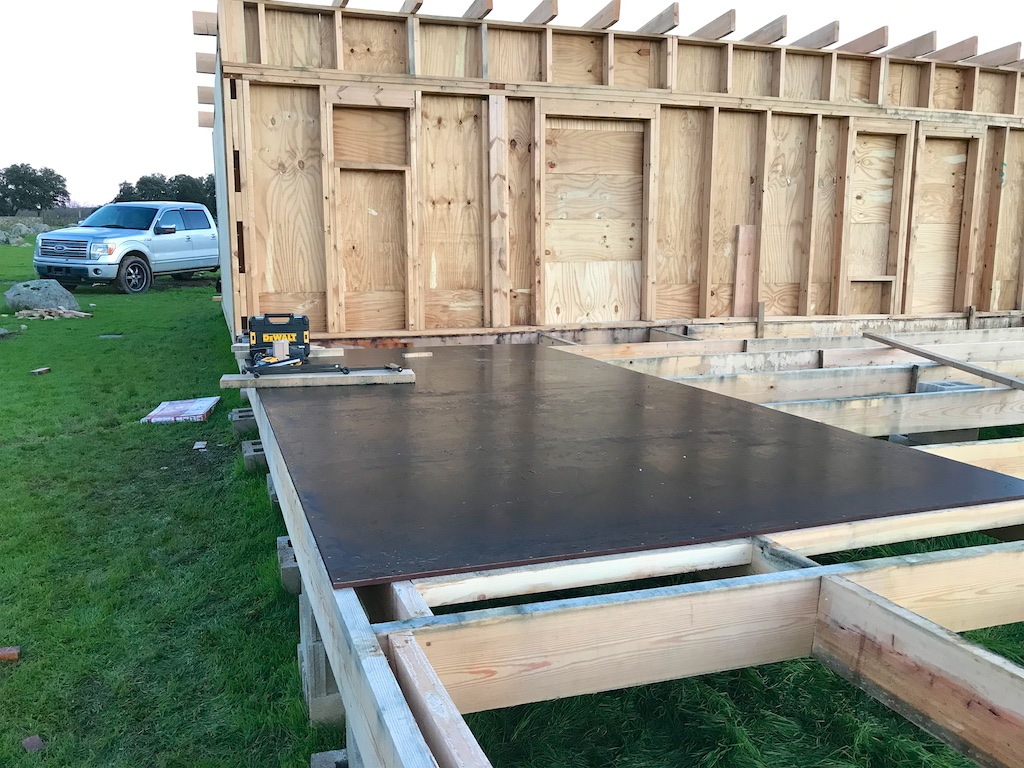