How to get to the farm

Our farm is located east of the town of Chepo in the Panama province (Google Maps). About driving half an hour towards the Darien province we reach a few houses along the street which form the village of Cañitas. A few minutes later we have to leave the road and engage the 4 wheel drive going up the hill over a gravel/dirt road to the village of Buenos Aires.

This is the center of Buenos Aires in the district of Chepo in the Republic of Panama. The building is a school where kids of different ages are tought in two class rooms. 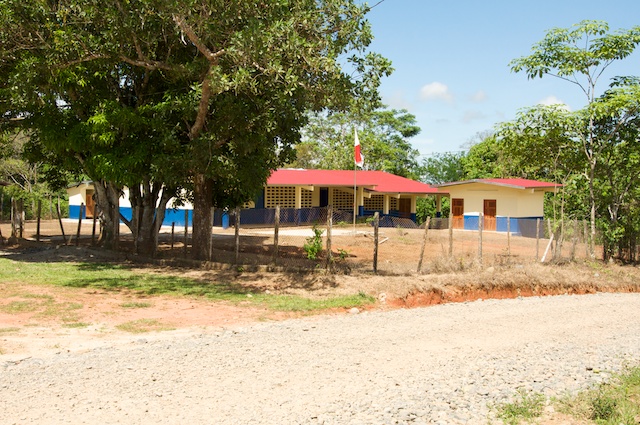 There is a little store across the school: 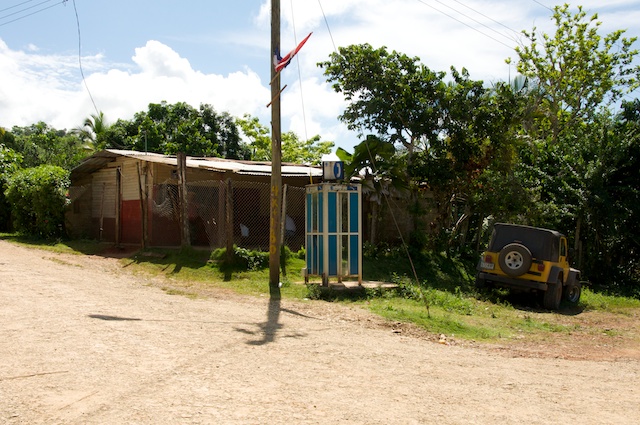 After leaving the village we are approaching the first of two rivers to cross. Most of the times it looks like in the picture and with a good 4WD vehicle it is easy to cross. Of course the vehicle has to be lifted a bit and not be stock. Ground clearance is important when crossing a river. When it rains things change. Rain in the tropics does always mean a strong downpour. This little river rises and the current will be quite strong. You won't see the rocks you can currently spot in the picture. 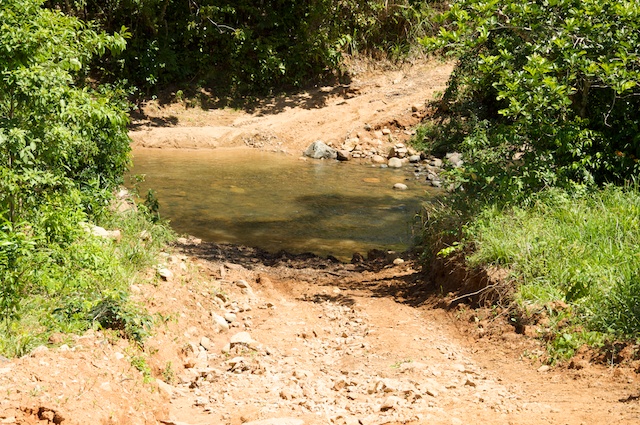 It was beautiful day when the above picture was taken so we crossed without any problems. Now that we are on the other side we are going to climb a little hill passing the entrance to the residence of Sr. Serafin to the left. 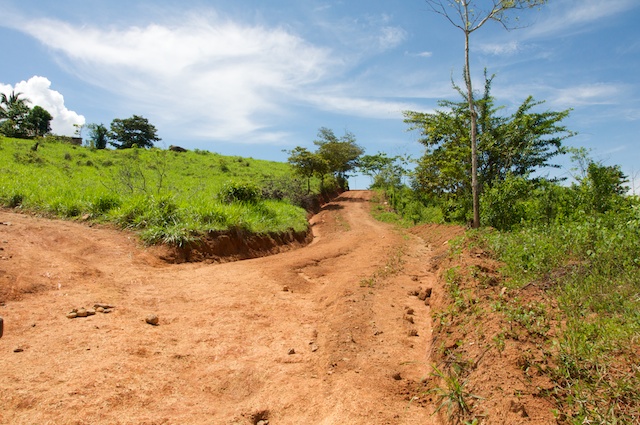 After a few kilometers opening and closing about 4 gates we reach the second river. There are so many gates to open and close on the way because this public road crosses several other farms. The road is new. As we've been told it has been built about two years ago by driving a bulldozer across cattle pasture towards a place called Playita (means little beach, although there is no ocean neither a beach :-)). This road is very fresh and when it rains the dirt turns into mud. It gets really slippery.

Next we cross the second river. 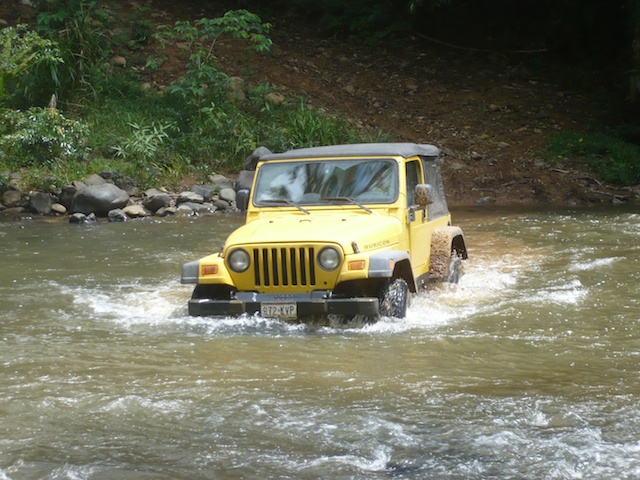 I've mentioned rain. In the above picture you can see a little tree. Here is a picture of the same river taken on a rainy day when we were unable to cross the river. You can see the little tree from above right in the middle of the picture. The river has risen about 2 meters and the current appears quite strong. So any attempt of crossing it would certainly fail and the failure would definetely be fatal. 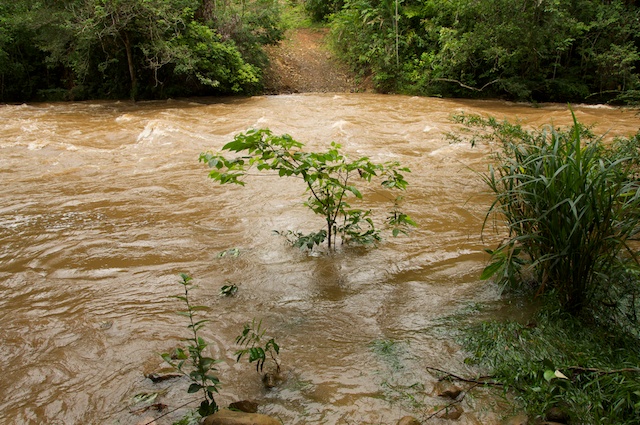 What do people in the area do to get to their homes you may ask. They use plank bridges. I did too and I can tell that I won't try it again. It's just too dangerous. Close to the other side of the first bridge - over the first river - one of the planks broke and had to hang on to the wires, which is not easy with wet hand due to the heat and humidity. Plus those wires are thin. After all it is just a steel cable and not a thick rope which you might expect. 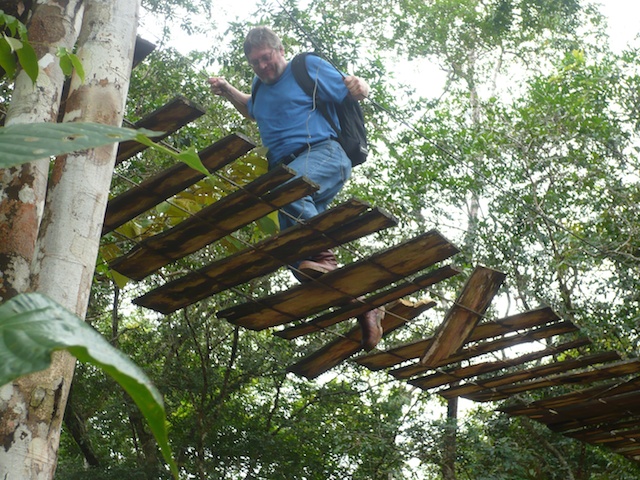 On the rainy day we walked about 3 kilometers to the second river to check it out. That's when I took the above picture and this one of the plank bridge that crosses it: 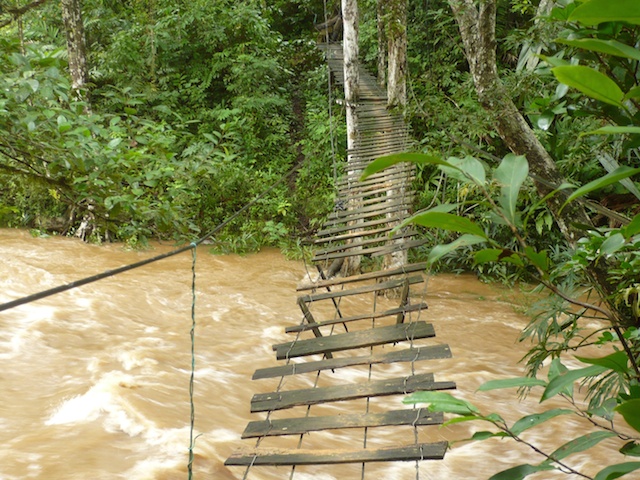 You can see that this bridge was worse than the first one. Planks were missing, certainly weak and to make matters worse that whole thing was leaning towards one side. Now imagine stepping onto slippery planks with dirty boots... I'm sure you agree with me that this is not a good thing to do. I happily stopped here and we decided to prepare lunch and head back.

After this little detour to a less lucky day here is now a picture from the sunny day when we were able to drive the Jeep all the way to our destination. This is the road we just used to get close to the farm: 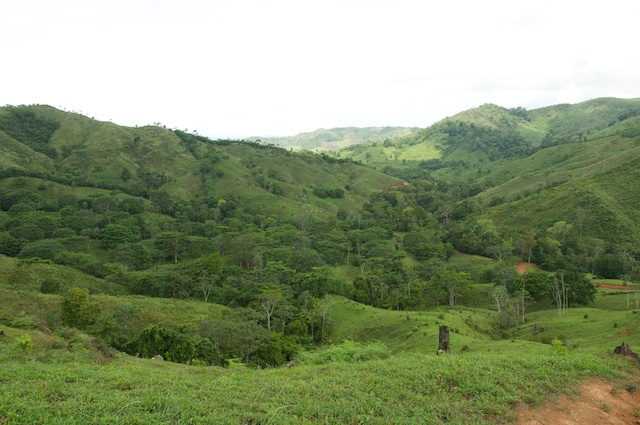 I do say "close to the farm" because the farm is not yet accesible by car. Close to where this picture was taken we have to park the Jeep and get on horses. More about that in the next post. Stay tuned ;-)