This week I had several good reasons to use the light aircraft for a business trip to Dortmund and Berlin. Dortmund lies in the far West of Germany, Berlin to the far East while I live slightly south of its geographic center.

The trip outline was:

There were several constraints:

Instead of dealing with complicated logistics and spending at least 7 hours driving I decided to take the light aircraft. On Wednesday I had breakfast with my family at 9 am, drove to the nearby airport of Frankfurt-Egelsbach, did my preflight check and took off for a short 50 minutes flight to Dortmund. I arrived there relaxed and was picked up by my contact to lunch with him.

Here is a nice picture of the Cirrus SR-20 G-OUNI parked on the ramp in front of the GAT at Dortmund airport. Regular passengers use the main terminal while General Aviation has a separate terminal (GAT). 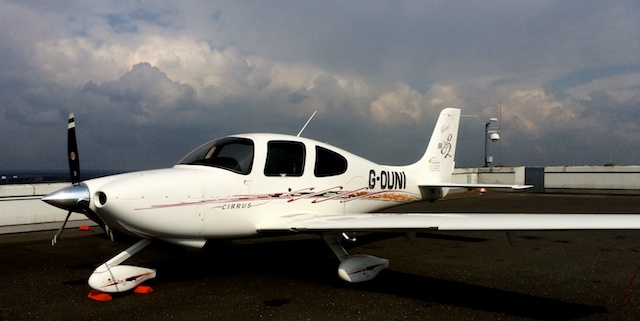 The clouds in the background do look quite nasty and in fact there were a number of thunderstorms in the area.

After lunch and the meeting my contact dropped me off at the airport at about 4 pm in the afternoon. Minutes later I was in the cockpit to get the latest weather update and do some last minute preparations for the flight to Berlin.

I had plotted a course north of any higher terrain en-route to Berlin and stayed low in order to not become stuck on top of the clouds and then get into the night. There were a few rain showers to circumnavigate. The picture shows a very small one. 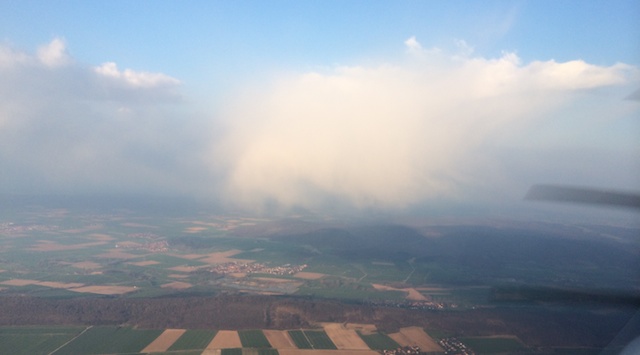 The flight took 1:50 hours. I arrived at around 6:30 pm and had a nice dinner and got to sleep at a reasonable hour.

Had I used the car to drive to Dortmund and then use the airline to fly to Berlin I would probably eaten some crappy food at the airport in a hurry, gotten to the hotel around 11 pm and be totally exhausted from a long day of driving.

Thursday was a productive day at my client with beautiful blue skies outside. However, when I woke up on Friday morning a look outside the window of my hotel room showed a different picture. It was a grey morning with low clouds hanging over the city. A look at the forecast did not provide hope for a VFR flight in the late afternoon to Frankfurt-Egelsbach. The eastern part of Germany was under an overcast. Not very thick but too low for a cross-country flight.

There would have been no problem for doing it IFR. The departure in Berlin would have been IMC for a short moment, then a beautiful flight in VMC on top followed by a VFR arrival at Egelsbach where the sky has been blue all day long.

Unfortunately, I’m not ready for that yet. :-(

So I did the most prudent thing and let the hotel know I’m going to stay one more night. Family at home wasn’t happy but then they were for my decision to play it safe.

On the bright side I was able to attend the Culture Hacking Meet-Up and see some friends and business partners there. It is a monthly event and happened to be scheduled for the very Friday I was stuck in Berlin. I did learn something about transparent salaries at several companies, we developed several culture hacks to open cracks in the culture of an organization for more transparency and I had beer with my friends. That’s not a bad situation to be stuck in.

The next morning arrived and the weather over the city center of Berlin was looking quite good: blue sky.

However, the closer I got to Schönhagen, a very nice airport for General Aviation a bit outside the city, the more obvious it was that I will not take off right away. 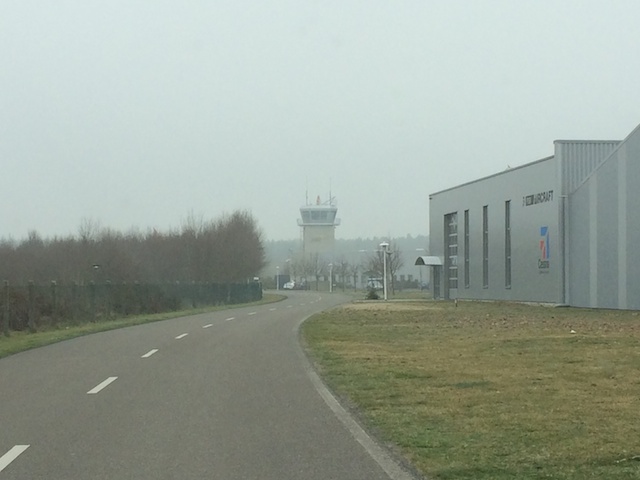 While I was waiting I heard another pilot calling in from the vicinity of the field. He had departed at another Berlin airport (Schönefeld, EDDB) and wanted to land. He was advised that it is not possible due to the fog and minutes later I could hear the aircraft fly over the airfield.

Eventually the thick layer of fog in the area was burned away and finally everybody waiting was able to take off and be on their way.

Mist and fog are two different things but both restrict visibility. After the fog on the ground was gone it was safe to take off. During the climb-out the visibility wasn’t great due to the remaining mist in the area. That changed after I got higher as the bottom of the controlled airpace overhead rose.

However, there were still large patches of fog and mist. These pictures were taken somewhere north of Leipzig. This is the view to the south towards Leipzip: 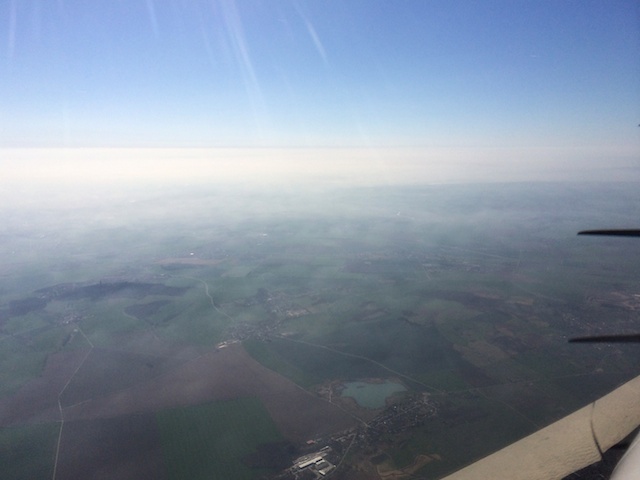 And this is to the north: 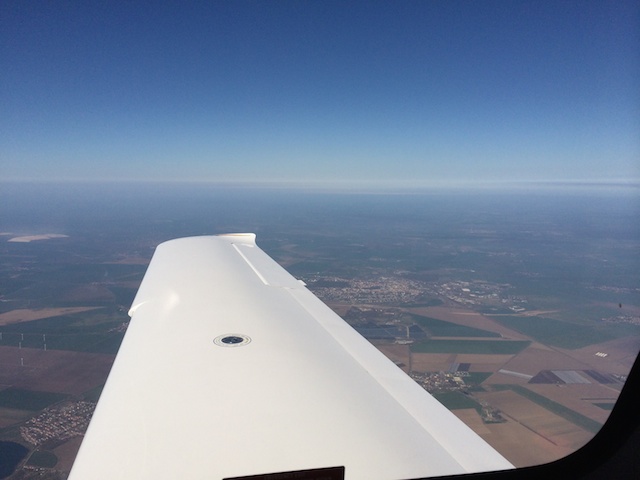 After 1:46 hours I landed at Frankfurt-Egelsbach and arrived home for a late lunch with my family. I was never in a hurry, did not had to run and then wait for the airline system to process me, had not had to run on the Autobahn - it was a pleasant trip and I don’t mind that it took another night on the road.

Once I am able to fly IFR I will have less limitations - after some practice shooting approaches in actual IMC, of course.