Chinese is quite an interesting language. I’m now in China since end of June to coach several teams on Acceptance Test-Driven Development. So far I’ve not worked directly with a product team but instead have been working with a group of people tasked to provide tools and advanced concepts to product teams. We do spend quite a lot of time to make ATDD tools and teaching material suitable for Chinese developers. And it turns out that that in itself can be a challenge.

Language shapes how one things and the way of thinking shapes the language. Other factors, like culture and history, influence further. Before I left Germany for China I expected to encounter a lot of significant differences and was eager to find out what these were. After all the Chinese culture is more than 5000 years old.

Now that I’m in China I discover a few interesting points:

I don’t speak Chinese. All that I say in this blog post is based on observation and conversations with native speakers.

As an example I’d like to use the English word collaborate. Collaboration is quite important to ATDD and agile development practices in general. I was quite surprised to learn the following.

Do we want to cooperate or collaborate?

One can use Google’s translation service and it will tell you that collaboration in Chinese is:

However, I was told by my Chinese associates that this translation were not right. Instead they prefer to write:

合作 gets translated by the Baidu Translator to: 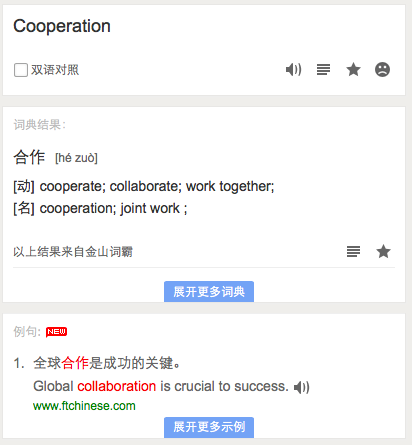 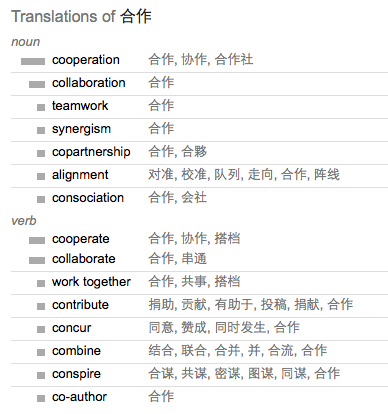 And just as Baidu says my Chinese associates told me that 合作 indeed has the meaning of cooperation in the sense that people or organizations work together while staying seperated from each other. Just as for me to them cooperation is a lesser form of working together than collaboration.

Worth noticing is that Google Translate shows a ranking for each potential meaning and while it seems to agree on cooperation as a noun it ranks cooperate and collaborate equally as a verb. Interesting is that other meanings of 合作 as a verb can be negative. Amonst the list of meanings is conspire and that is certainly not a good thing to do in the context of working as a team. 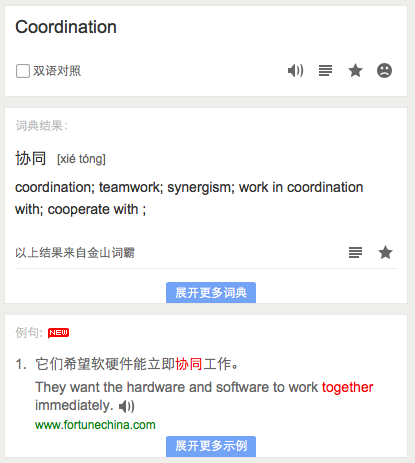 while Google knows just this about it:

Which form of collaboration do we want in software development?

Learning about those differences in interpretation I am now thinking about which form of collaboration we want in a software development team.

I don’t have an answer at the moment so this is going to be an ongoing process but I intend to come to this topic and follow up in a little while.