Is uncovering issues an issue?

Improvement requires that there is something that needs to be improved. If everything is just perfect or at least well enough so that everybody is happy, then there is no need to change a thing.

That sounds like commonplace wisdom. But then look a bit closer.

Improvement requires issues to exist. And it does require people willing to look for those issues.

My team coaching work here in China has been an interesting anthropological study so far. I try to learn as much as I can about contemporary Chinese behavior in order to tailor what I do or propose to my coachees.

In my attempts to nudge Chinese team members to find issues in their work process, collaboration with their team mates, in the interface of their workgroup/team to the rest of the organization, etc. I discovered that Chinese really dislike to uncover issues.

Some told me that the person who uncovers an issue usually will be made to fix it himself by the boss and so they rather prefer to keep quite. Apparently it is also quite likely that one will be seen as a troublemaker and therefore not considered for important work anymore.

A first hint of why that is can be obtained from this website aimed at pre-departure orientation for Chinese students. Chinese want to avoid direct confrontation, open critisism, and controversial topics. They are more concerned with maintaining harmony and to not loose their face.

Does uncovering issues always lead to a confrontation that one probably want to avoid?

I don’t think so. I think intention matters. If I want to improve what we as a group do, then my intention is to improve - not to harm anyone.

No trust leads to confrontation

However, if the members of the group don’t trust each other, then uncovering issues can easily lead to confrontation and any issue found can be used against someone who may be framed as the one who causes it or who doesn’t do anything to prevent it from happening.

If I need that person’s support for something important to me, then I may refrain from uncovering the issue out of fear that person will then retaliate by not supporting me anymore.

If lack of trust is an issue within your group, then maybe you want to consider the help provided by the trust artist to improve your relationships before you go out and start uncovering issues.

Given you have enough trust between you and the people around you, then it is probably also acceptable to fail and then you can safely perform experiments. The good thing about doing an experiment is that it’s temporary. If the results are not as what you have been hoping for, then you don’t have to continue. Try something else instead to see, if it works better.

The following image shows how I explain to teams improvement through experimentation and what my own role is in this scenario. 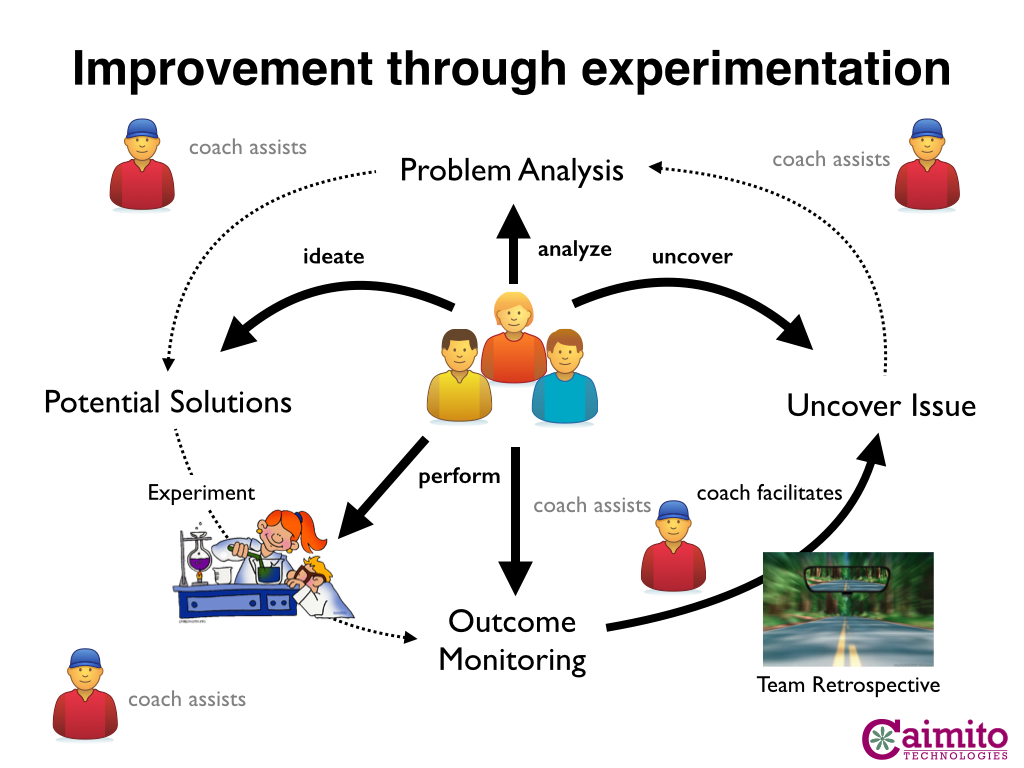