Never ever in my life so far I’ve been building anything bigger than a few shelfs in my room as a kid. I’m not a professional carpenter but I do admire what carpenters do. Wood is such a wonderful material and working outdoors on a sunny day in nice surroundings, like the one on the farm, provides a lot of stress relief despite the fact that it is hard work. It’s kind of going to a gym to exercice and sweat but a bit more productive :-)

So here is an account of my very first attempt at framing walls. I got my rudimentary knowledge from this book: Complete Book of Framing: An Illustrated Guide for Residential Construction. A bit on the history of this type of framing can be found on Wikipedia.

It all begins by cutting 5 cm x 15 cm boards to length. In this case they are going to be 220 cm long. Given that there is a bottom plate and eventually two top plates that makes it a wall height of 235 cm. There will be an open ceiling roof on top which makes the room height feel comfortable.

The pieces are laid out on the floor before nailing everything together. I really do like the ease of that. You can see the wall take shape and even without any plans you can easily understand where to place doors and windows. 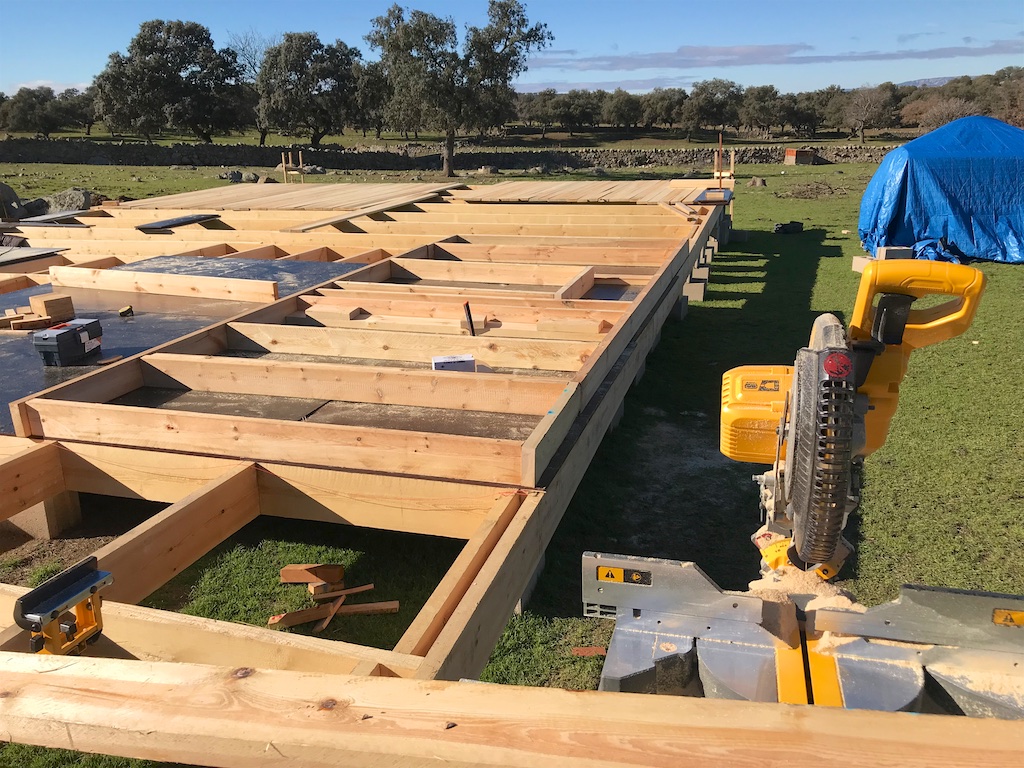 Once one is happy with the wall layout the nailing begins. 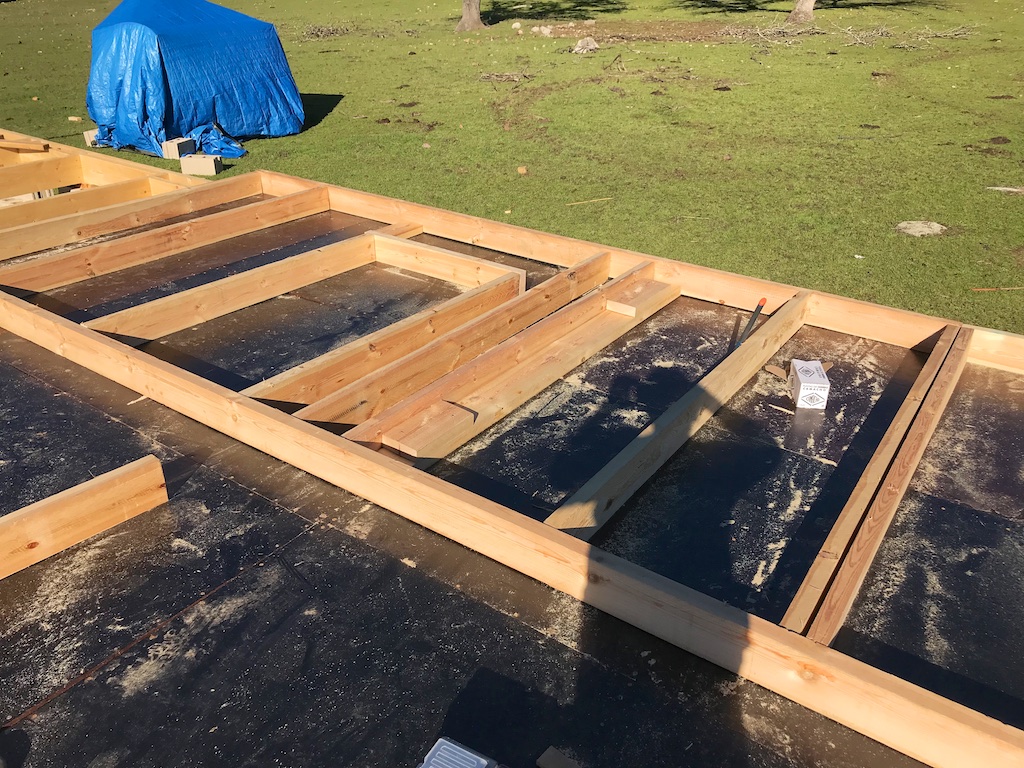 I was alone at the construction site and had a strong desire to get this wall up. I only nailed the most important pieces in place and figured that I can add the other ones once the wall is standing. My hope was that I might be able to lift the wall myself. So I took to the storage area and got the farm jack out. It’s capable of lifting 3.5 t of weight and certainly will have an easy job with that wall.

Yes, it lifted it up without much sweat.

I then put a stick under the wall and had it set against a block of wood screwed temporarily to the floor.

I went with my shoulder under the top side of the wall and felt that I can hold it. The stick that was holding it before fell away and now I was the stick holding the wall.

“So far so good” I thought to myself and made an attempt to lift it up a bit further. That turned out to be quite difficult.

Now I was stuck.

Unable to lift the wall any higher and unable to grab the stick or any other supporting element to hold the wall I was in an awkward position. There was nobody around to help me out.

As the heavy load on my shoulder was draining my strength I decided to let gravity take over and made a quick jump backwards to get out of the way of the falling wall. 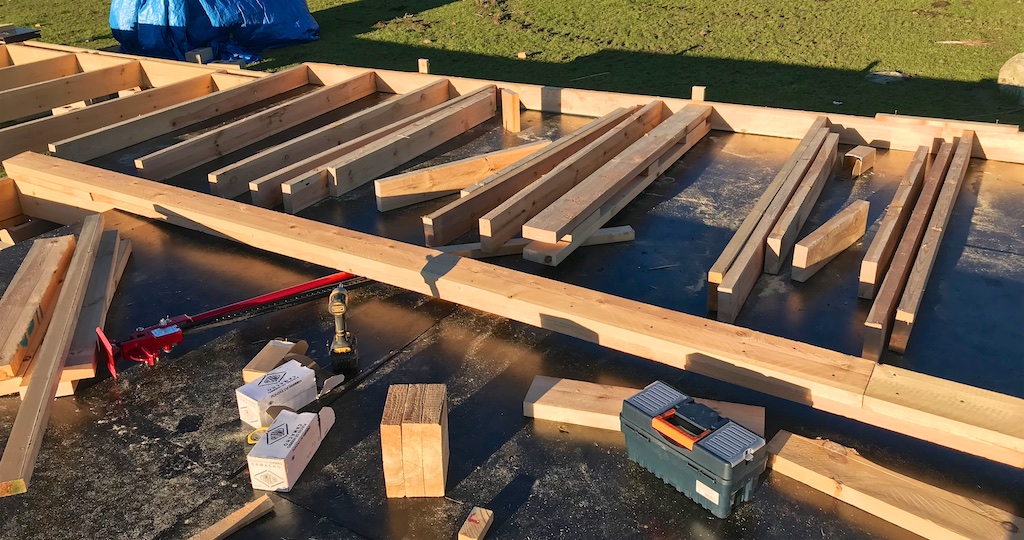 The two top plates sheared off nicely as nails are not good when a force is pulling on them. Usually forces are sideways or pushing down so that’s not a problem. In my case the whole wall sustained the fall nicely and fixing it just required a new top plate.

I then sent the picture of the crash to my neighbor and asked for his help. The next day he came with the tractor and raising the wall was a no event this time. 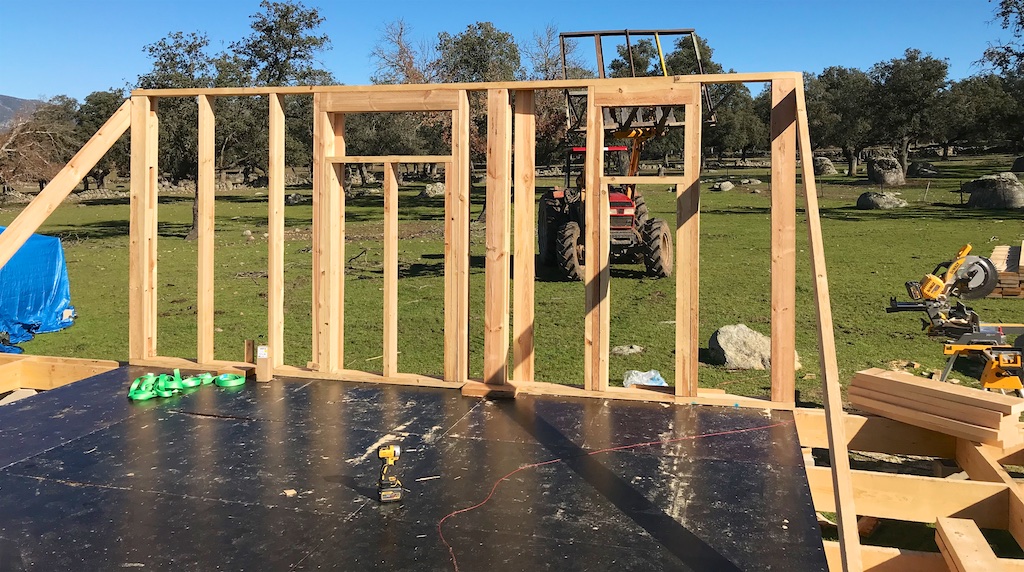 This type of construction is pretty much unknown in this area of Spain. All houses are made of concrete and granite stone and steel posts and supports. He was quite intrigued by my “strange” way of building a house.

The same day I continued cutting end laying out two more walls to be ready for the next tractor job. 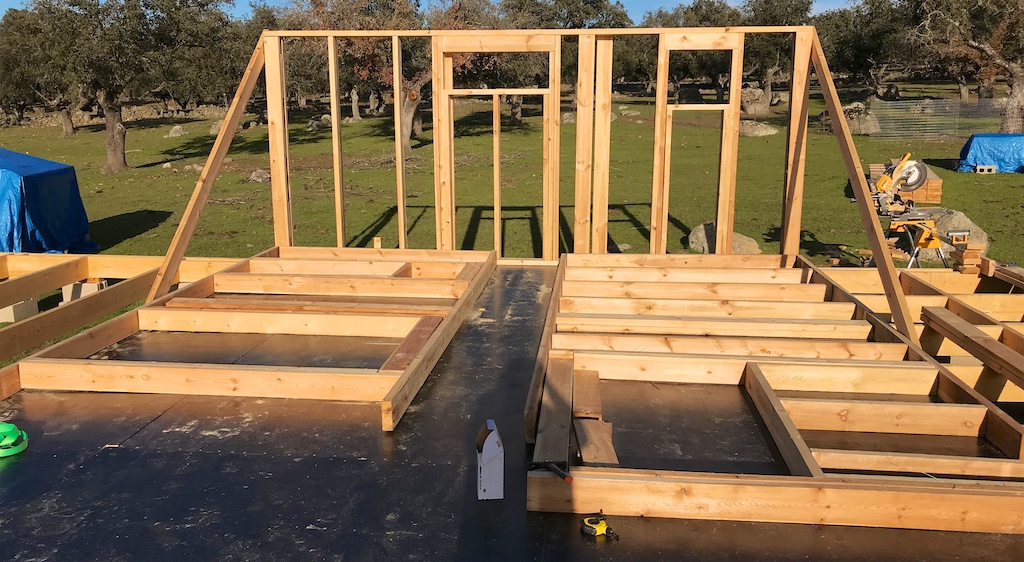 Nailing by hand vs nail gun 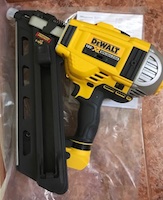 So far I’ve been nailing by hand as the nails for the nail gun had not arrived in time. The nails are 3 mm x 80 mm with a flat head. It takes a few strokes to sink them into the wood.

Eventually the nails for the gun arrived and now I’m so happy! Nailing the floor is a breeze with the gun. It can be set to fire on contact which means you hold the trigger and then just push the gun down to the material: boom! That way I can nail a plywood to the floor joist very quickly. Probably in the same amount of time it takes to drive in two nails with the hammer I can put in all the nails around the circumference of a floor board. That’s progress!

Here in Spain one cannot readily buy this type of nails in any hardware store. Wood construction is not common and much less do people know a nail gun. I’ve not seen one in Germany before either. It used to be a thing associated with American construction techniques to me.

The nails for the gun are also a bit thinner than those to drive in with a hammer. That’s a good thing as thinner nails avoid splintering.

The gun jammed a few times and I had to figure out how to unjam it. Not all situations were the same and I ended up hammering myself again while the guy with the tractor was waiting. By now I’ve learned how to handle the issue.

The gun is also quite heavy. It makes sense though. One is supposed to slam it against the wood so that the teeth at the muzzle sink into the wood. That helps when driving in long nails as those 90 mm ones used for framing.

My nail gun also came with a protective cover for these teeth. When nailing siding panels you don’t want the teeth marks. That cover makes the framing gun also a siding gun as it’s called. 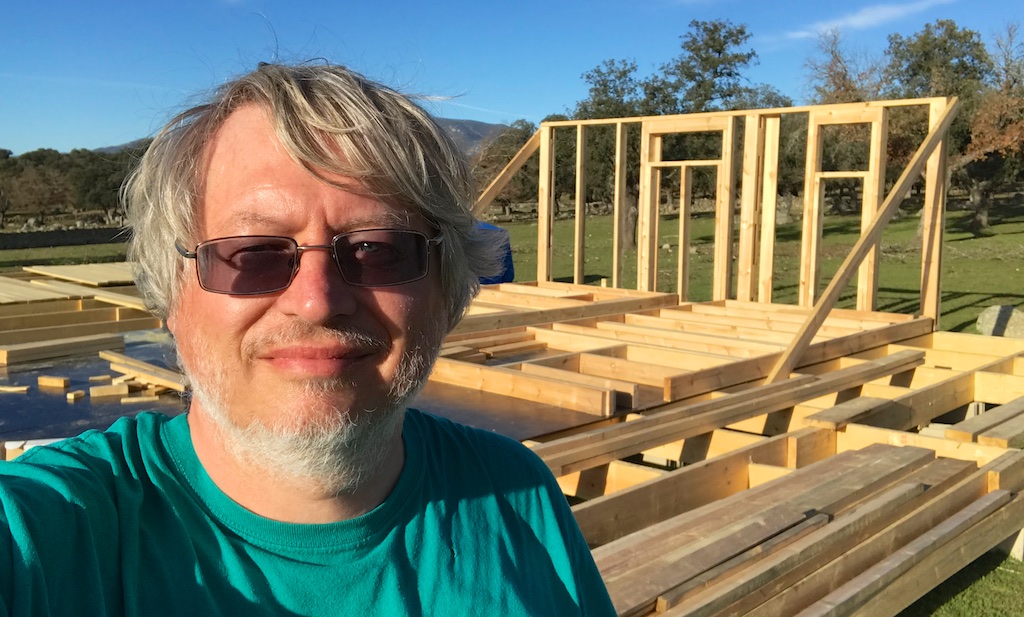 Before the neighbor with the tractor arrived I used the nail gun to nail together the other walls. 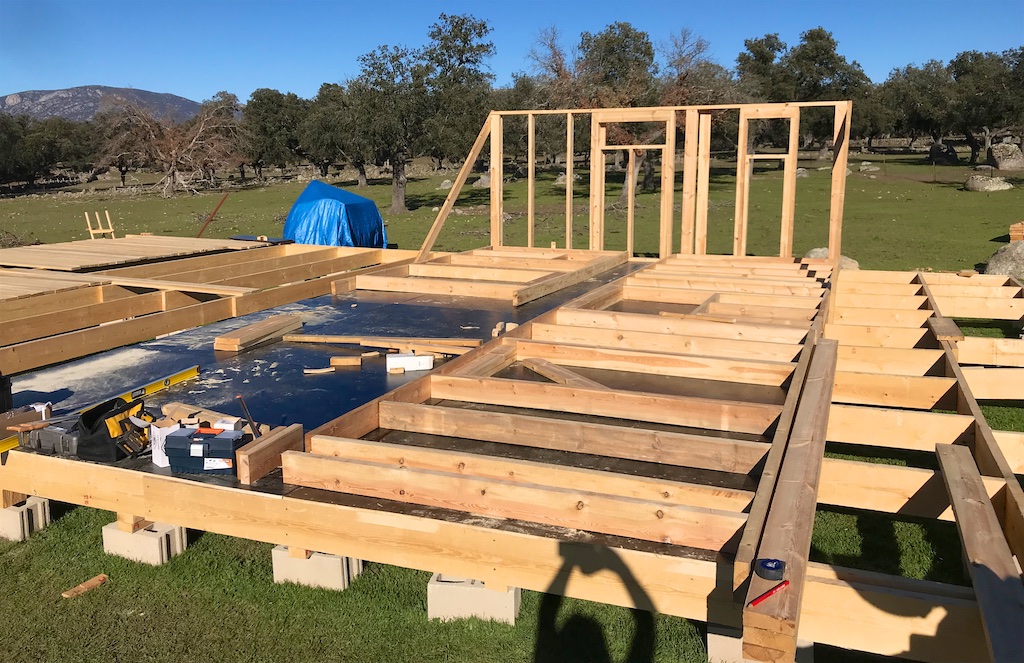 We then lifted up two of them and we now have a structure that resembles a house.

The two side walls are not yet attached to the floor as I want to be able to move them around a bit to keep the structure square.

Unfortunately I ran out of material and cannot build the remaining two wall segments to complete the exterior walls. We can shift to other tasks like planing the boards for the deck area and paint the whole thing with protective oil against fungi until more wood gets delivered in a few days. 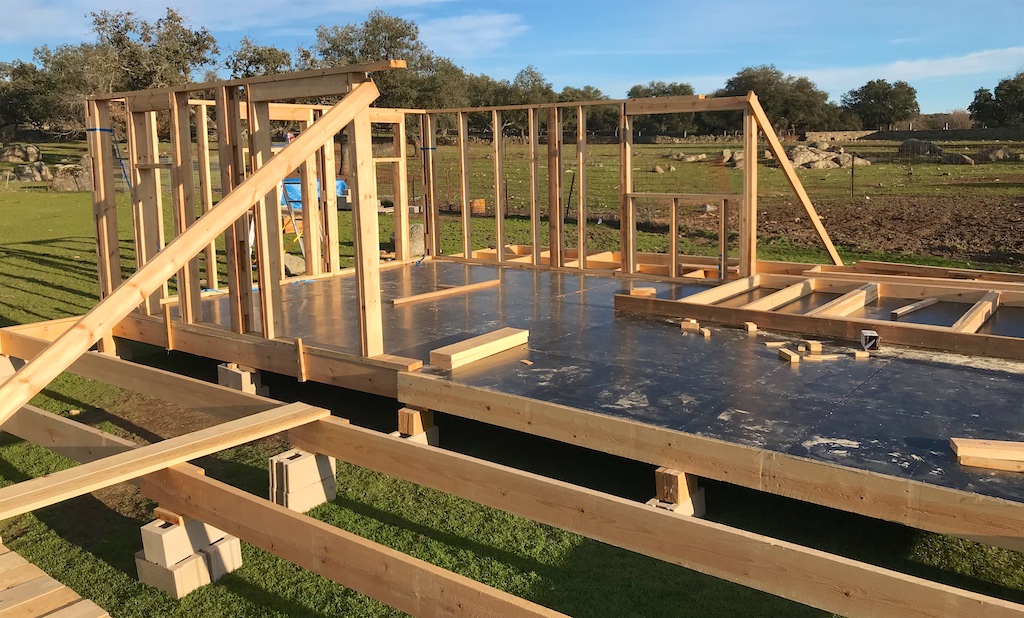