ALE2013 - Use of Real Options When Flying VFR

This August I wanted to travel from Egelsbach, Germany, to ALE2013 taking place in Bucharest, Romania, in a light aircraft. The aircraft has a safe range of about 4 hrs plus a 30 minute reserve. A quick look at the map shows that the total flight time will be more than that and so a point somewhere in the middle of the overall distance was choosen.

The general routing is depicted by the blue line. It goes from Frankfurt-Egelsbach to Sarmellek at Lake Balaton in Hungary and on to Bucharest, Romania. 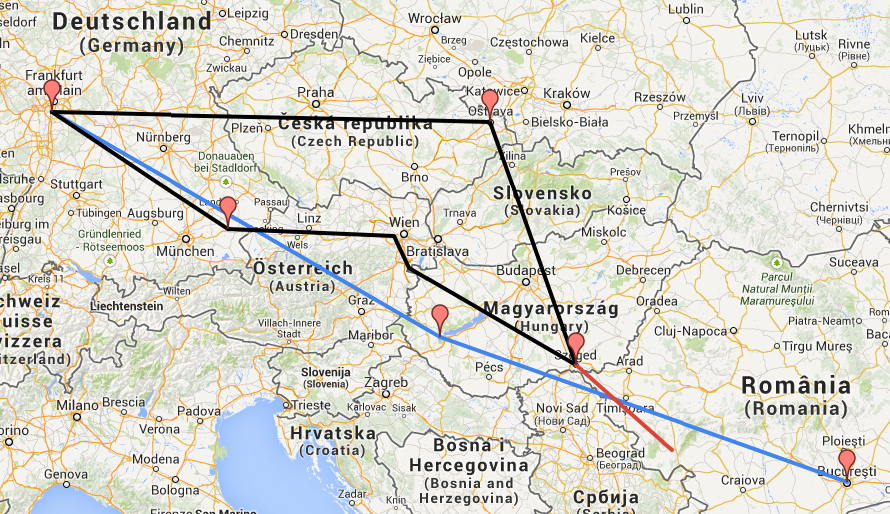 The conference will start on Wednesday with many participants arriving on Tuesday. As the two legs will probably be of about 3 hours each the plan needs to include some time to have lunch and refuel the aircraft. The ALE conference welcomes kids and spouses in order to combine a business trip with some family vacation. We are a family of three with a small child. To make it less challenging I decided to spend a night at our stopover in Hungary and then continue the next day.

Based on that the plan was to leave on Monday, continue on Tuesday and then leave Bucharest on Saturday with a return on Sunday.

As I am not an instrument rated pilot I need to stay clear of clouds in all phases of flight. Although the aircraft (a Cirrus SR20) is equipped for instrument flight I don’t have the required training and any attempt to do it nonetheless would not only be a violation of the rules but also likely kill me and those I carry.

Therefore the first dynamic constraint for the trip is the weather.

A few days ahead of my schedule I started to watch the overall atmospheric conditions in Central and Eastern Europe. It happened that there was a negative forecast for Monday with similarly bad weather for Tuesday. Sunday also didn’t look too good. Basically crossing the eastern part of the Alps would have been difficult and I didn’t want to accept the risk resulting from the forecasted conditions.

However, it was a long-term forecast. Weather forecasts cannot be trusted for more than about three days in advance and even then the atmosphere is a very dynamic environment…

So I started to look for options.

Commitment: Leave Ahead Of Schedule

By Friday it appeared that the weather in Eastern Europe will be very good (cloudless sky) but there will be a challenge to get there from Germany on Monday and even on Sunday. So I decided to leave early on Saturday and make it as far East as possible to be away from the bad weather.

The value of that option was to be able to make it to ALE2013. The price was the cost of about 2 hours of additional flight time plus accomodation for the extra day. This option was about to expire on Saturday as the forecast for Sunday said it will be difficult to leave Germany.

Now that we got far enough to the East the routing (read the plan) had to be adjusted. Our layover destination Ostrava in the eastmost part of the Czech Republic was too far away from Bucharest to make it in one go. In addition and contrary to the former forecast bad weather in the form of predicted thunderstorms and more clouds had shown up over Romania. As the Karpatian mountains north of Bucharest are equally as high as the Eastern Alps, I didn’t want to experience challenging weather over challenging terrain.

Far away from the destination but with plenty of time the first choice for the next destination was Debrecen in Hungary. Flying there would get me close enough to Bucharest and keep the additional flight time at minimum. It is more or less a straight line from Ostrava to Bucharest.

However, I learned that the Debrecen airport closes at noon on a Sunday. With about 2 hours of flight time I would have to be in the air before 10:00 and there is usually always some delay. I would have had to make the family rise and be ready quite early to then sit at the airport waiting.

Further there was an issue regarding flight planning. When overflying Slovakia the flight path will cross two restricted areas. Those are usually for military exercises. Unlike many other restricted areas these were not marked as “on weekdays only” but instead the information was that their activation time will be published in some European Airspace Usage Plan - a document not easily available to me.

Option 1: Plan flight with a larger detour around restricted areas with destination Debrecen.
Value: Essentially this option has no value, as making it to Debrecen is not of particular interest.
Cost: The price for the additional flight time.
Expiration: Expires, if not airborne slightly before 10:00 AM.

Option 2: Plan flight through the restricted areas and arrive very early at the airport to get clarification from the local briefing office in order to still make it on time to Debrecen.
Value: Essentially this option has no value, as making it to Debrecen is not of particular interest.
Price: Making the family get up very early, very quick breakfast and then have them wait at the airport.
Expiration: Expires, if not airborne slightly before 10:00 AM.

Evaluating the three options it quickly became clear that only option 3 has some value while the others have just cost and expire early on. So I picked Szeged as next destination in Hungary. Szeged is located in Southeast Hungary and a direct flight path from there to Bucharest keeps you south of the Karpatian mountains.

It turned out that I was busy at the briefing office and with the handling agent at the airport almost 2 hours - just to figure out the likely answer to my question about the restricted areas myself and then get the clarification from Slovakian ATC in the air. The very friendly lady working the briefing office didn’t know how to find the information and her calls to Slovakian AIS (briefing office) went unanswered on a Sunday morning.

If I had choosen any of the two other options, it would have expired and probably I would have been forced to land somewhere else anyway.

Change Of The Environment

The next forecast in the afternoon (Sunday) showed that Monday will be a day with low ceilings in the whole area. Bucharest was still in the clear but it would be unlikely to be able to leave Hungary VFR towards Romania. We were hoping to simply do some ground activities, eg. take our child to the local Zoo. Unfortunatly the next day started with fog and rain and it never changed.

So we sat idle but not worried at all, because the forecast for Tuesday was still looking good.

Commitments Based On Insufficient Data

According to the forecast the weather in Szeged were to improve by noon. So we didn’t plan on being early at the airport. The forecast for the en-route section called for some cumuli and I expected to be able to go on top of them to descend before reaching the boundary of Bucharest’s class A airpace (limited to IFR flights).

However, we didn’t count with the authorities. One member of our family is not a European citizen and we were about to leave the European Union. That alone shouldn’t be a problem but we learned that the area is also known for a lot of illegal activities and the Hungarians are closely monitoring everything that is going on there. So what could have been a one minute passport check turned out to be a two hours procedure with many phone calls by the two police officers. Add to that the fact that they hardly spoke any English or German and you can imagine it would have taken much longer had we not had the help from the staff of the Szeged airport.

Eventually we were airborne by early afternoon. Cumulus clouds had developed (common in the afternoon of a sunny day due to moisture rising into the atmosphere). According to the weather forecast model there should have been less of those clouds but they didn’t pose any threat.

60 or 70 nautical miles into Romanian airspace we found ourselves over a layer of scattered cumulus clouds with a base at 3000ft and reaching up to 6000ft. In front of us were two nicely visible cumulus nimbus clouds - a thunderstorm in development.

The forecast did not mention anything about a probability for thunderstorms in the afternoon. It did mention scattered cumulus clouds. I assume that the amount of data in that area is not as high as elsewhere and therefore the metereological model were off.

So I quickly decided that it will be too risky to continue or stay in the area looking for ways to go around the thunderstorm. Plus the current weather report for Bucharest had already deteriorated to broken clouds in 3600ft - which is essentially a solid cloud layer for a VFR pilot. That turned out to be a wise decision. On the way back to the Hungarian border the small scattered cumulus clouds we overflew 30 minutes ago had developed into small towering cumulus and I had to fly around them. We landed safely in Szeged again to look at our options.

Keep Yourself An Out Option

Although we did try to make it to the destination after the huge delay and got burned I do want to mention an important option that you should never let expire: keep yourself an out option.

The following are examples of out options in aviation. There may be different opinions about those options amongst the aviation community. As this blog post is not primarily about aviation and pilot decisions but about a practical application of the concept of real options, I will keep them short.

Option 1: Stay where it is safe
It is much better to be above the clouds with good visibility than under the clouds in low visibility and close to an unknown mountainous area.

Option 2: Be able to return to good weather and land there
It is ok to overfly an overcast area where one cannot descend through the clouds, if there is information about nearby areas with good weather. Close monitoring of the situation is important.

Option 3: Carry enough fuel to be able to execute all options
Aircraft don’t fly far without fuel, therefore to carry enough fuel and watch how it is consumed is important. One is not able to return to good weather when the engine quits.