On The Development Of Capabilities

This week my schedule calls for some full day activities at a client in Berlin on Tuesday and some activities at another client near Remscheid on Wednesday and Thursday. I am based near Frankfurt. Berlin is to the far East from me and Remscheid to the far West of my position.

There are multiple options for being able to visit client companies that are located in different corners of Germany within the same week. I chose to invest in my capability to transport myself in a light aircraft for the reasons outlined in my writeup about business travel in light aircraft.

After regaining my basic pilot license earlier this year I was already able to take advantage of that capability on similar occasions. It is now two times that I had to see people at the two locations mentioned above within the same week. That resulted in three very pleasant flights each time.

But this week is likely going to be a bit different.

Aviation weather forecast for a flight from Frankfurt to Berlin

Today (Sunday) I’m looking at beautiful weather with some light cumulus clouds and good visibility. Perfect weather for flying VFR. However, the forecast for tomorrow tells a different story: 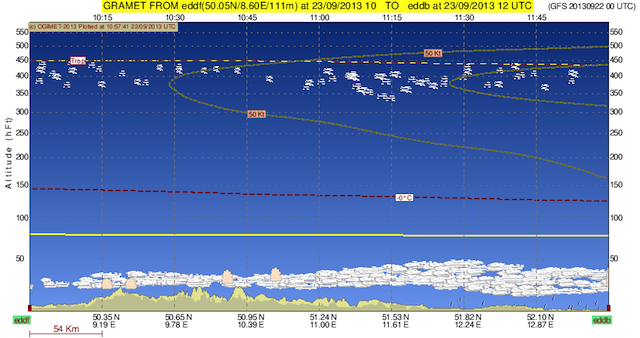 Early in the morning there will be a cover of low-level clouds all over. The image above depicts the forecast for a departure around noon and the 2 hours flight time to the destination. It appears that by noon the clouds might have disappeared mostly in the Frankfurt area but the low-level cloud cover will still exist all the way to Berlin.

The yellow line is set at 7500ft, which is my preferred en-route altitude going eastwards.

Being halfway still means you won’t make it

I have invested into my abilities as a pilot so that I can take advantage of quick, easy, and flexible air travel on my own schedule. The resulting capability is supposed to provide value to my business as a coach and also for my family and me as individual. (I won’t go into details now as it would dilute the point I’m trying to make.)

After the reactivation of my pilot license I am allowed to and able to fly light aircraft during day time in what is called VMC. The three letters stand for Visual Metrological Conditions and basically it means: stay away and out of the clouds, see where you are going and navigate by looking out.

It now appears that this basic ability is not enough as capability for performing my business trip to Berlin tomorrow. So in the end I’m not yet good enough and won’t make it.

In my case I can fly an aircraft - I possess that skill. But I don’t have the capability for flexible air travel for business purposes - yet.

Here is a rough list of what is missing to gain and maintain the capability flexible air travel for business purposes:

Those four things contribute to having the capability. The first one is a skill that requires an investment in learning. The second and third one refer to the proper equipment, which can be procured by purchase or lease. The fourth one is a question of choosing the proper location.

If I fail to provide any of these factors contributing to the capability, I will either have a degraded capability or won’t have it at all. How bad that is depends on how important the quality of the capability is to my business.

Acquiring a capability is a long and winding road

There is no best way to acquire a capability. There are many good ways to achieve the goal and there are many other factors, about which one doesn’t know much in the beginning, that lead to changes or even to the abandonment of the pursuit of the capability one was after in the first place.

Based on past experience and some common sense I know that I need an instrument rating to fly on a more stable schedule. Being limited to VMC operations it is likely that I will have to cancel flights, and therefore client visits, or seek a different means of transportation which may or may not be available or get me to the destination by the time required.

As of now I have access to an instrument rated aircraft that has no protection against icing. I know that this is a limitation for about half of the year as freezing levels will be rather low and without protection against icing I would not be able to climb through clouds. That means I know about a limitation that leads to a degraded quality of the capability. However, I may find that the remaining quality is still good enough. This is one of the known unknowns I may find out more about by performing experiments.

To mitigate the potential degration in quality of my capability I can acquire a more capable aircraft. That leads to more known unknowns. As of now I know the cost of flying. I pay a fixed amount per hour to the owner of the aircraft and I have permission to go on a multi-day trip paying just the time I actually run the engine. Unfortunately I already know too that I have a very sweet agreement that is extremely rare to find. So the solution to fulfill the requirement for a more capable aircraft is likely to purchase one or lease one. That in turn leads to a bag full of known unknowns ranging from questions about maintenance over operating costs to financial risk.

The best I can do is to acquire as much knowledge from as many sources as I can find in order to understand the problem better. That doesn’t tell me whether the capability is achievable for me or not. Nor does it help me to say whether having it actually benefits my business.

In the end I need to perform experiments that are suitable to answer a clearly stated question and control risk by some mitigation measures.

The acquisition of a capability is not a straight forward process. It is a long journey and once one has embarked on it one needs to be willing to be in it for the long haul. Results may show up rather late. The more one reflects on the experiences made, the better risk mitigation measures are, the better one is able to decide on go or no-go along the way.

At the very least one may learn that a different capability is needed - something one would have never discovered without starting the process in the first place. The latter is called serenpidity and is another important concept to embrace when dealing with known unknowns and unknown unknowns.