Only a few weeks ago I started to enroll in a training class for the instrument rating. My goal is to extend my flying skills so that I am a bit less dependent on the weather. I don’t intent to fly in really bad weather. I can always wait an hour or two for the worse to move away.

However, as a VFR pilot one is quite limited. My last attempt to travel to Berlin shows that. It would have been a great and pleasant flight in blue skies over a thin overcast or broken cloud layer in probably FL75 (7,500ft). Passing those clouds would have taken maybe a minute for the Cirrus SR20 that I’m using.

Earlier this week my instructor and I went for a short flight from our home base Egelsbach (EDFE) to Zweibrücken (EDRZ). The idea was to get to know how it feels passing through clouds and get an impression of flying an ILS (Instrument Landing System).

We filed our flight plan using the proposed routing from the EDFE website. As Egelsbach is VFR only we had to file what is called a Z flight plan. That’s one that starts out VFR and then you join the IFR system once ATC picks you up.

The proposed routing was RID Y163 ANEKI MANEM Z818 ZWN shown as the magenta line in the following map. 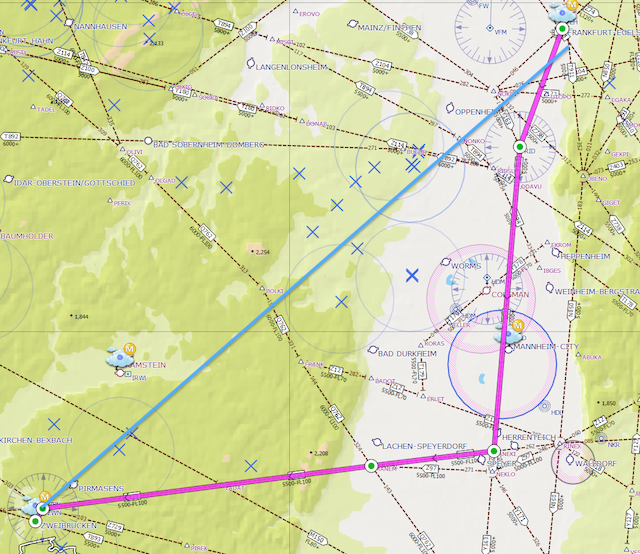 After we took off from runway 09 at Egelsbach and turned towards the visual reporting point KILO we called Langen RADAR to request IFR pickup. We were greeted and got “direct ZWN climb 3000 IFR starts when passing 2500”. So …. That was it?? The route actually flown is the blue line in the map above.

My instructor had told me that in real life controllers almost always give you a shortcut and you hardly ever have to fly the filed route which gets validated and has to be accepted by the EUROCONTROL computer system in Brussels. But skipping over 90% of the route for that flight was still a bit of a surprise.

It did make the flight a bit boring though… I had hoped for some more radio chatter with a number of instructions. All we got was a stepped climb to our filed flight level FL60 in 1000ft increments. At about 4500ft we got into the thin cloud layer and seconds later we were up in bright sunlight. Once we reached FL60 our flight path was a straight line to the ZWN VOR which also serves as the Initial Approach Fix (IAF) for the ILS at the destination airport.

Within reach of the ZWN VOR ATC cleared us for the ILS 03 and asked us to maintain FL60 for the time being. That was a good way to connect theoretical and practical knowledge. As we had been cleared for the ILS there was no need to ask for permission to start the descent once we were established on a part of the approach procedure. So we had to maintain FL60 until the ZWN VOR and right after passing it we were allowed to descent to 4000ft on track 217 (refer to the chart provided by the VATSIM community).

The autopilot was engaged the whole time so there was not much to do other than supervising what it does and to program the setup in the first step. Our aircraft made the turn towards the ILS localizer precisely at 11.9 NM from the VOR as laid out in the chart. Then it captured the localizer and glideslope and flew us down towards the runway. We had passed the clouds again, went through a few more pieces of cloud and were out in VMC at more or less 4000ft. A few seconds later the runway was in sight. At the decision altitude of 1370ft (that is 200ft above the runway elevation) we initiated the missed approach - we didn’t want to land there just use the ILS - and then canceled IFR for a VFR flight under the clouds back to Egelsbach.

When the aircraft is ahead of you

That flight was meant as an introduction. I did fly myself, manually and with the help of the autopilot, but many times I felt like the airplane was actually ahead of me and I were trying to catch up to it. When there is so much new in an already familiar activity all the new actions lead to an overload situation. Especially when I was riding along with the aircraft flying the ILS. As I’ve never done that before my instructor set up the system and I tried to follow what he was doing. I did manage to understand but always a bit too late.

There is a reason why about 50 hours of flight training are required to earn the instrument rating :-)