Today I did my first solo IFR flight in Germany. The aircraft is a 310 HP Cirrus SR22 (G1 built in 2003) with Avidyne Release 9 integrated flight deck. The flight was planned from Aschaffenburg (EDFC) to Schönhagen (EDAZ) with my final destination downtown Berlin.

Both origin and destination airports are VFR-only airfields with no instrument procedures. That means filing a Z flight plan (start VFR and then switch to IFR) was required. I used the new autorouter.eu tool to create the Eurocontrol flight plan and then filed it via the DFS AIS website. In the confirmation email the flight plan looked as follows:

The Eurocontrol flight plan would have me fly through the Leipzip class C airspace (upper right corner) at FL70. It turned out that I never saw that. Here is a piece of the route on the map. The destination is further up to the right but omitted due to space constraints. 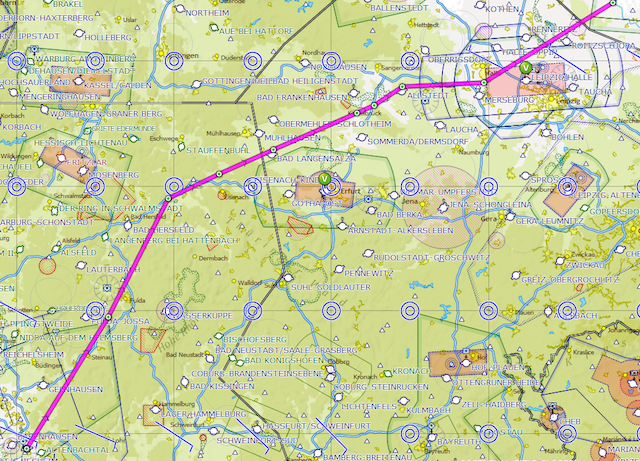 At the time of departure (1730LT) the weather in the Frankfurt area had been clearing up. There were blue patches, some towering cumulus clouds and some more benign clouds. I did a regular VFR departure out of EDFC following the prescribed traffic pattern for noise abatement. Then I left the field towards the North inbound my first waypoint KERAX. The FISO (informational radio service at non-towered airfields) had called ATC on the phone to obtain the first frequency and the transponder code to allow me to check in with ATC after airborne.

I said Goodbye to Aschaffenburg and made my initial call to ATC:

I was greeted and told:

So I staid below the class C airspace around Frankfurt and out of the clouds. A minute later I got a different frequency and upon calling then I was:

This instruction was followed by:

Over the next two minutes I was given several other climb clearances up to my planned cruising altitude of FL70. 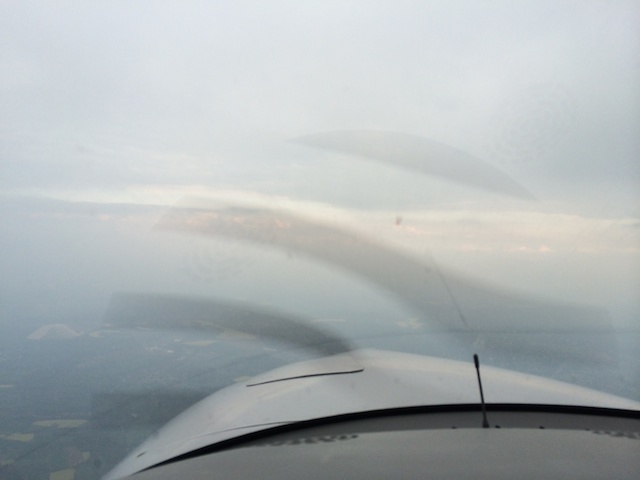 In between I was also given a slight change to my routing:

That removed the waypoint ERSET between KERAX and ERSET and shortened the flight a little bit. I modified the flight plan on the FMS page of the Avidyne R9, selected the new waypoint and hit the Direct key. Everything else was supposed to stay the same. Here I am level at FL70 in the clouds with no outside visibility: 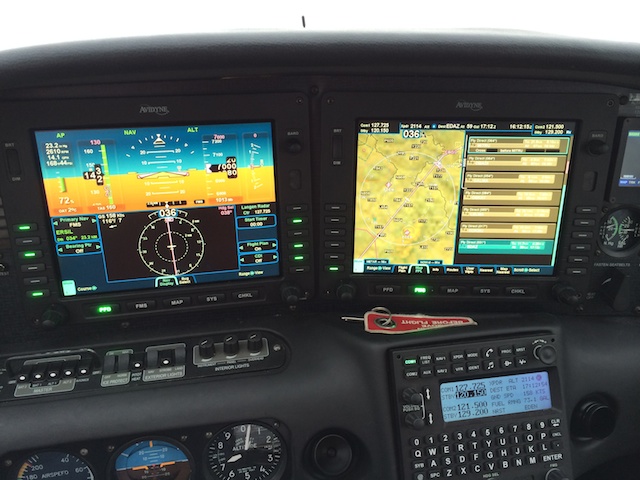 After coming up on the airway N858 at ERSIL the clouds started to disappear and, as forecasted, blue sky was ahead. 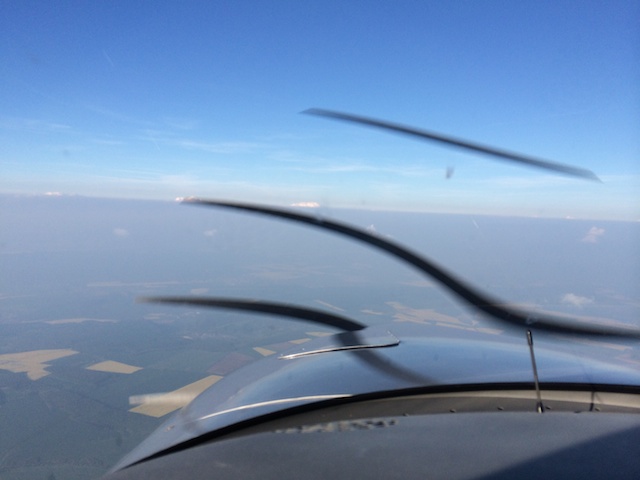 After MAXOT, a waypoint on airway N858, Munich RADAR said:

I gladly accepted that major shortcut. The controller was doing me and herself a favor. The new routing kept me out of Leipzip class C airspace and shortened my travel time to just 1:25 hours (takeoff to touchdown).

Here I am in the sunshine flying towards EDAZ: 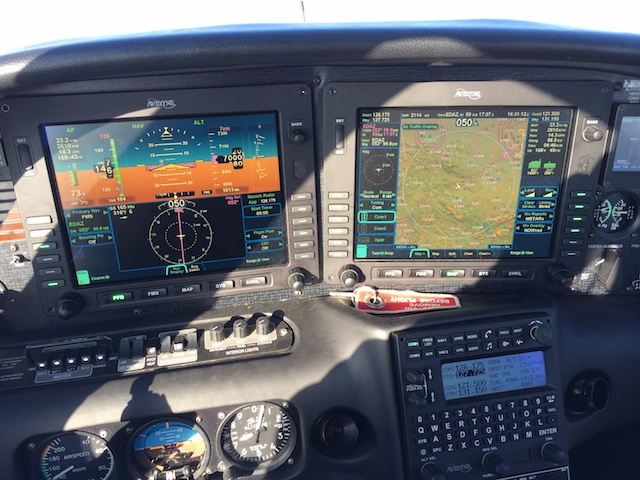 The view to the right showed a few clouds in the distance and an inversion layer that only a few cloud tops were able to penetrate. 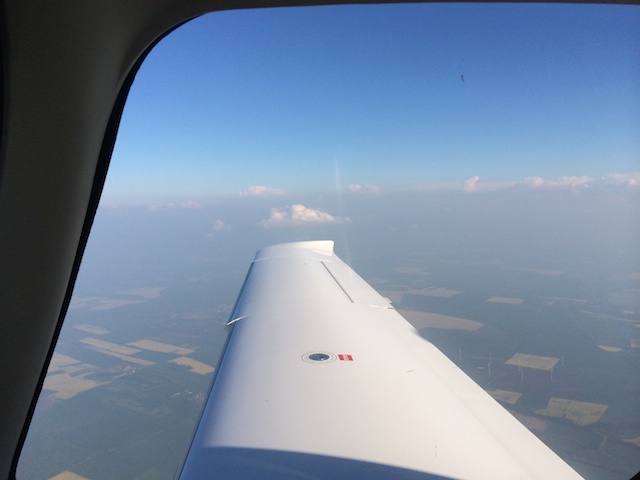 I was speeding at 165kt - 175kt ground speed towards Schönhagen just below the cloud base. 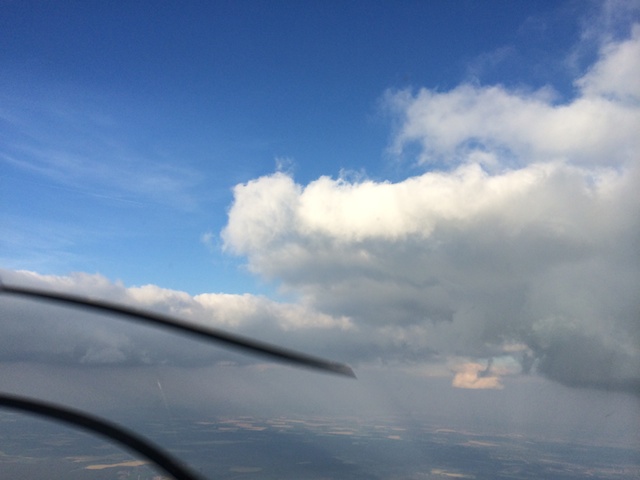 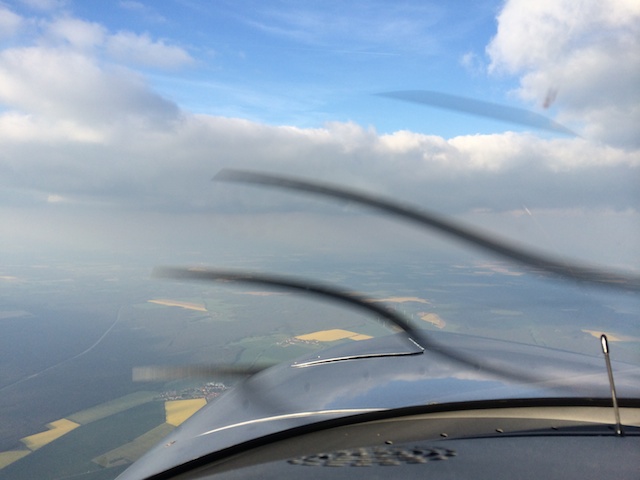 About 10 minutes before the destination Bremen RADAR said:

Advice when ready to begin descend.

This was followed a bit later by:

Descend 3600 report when ready to cancel.

Upon reaching 3600ft I was about 15NM from the destination and called in:

After switching to the Schönhagen frequency I was informed that runway 07 were in use - I already guessed that based on the wind vector on the PFD - and proceeded to perform a visual landing.

The SR22 is a bit more heavy than the lesser powered SR20. Due to the power and weight one can really fly it by the numbers. With 100kt in the downwind and base legs of the visual approach it came in like on rails. On short final I slowed it down to 77kt and touched down smoothly. The IFR flight plan was closed by the FISO and I parked for the night.