An afternoon trip to Freiburg

This is a short account of a trip from Aschaffenburg (EDFC) to Freiburg (EDTF). The airfield Aschaffenburg is located about 30 minutes from home and the final destination is a 10 minutes taxi ride from the airfield in Freiburg.

A long day trip by car

There was an appointment in Freiburg in the afternoon. There wasn’t a set time but it was supposed to last maybe 2 hours. By car the route looks aproximately like this: 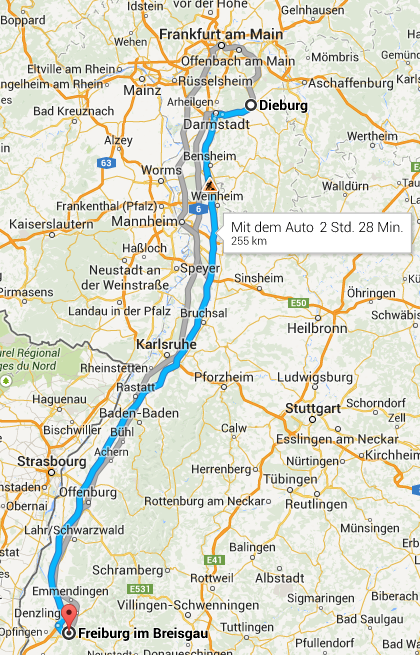 Total travel time by car is supposed to be 2 hours 28 minutes. However, it can change anytime. On the day of the flight it was rainy and downpours do slow down the traffic on the Autobahn significantly. So I estimate the travel time by car to be at least 3 hours. Driving in those conditions requires a hightened level of alertness as well.

Using the car I would have had to leave home by 11:00 in the morning to arrive at about 14:00 in the afternoon.

Filing a Z IFR flight plan from EDFC to EDTF

Both airfields, origin and destination, are VFR only airfields with no instrument procedures. Due to that a high enough ceiling for a visual landing is required or the flight cannot be performed. The other constraint is the Minimum Radar Vectoring Altitude (MRVA) for IFR flights that ATC uses. If the ceiling is below the MRVA, it is impossible to be guided down enough to become VMC and then proceed VFR for the landing.

For this particular trip the IFR part is just the en-route portion from reaching MRVA after the initial climb out of the origin and until reaching MRVA during the descend into the destination. It is basically the kind of IFR flight people will be able to do using the new European en-route IFR (E-IR).

As the origin is a VFR airfield, a Zulu flight plan had to be filed. I filed for 1100 UTC (13:00 local time) at FL60. According to the forecast 0 degress Celsius was supposed to be at FL70. Going any higher would mean to expect icing, which is best avoided.

There was supposed to be significant clouds with some isolated thunderstorms. As the flight will be short, there is no point in trying to climb high. Going high would mean to do one long climb followed by an immediate descend. That doesn’t help much to avoid bad clouds either, because during climb and descend one is in the clouds anyway.

The aircraft has onboard satellite weather, which depicts precipitation along the route. A lot of rain in some area means that there is a thunderstorm and one goes around it.

Climbing out and obtaining the clearance in flight

After becoming airborne at Aschaffenburg I called the first ATC frequency to check in. I was handed off to another controller and got a vector together with a climb clearance to some intermediate altitude.

N747TG is cleared to LIPKA via KRH.

LIPKA is a waypoint just 10 NM north of the destination airfield.

This wasn’t the clearance delivery according to the books. It was more a regular conversation, which is fine. We then discussed the cruising altitude. I had filed FL60 but looking at the towering cumulus to the right asked for FL80. During the conversation I was flying on the assigned heading with some deviation to avoid a bad cloud in between. By the end of it I was already overhead the city of Karlsruhe and abeam the Karlruhe VOR (KRH). Therefore:

I then checked the flight plan entered into the Avidyne R9 and deleted all the original waypoints that do not apply anymore. 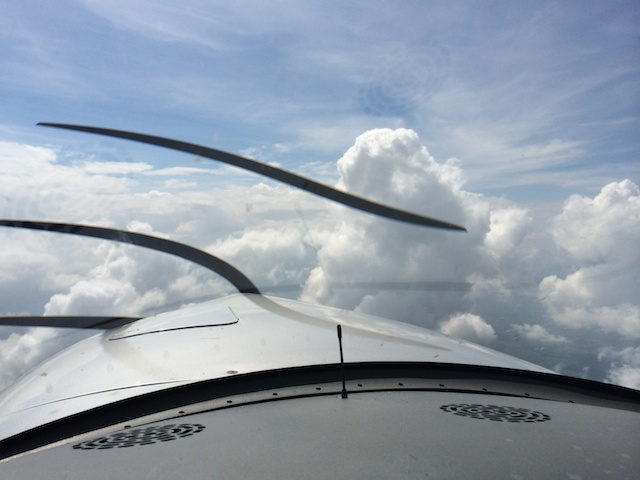 Shortly thereafter I was handed off to the next controller and immediately asked for lower as FL80 would have kept me in below zero temperatures and I was about to enter clouds ahead. I asked to go back to FL60, which was granted immediately. After a few minutes she asked:

On approach into Freiburg (EDTF)

Minutes later I was handed off to the French controller from Strasbourg. Getting closer to LIPKA and the final destination he instructed me to descend:

The outside view showed some scattered clouds below the overcast we had been flying in. 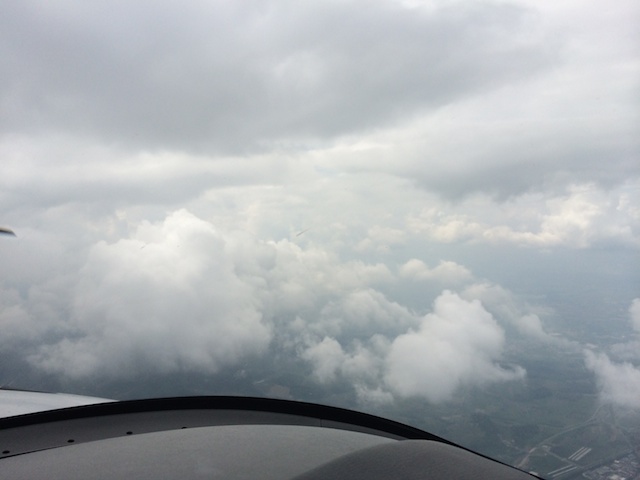 Strasbourg then took us lower in several steps. 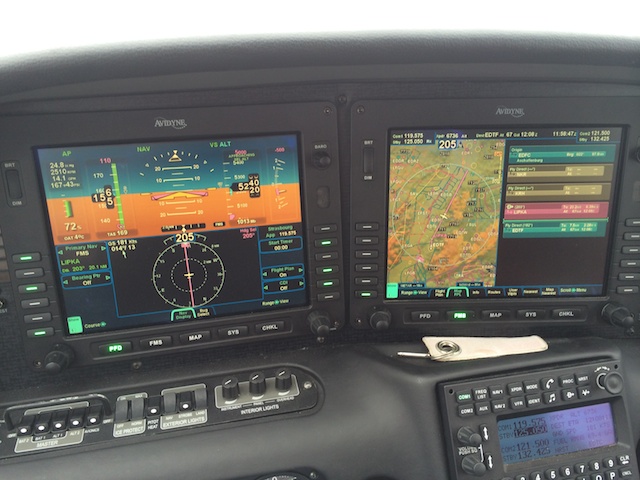 Eventually, shortly behind LIPKA, I was down to 3500ft and basically VMC with a few clouds here and there. I was about to cancel IFR but hesitated and seconds later Strasbourg was telling me:

At the time I was headed south. I turned West to 270 and climbed 500ft up back to 4000ft. It was looking at bit brighter in that direction as well.

A look at the VFR chart explains the 4,000ft minimum altitude. To the East there is a mountain top at 4,075ft. To the West an obstacle on top of a mountain going up to an altitude of 2,300ft. It does make sense to keep passing traffic at 4,000ft.

The main thing the airfield Freiburg is missing is an instrument procedure so that one can descend on a safe path. As the airfield does not have it, the only way to a landing is to become VMC somewhere in the area and then continue VFR. 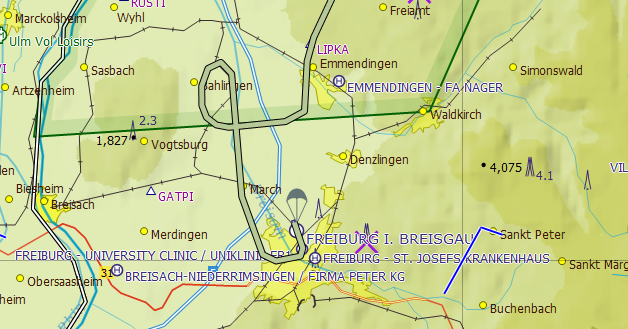 In restrospect it would have made sense to cancel IFR at 3500ft and descend a bit further while avoiding the few clouds. I was heading straight for the downwind for runway 34 at Freiburg. Due to my hesitation I had to turn West, cancel IFR and then fly a circle while descending to become fully VMC over the lower terrain in that area. It wasn’t a mistake, but something to improve from a tactical point of view.

Avoiding a downpour during landing

The city at the time of landing was getting some rain. The next picture was taken after the turn into the base leg to runway 34 at about 1600ft. The VFR approach chart for Freiburg shows a curved traffic pattern that follows a major road, a river and eventually a railroad. The base leg is supposed to be flown between the highrises in the picture and the city center. Following that traffic pattern would have taken me to the edge of the rain. As wherever there is rain, there is turbulence, I didn’t want to go there at low altitude over a congested area. So I cut it short a bit and lost the remaining altitude on final.

The smooth landing was on a dry runway. 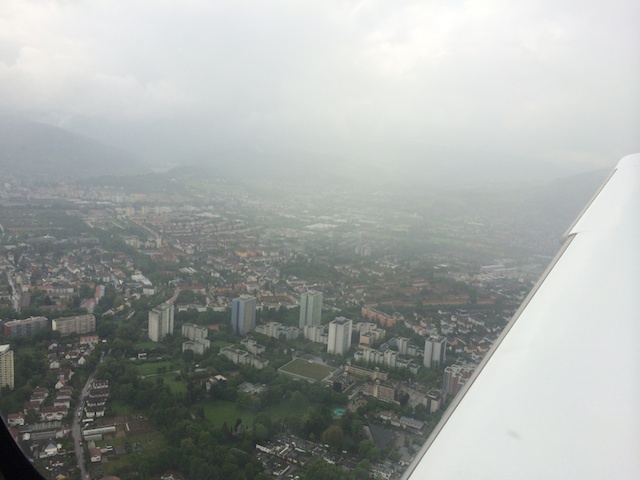 Filing for the flight back to EDFC

For the flight back I filed another Zulu IFR flight plan for 17:10 UTC (19:10 local time). The destination airfield Aschaffenburg closes at sunset, which on that day was at 20:40 local time. The flight was supposed to take about one hour. An an alternate airport I filed Mannheim (EDFM), which also has an instrument procedure.

The FISO service at Freiburg was provided by two young guys who provided me with the initial frequency to call Strasbourg and also the transponder code.

However, upon calling Strasbourg after becoming airborne there was a surprise.

The French controller responded with:

instead of the usual confirmation of RADAR contact. To my

N747TG is on an IFR flight plan to EDFC. Next waypoint is HERBI

All the while I was staying over the lower terrain, climbing a bit and did not turn towards HERBI to avoid the hills between me and HERBI. It would have been fine to climb more agressively and turn inbound HERBI earlier, which eventually I did. 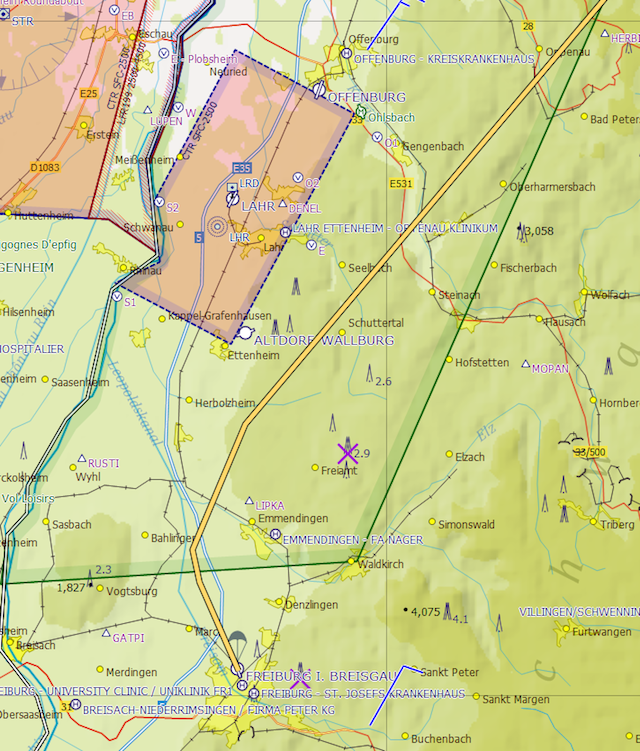 Strasbourg than came back to me:

N747TG proceed direct ETASA according to Langen. Squak xxxx. What is your desired cruising altitude?

I had filed for FL60 and requested FL60 from Strasbourg. But he came back with:

That was fine also. I was in the clouds and the outside air temperature on one probe was showing 0 degrees Celsius while on the other probe it was 1 degree Celsius.

The transponder code the FISO at Freiburg provided me with was 6120. Strasbourg gave me a different one, something like 12xx. I assume the flight plan never made it on time from the German DFS computer to the French counterpart and so the controllers from Strasbourg simply created a new flight plan on the fly.

While passing Mannheim I was able to spot the city to my left down below between the clouds. 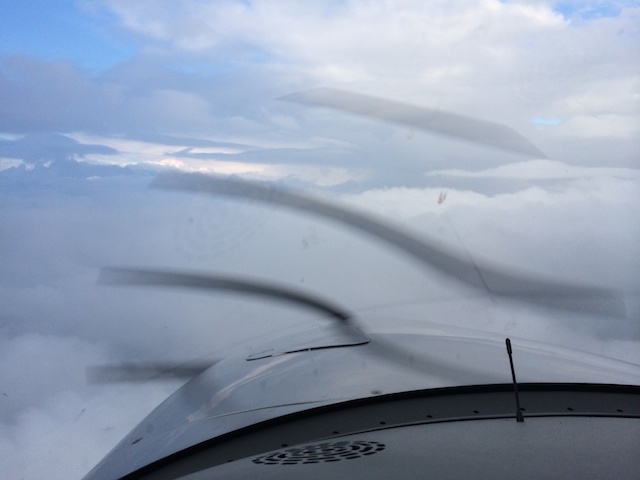 A few seconds later I was in IMC again. 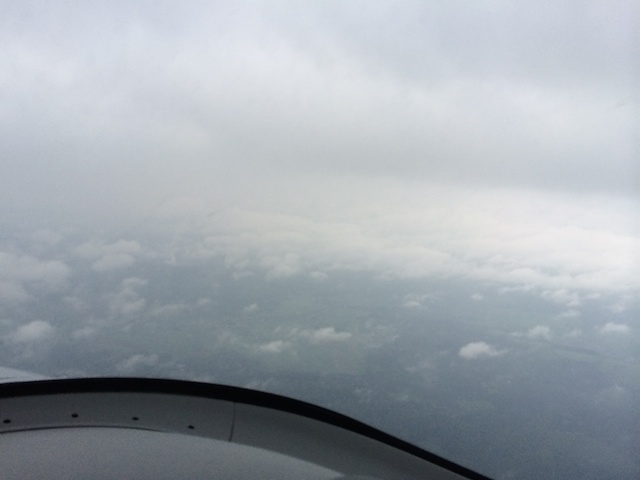 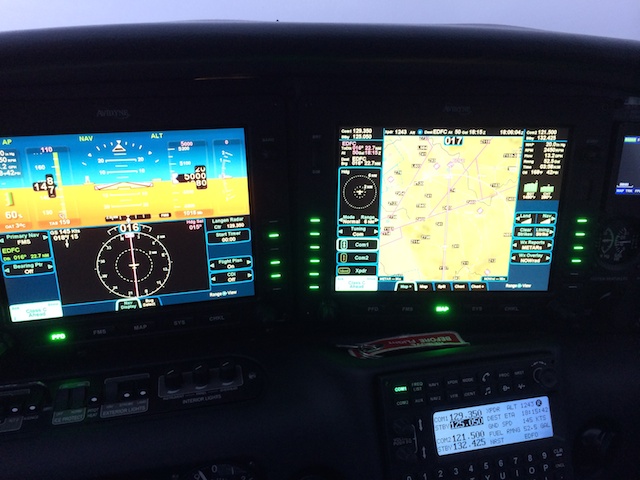 I was guided down to 3,500ft and from that point on had a wonderful view towards the airfield in front of me:

NTG has the field in sight. Canceling IFR

To which the controller responded:

I overflew the airfield to join the right downwind runway 26 and came in for the landing.

From the ground the sky looked just wonderful. That’s were I just came from. :-) 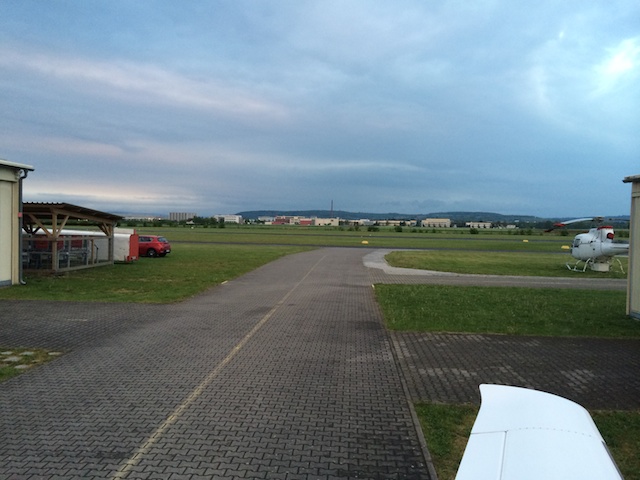