Everything today was working well. No stress or trouble of any kind. Eventually I was riding a taxi to the airport of Kassel-Calden. While I was being taken to the airport I filed IFR for 19:50 local time for the flight back to Aschaffenburg (EDFC):

The clouds were pretty much the same as the day before and as FL90 had been working well, I picked that altitude again.

Delay getting and paying for fuel

I arrived, paid my overnight and landing fees, checked the aircraft and taxied across the apron to the fuel station to get 60l of additional fuel just to be on the safe side.

N747TG is a rented aircraft. The rental price includes fuel and the owner uses a fuel carnet to let pilots buy fuel at his expense. For some reason the payment terminal at the self-service fuel station was not accepting the card and the attendent appeared to help me. He tried a few times to make the card being accepted and then opened the pump manually for me to fill up the wing tanks of the airplane. We then had to drive across the apron to the terminal to pay for the fuel. He took me back and eventually I was on my way.

NTG is ready to copy

As I didn’t repeat the part about the clearance limit it got repeated and after rereading it to Kassel Ground I got:

On my flights within Germany so far I’ve been given clearances when in the air from ATC due to the fact that I always had departed from and to VFR only airfields. This time I was at a towered (controlled) IFR airport. They never said “cleared to Aschaffenburg”. Aschaffenburg is a VFR only airfield and by the book one cannot be cleared to it. The controller in Kassel added “clearance limit TEKTU” to kind of correct the earlier part “cleared to Aschaffenburg” and then on my readback insisted on me reading back that important part. Always some little variation :-)

I made a few changes to the flight plan in the FMS and reported:

NTG taxi via E4, L and B to runway holding point B runway 27

At 20:26 local time I got a FLS (FLight Suspension) via SMS on my cell phone that was followed by a DES (De-Suspension) the same minute. At that time I was on taxiway L on my way to runway 27. The phone was already off and I received those messages after landing in Aschaffenburg.

By now I know why there was a slight delay at the runway holding point. My flight plan had expired and ATC recreated it while I was on the taxiway. The controller than came back to me with:

I repeated and taxied out onto the runway. Taxiway B allows to accelerate without the need to turn into runway direction so I was able to add power in one sweep of the power level and seconds later I rotated and was in the air.

By now it was 20:28 local time with sunset and thus the end of the operating hours in Aschaffenburg approaching.

Climbing to a very short and very direct flight

The autopilot was set to IAS and NAV and while I was leaning the mixture with increasing altitude the airplane basically flew itself up to FL90 after following the EMBA2N departure route. 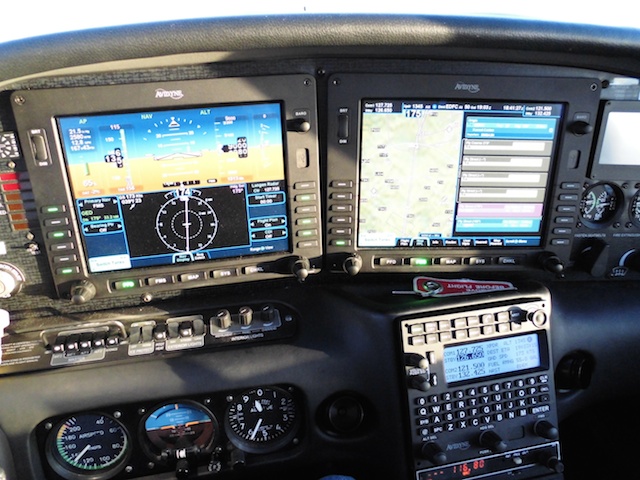 At FL90 the outside air temperature was -2C and I had a nice tailwind component providing me a groundspeed of 173kt. The view was quite nice. 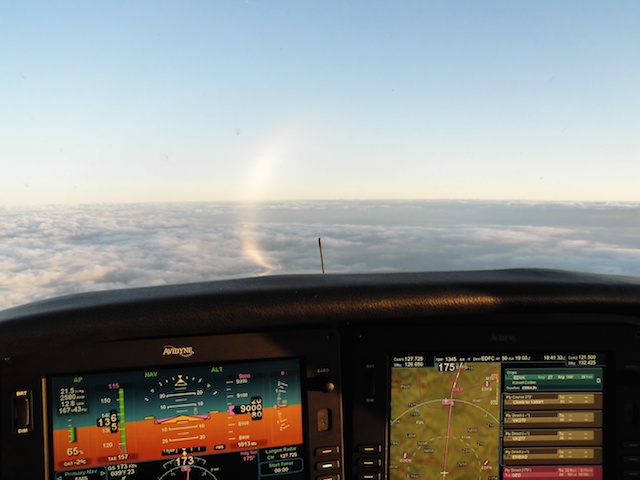 Bremen RADAR came back to me with something great: 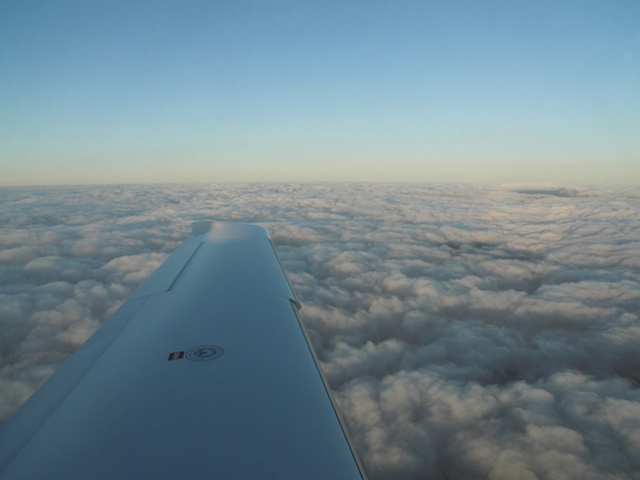 While I was listening to Air China, Lufthansa, Air Berlin I was enjoying the view. There were actually two cloud layers that were clearly visible through some larger areas without clouds. I thought it was a good idea to be above all of it at FL90.

Although N747TG has a normally aspirated engine it does climb pretty fast. Even at FL90 I had almost 1,000ft per minute climb rate. 310 HP do something good :-)

The other good thing is that by hearing all the professional airline pilots talk I am getting more and more relaxed. Hey! They do the same little mistakes as I do!

For example, there was a Swedish sounding airline callsign. The pilot was given a new frequency, apparently misunderstood and then came back to Langen RADAR saying “no luck on 123.425”. So he was given the right frequency again, thanked the controlled and disappeared. If it happens to them, someone flying single pilot IFR should not be ashamed or feel too shy about it. 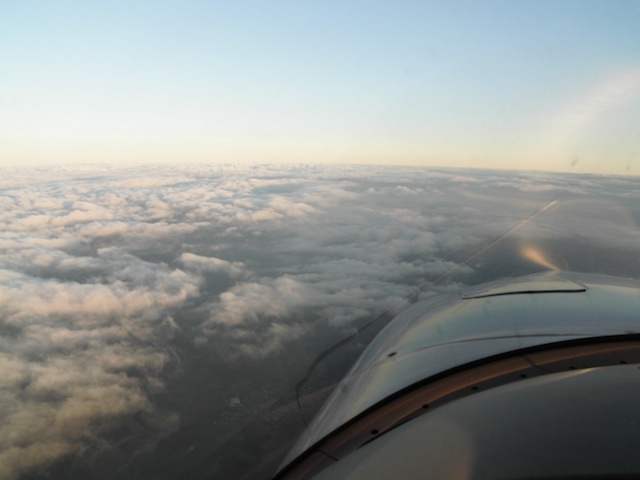 As I was approaching the Gedern VOR, I confirmed with Langen RADAR:

and switched the autopilot from NAV mode to HDG mode. Shortly thereafter I was instructed to descent and eventually he asked me to expide my descent. I was descent at 500ft/minute and then increased to 950ft/minute. During the descent I was also picking up speed, which was good given that I was quite late.

Touch down was right on sunset and thus the end of the operating hours of this airfield. Upon calling up the FISO I got in German:

That means that had I not called the airfield would have been officially closed and I would have had to divert to my alternate Mannheim (EDFM) for a train and expensive taxi ride back home. 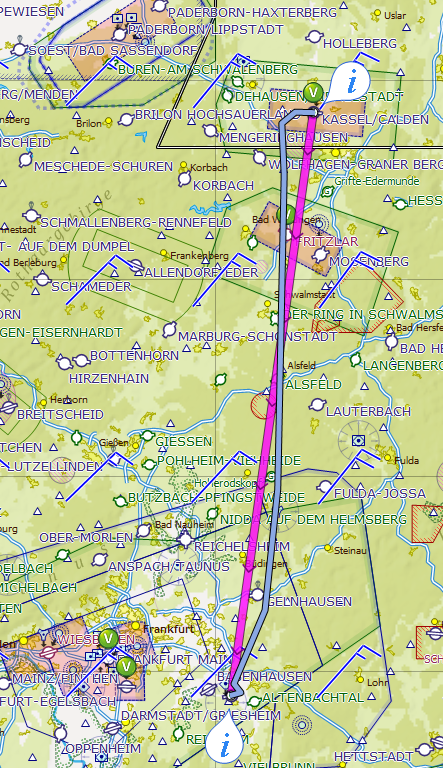 The total flight time was 34 minutes. Not bad given that the same distance by car would have been 2:30 hours.

Unfortunately, many times ground transport from the airport to the final destination adds significantly to the total travel time.