Flight into the night (EDAZ - EDVK)

This time my destination was an IFR airport: EDVK. IFR airport means that there is an instrument approach procedure and the flight can be performed all the way to landing under IFR. That is unlike the other times where I had to cancel IFR somewhere in the vicinity of the destination airfield as soon as practical and while being in visual meterological condititions (VMC).

The other advantage of EDVK (Kassel) is that its operating hours do not depend on sunrise and sunset. For this evenings flight that was very helpful. Kassel is open until 22:00 local time. I was able to avoid the evening rush hour in Berlin, which allowed me to have dinner before heading out the airfield of Schönhagen. My flight plan was scheduled for 20:00 local time.

Somehow things always take a bit longer than expected. Engine start was at 1821Z while by 1800Z I was supposed to have taken off. I need to get a bit better at my scheduling or simply resort to filing as soon as I’m on the airport.

I had filed a few days in advance after reading that one is supposed to file at least 60 minutes in advance. To get a better picture about the actual rules in Europe reagarding filing an IFR flight plan I started a discussion on EuroGA and learned that, similar to the U.S., you can file a few minutes before the flight and it usually works. So from now on I will either file on my way to the airport, when riding in a taxi, or as soon as I have parked the car. That should still provide some lead time for the plan to work through any systems involved and avoid to take off way after the scheduled take off time.

Sunset on the day of the flight was at about 20:50 local time. The following picture was taken just a few minutes before that some 15 minutes after takeoff. I was flying at FL70. 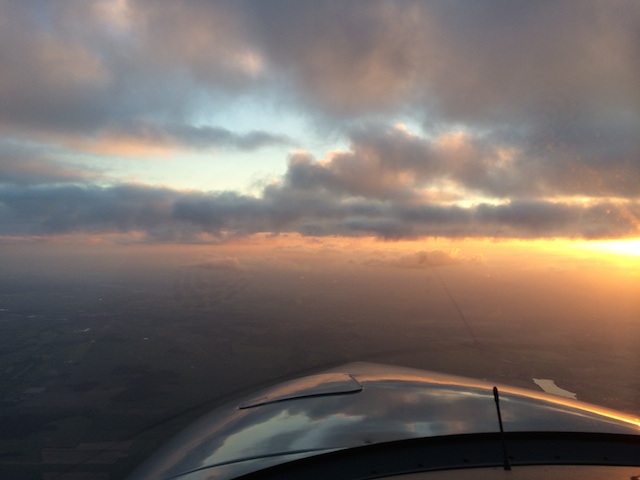 As I was right underneath the clouds and the clouds ahead looked like coming down to my altitude, I called in to ATC:

To which I immediately got:

The view from about the clouds was much nicer. In the distance straight ahead you can a cloud standing out a little bit above the others. 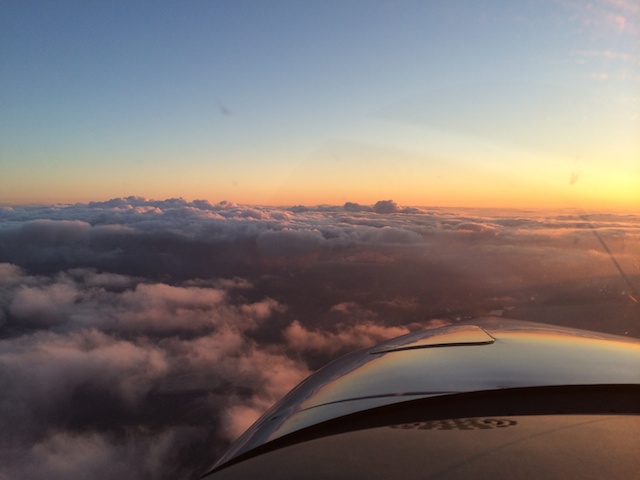 As soon as I was near that cloud Bremen RADAR was asking:

NTG advise when ready to descent

To which I responded:

Ready to descent in about 2 minutes NTG

I didn’t want to start my descent right into that little tower. The outside air temperature was negative 7 degrees Celsius and that cloud looked like an older towering cumulus. Those can contain icing conditions and there was no need to fly through it. At that time of the day the cloud was probably quite old and thus it may not contain icing anymore - but how I can for certain. 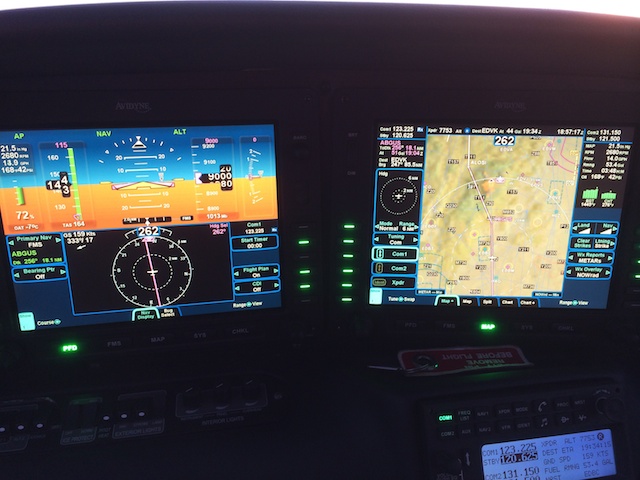 So I waited a bit to get past and then started my descent.

Bremen also changed my routing a bit to have me fly towards LUXUX, which is the initial approach fix (IAF) for the ILS 27 into EDVK.

Flying the ILS 27 into EDVK

For the approach I activated the GPS overlay for the ILS 27 procedure. That allowed me to have the autopilot fly the procedure in NAV/VNAV mode. I picked a power setting and the airplane flew along the horizontal and vertical path all on its own. My job was to supervise everything was working as supposed to.

It did work very well until it was time to intercept the localizer and capture the glideslope.

The Avidyne R9 system was supposed to switch from FMS (GPS) to regular radio navigation on its own. When loading the procedure all the frequencies had been set automatically. The localizer and DME frequencies were identified. Unfortunately, it never switched and never turned into the localizer. Instead it flew over the last waypoint before the final approach fix (FAF) and continued straight ahead. The approach mode (APPR) on the autopilot had come on by itself. As soon as I noticed it wasn’t switching nor turning, I did switch manually the navigation source from FMS to the localizer and immediately the autopilot turned the airplane around to establish itself.

At the same time the approach controller from Bremen was calling in and she wanted to know whether I was turning:

NTG are you turning onto the final approach course?

To which I replied:

The autopilot was turning right and shortly after that left to become established. At that point it was also capturing the glidepath.

NTG is established on the localizer for ILS 27

While comencing the procedure I was flying through a few clouds and the view to the airport was slightly obstructed. As soon as I was established on the localizer and following down the glidepath I had a beautiful view towards the airport and the approach lights. The weather was really nice and the air smooth.

That was a good opportunity to get some experience alone with the R9 flying an ILS. During an earlier introductory flight with the owner of the aircraft we were in IMC and got delay vectors and everything had to happen in an unusual order. We switched the modes manually as ATC’s instructions required us to do so. So I never had the opportunity to see for myself what the system will do and how.

I remember him saying that the system will switch but very late. It might also be that the angle between the final approach course and the inbound track from the IAF was too big, which is quite funny as that is how the procedure is designed.

What I learned now is that as soon as I get close the localizer I better switch the navigation source from FMS (GPS) to radios manually unless I’m flying an RNAV (GPS) approach where there are no convential radio navigation aids. I soon will have another opportunity to fly the ILS 27 at Kassel.

The last few minutes of the flight were officially at night. In the picture you can see the tower and the general aviation apron from taxiway L. 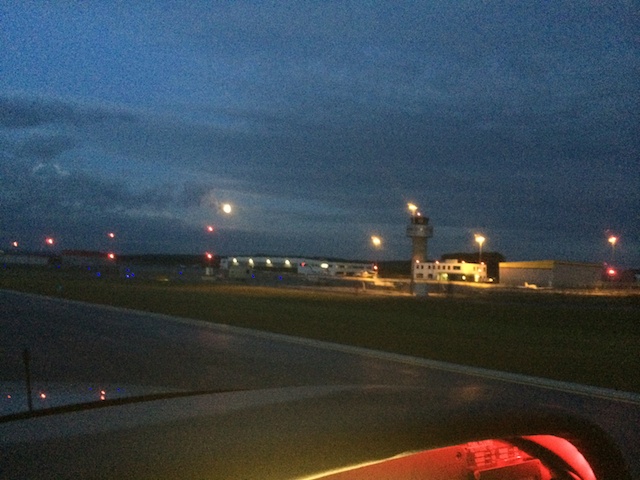 N747TG was then parked for the night in front of the GA terminal. 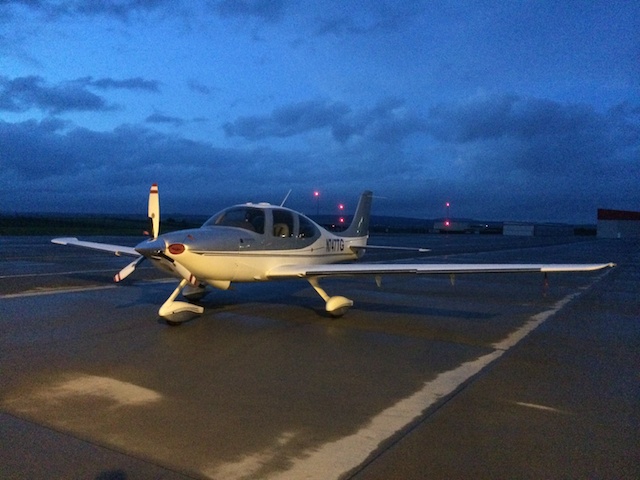 Total flight time from Berlin-Schönhagen to Kassel was 1:06 hours. Taken everything into account my total travel time from leaving the dinner table in Berlin to the GAT at Kassel was about 2:30 hours. That’s an important figure for me, as there will be some future developments where this will matter :-)