After I had given a talk about ATDD at my client’s internal developers conference at their offices in Beijing I was invited to participate in a business dinner. I was not really well prepared for the experience. It was quite special.

The dinner turned out to be some sort of celebration. A department leader invited everybody who had participated in some project to celebrate the success and give thanks to the whole group.

The restaurant had two floors. On the lower floor it looked like a regular restaurant with tables of different size seating couples, groups of four or six people and there were some larger round tables. On the upper floor there were rooms with big round tables in them. Some of the rooms had a sliding door to open it to the adjacent room. We were in such a double room.

People arrived in batches, stood around and talked to each other. As I don’t understand any Chinese, I can only guess from the sound and their facial expressions that they were quite happy and congratulating each other.

When people decided to sit down they carefully kept two seats empty. Those two seats were facing the door and had the wall in the back. I learned from earlier reading that in a formal setting seats facing the door are reserved for important persons. Further I was explained that people were waiting for their boss to arrive and nobody was to touch the food that started to arrive.

I expected people to act in a more formal way after the boss had arrived. But I was really wrong. Over the course of the dinner everybody was drinking heavily from the rice wine that was frequently brought into the rooms. The boss himself drank quite a lot and was raising his glass to praise everybody’s heroic acts that contributed to the success of the project. He was sitting to my left side and explained a few bits and pieces to me. Quite interesting to be that close and be allowed to observe and participate.

But the most impressive element of that dinner celebration was the food itself. 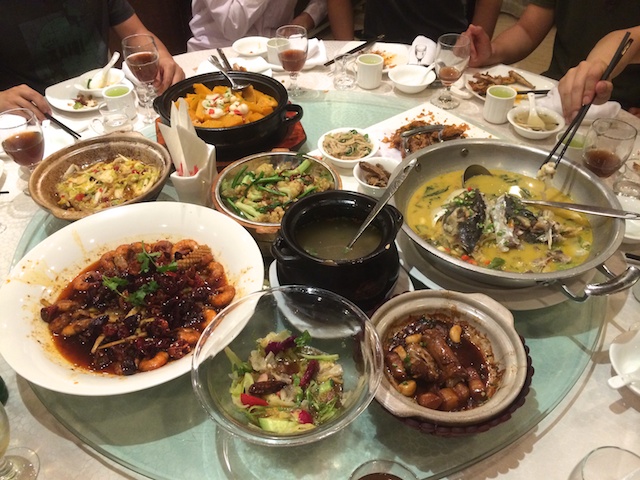 Food arrived in large quantities and it basically never stopped coming in.

First, there were cold dishes that were all placed on the rotating center of the table. One uses chop sticks to pick whatever one likes and either puts it straight into one’s mouth or first onto a small plate. There were salads, cold meat cut into thin slices, marinated eggs, some fish and many other things I didn’t know.

At some point the food that was brought in turned into dishes prepared hot. All kinds of meat and vegetables, some fish again. Some food was a little bit spicy but most was quite mild. And it was tasty.

Eventually everything took the turn to the sweet side. That didn’t mean that the other bowls and plates with the hot food had to disappear. Instead some things were taken out and brought back in on smaller plates so that people can continue to enjoy them.

In between waitresses served tea, plum juice and, of course, more rice wine.