A few days ago I set out to visit a business friend in Barcelona. A direct routing from Kassel (EDVK) to Sabadell (LELL), the general aviation airport for Barcelona, would have resulted in a very long flight of more than 4 hours. That seemed to be a little bit too much. So the plan was to first go to Avignon, spend the night there and then complete the trip to Barcelona the next morning.

This is how the planned and actual routing of the first leg looked like. The magenta line is the planned route and the black dotted line with triangles is what the Eurocontrol RADAR sites tracked. 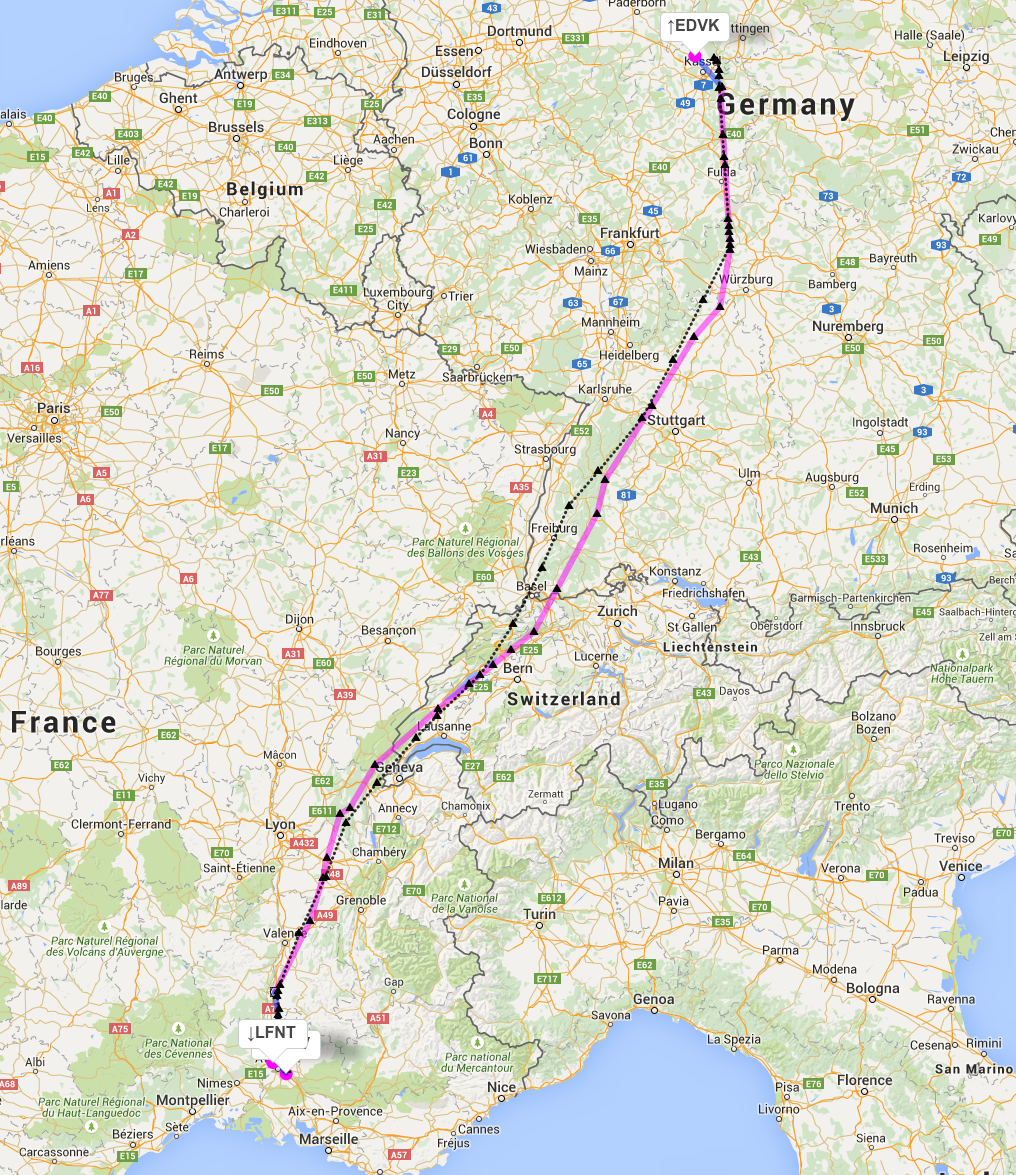 The flight was eventless at 12,000ft in blue skies. Flying in benign weather with this kind of aircraft is more or less like flying on a big airliner. There isn’t much to do. For most of the flight the pilot becomes almost a passenger. Once settled in cruise flight the autopilot follows the programmed route. The pilot “could” read, chat or have a coffee. However, there is constant radio chatter and frequent hand-overs from one air traffic controller to the next. So there is always something to do but most of it is monitoring or responding to a radio call. 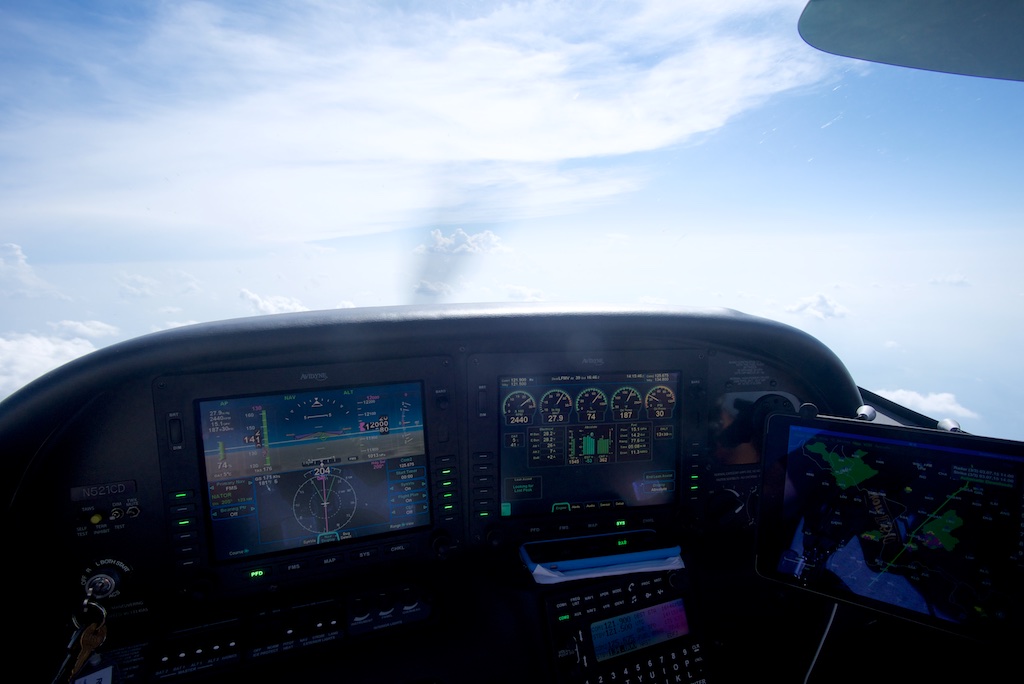 Although I just said the flight has been eventless, it wasn’t without something special. The look out of the window showed some cumulus clouds. 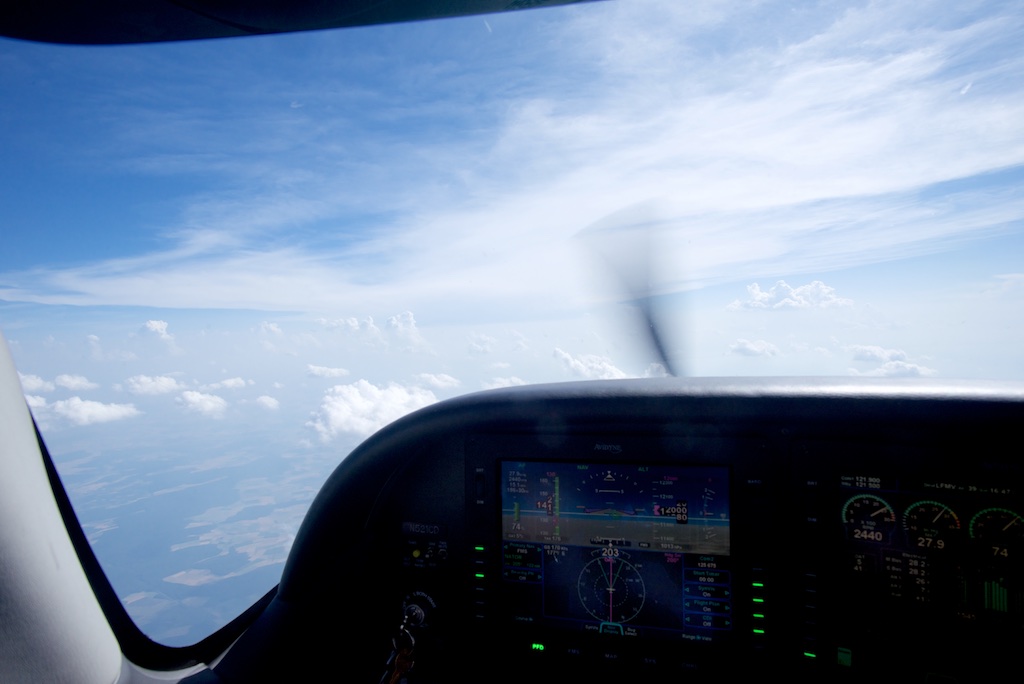 But further ahead over southern Germany the cumulus clouds became a little bigger. 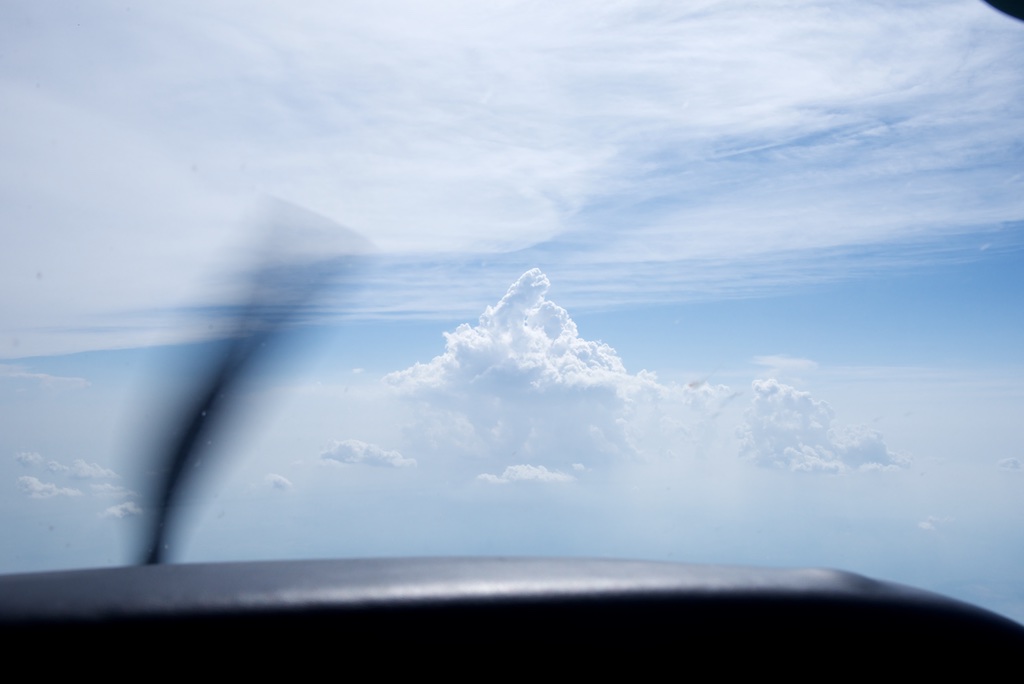 And then this showed up: 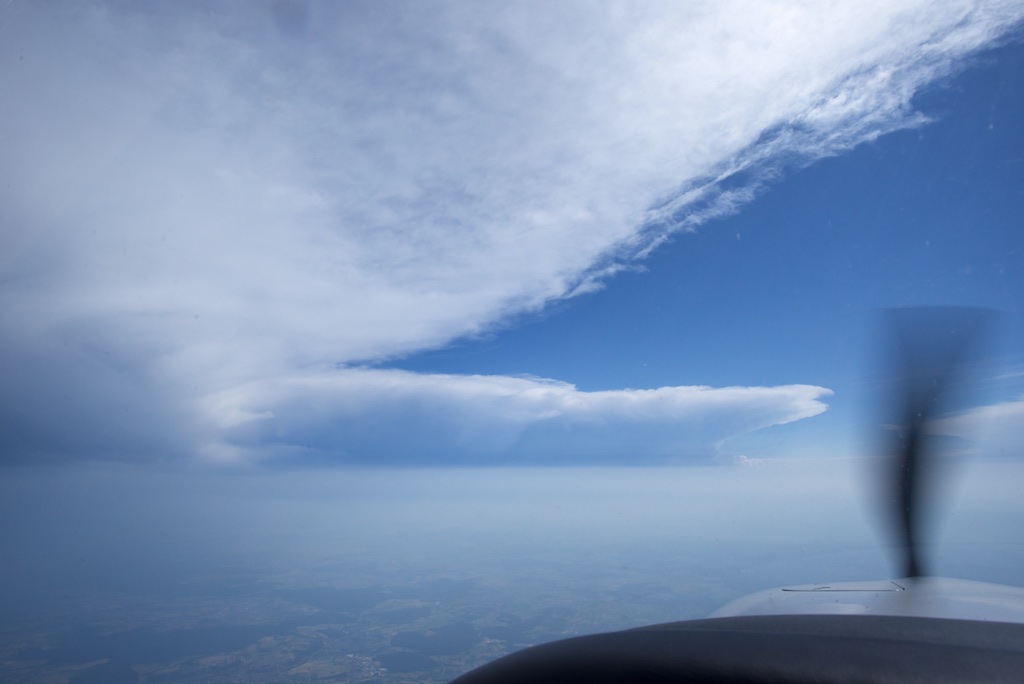 There were a few thunderstorms around that arose high above the hazy layer. They do look quite interesting. Something like a dangerous beauty. 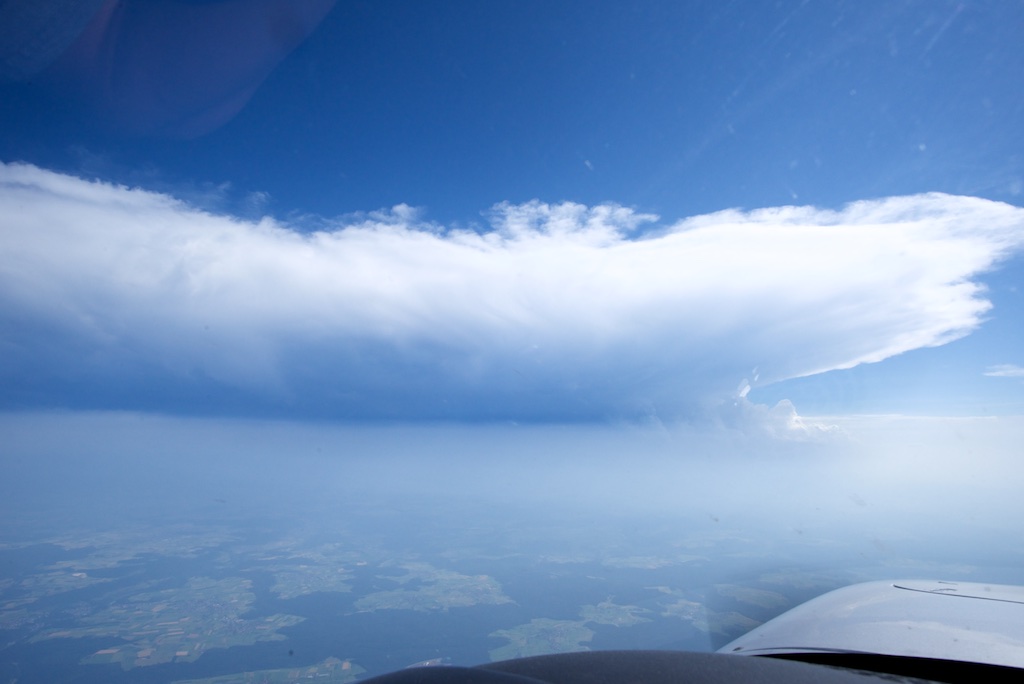 To the left there was a big storm cell and further ahead to the right there was another one. Not as impressive looking from the distance as the one closer by but still very much real. 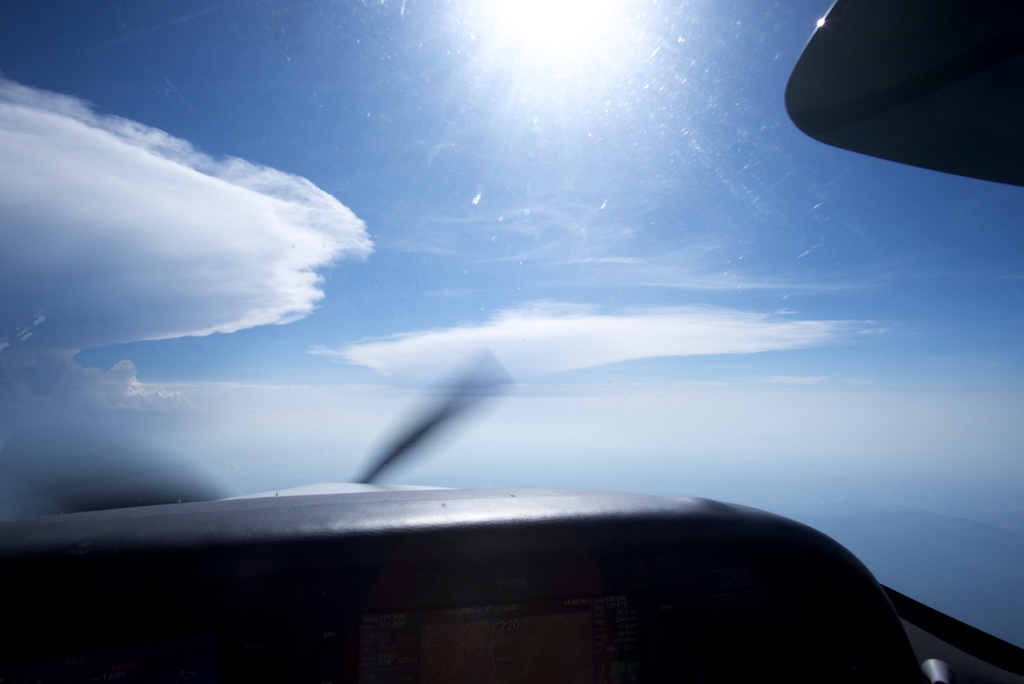 On the satellite weather image (see the iPad screen) you can see the flight path (green line) and the lighting from the thunderstorms as a magenta area.

ATC did know about Scylla and Charybdis. Other aircraft were on avoidance vectors in this area as well. 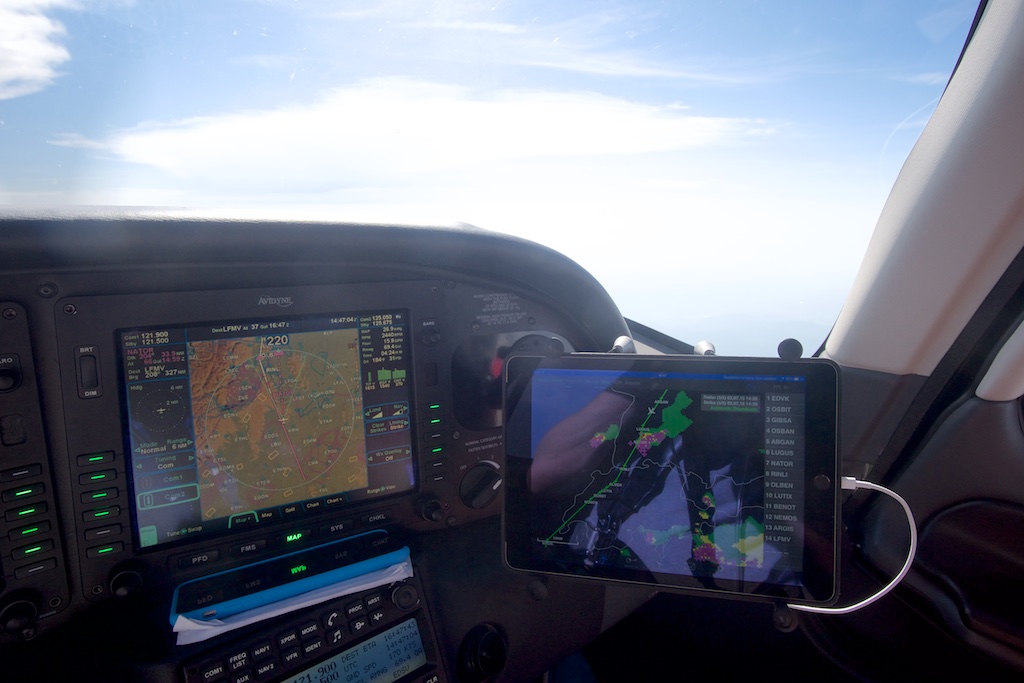 Keeping a respectful distance to the storm on the left I navigated in smooth air between the two towards the next waypoint in Switzerland. 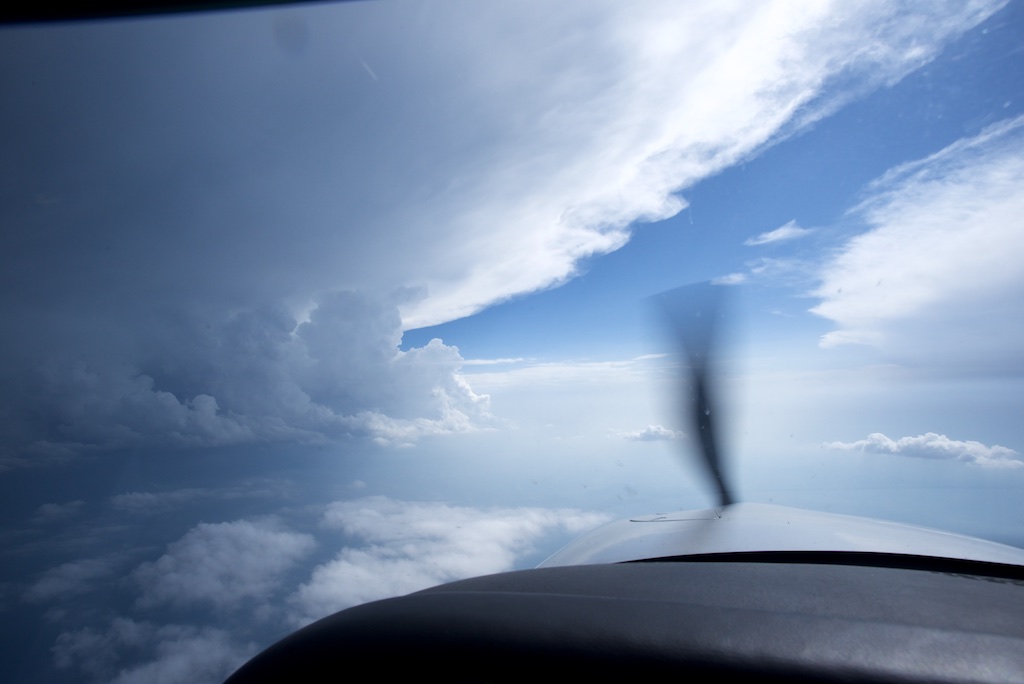 It was a bit a strange feeling to have parts of the storm overhead. 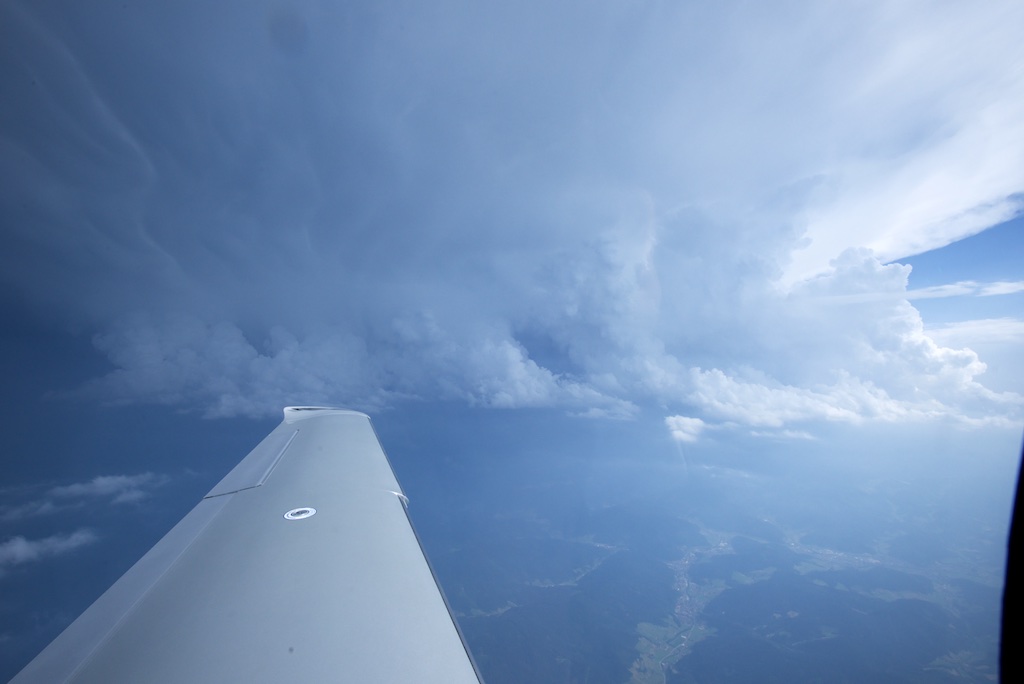 A few minutes later I was past it and in contact with Swiss ATC. 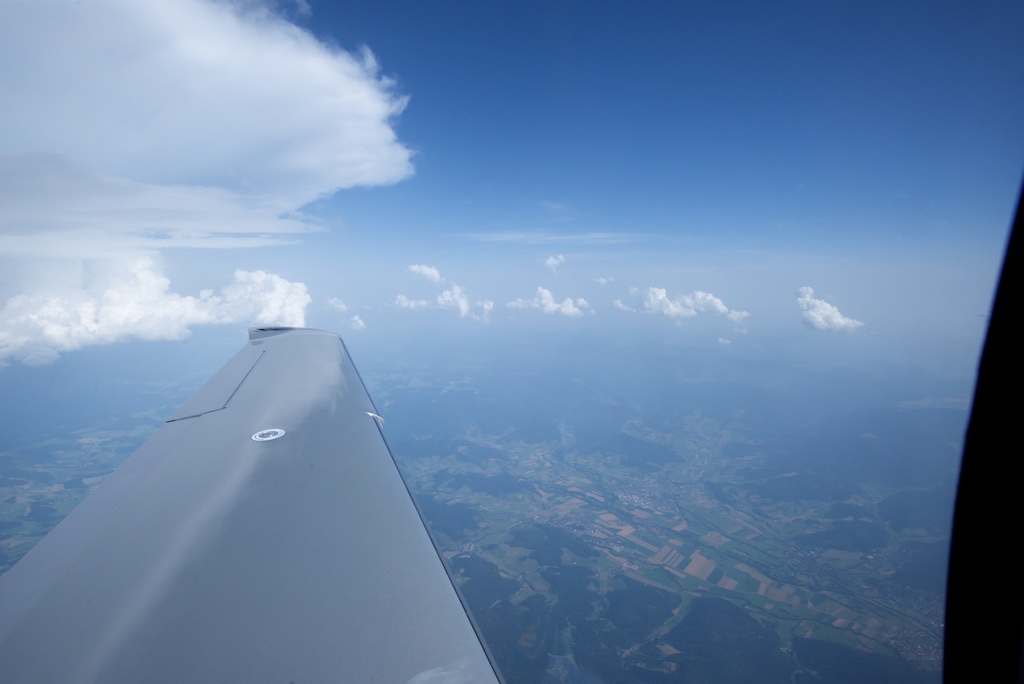 Here is the city of Basel: 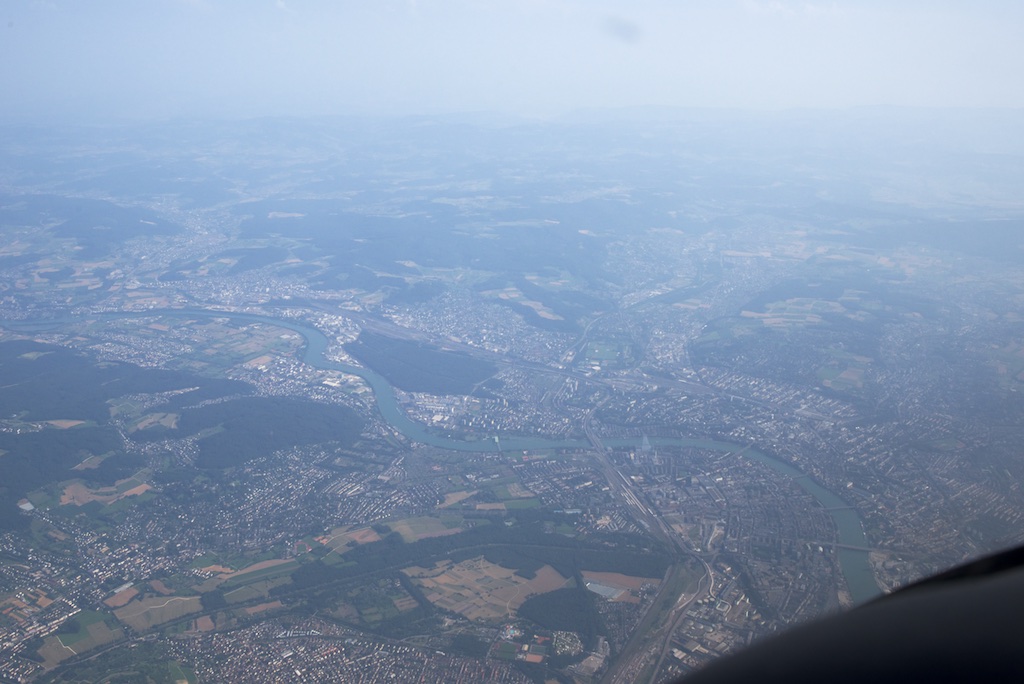 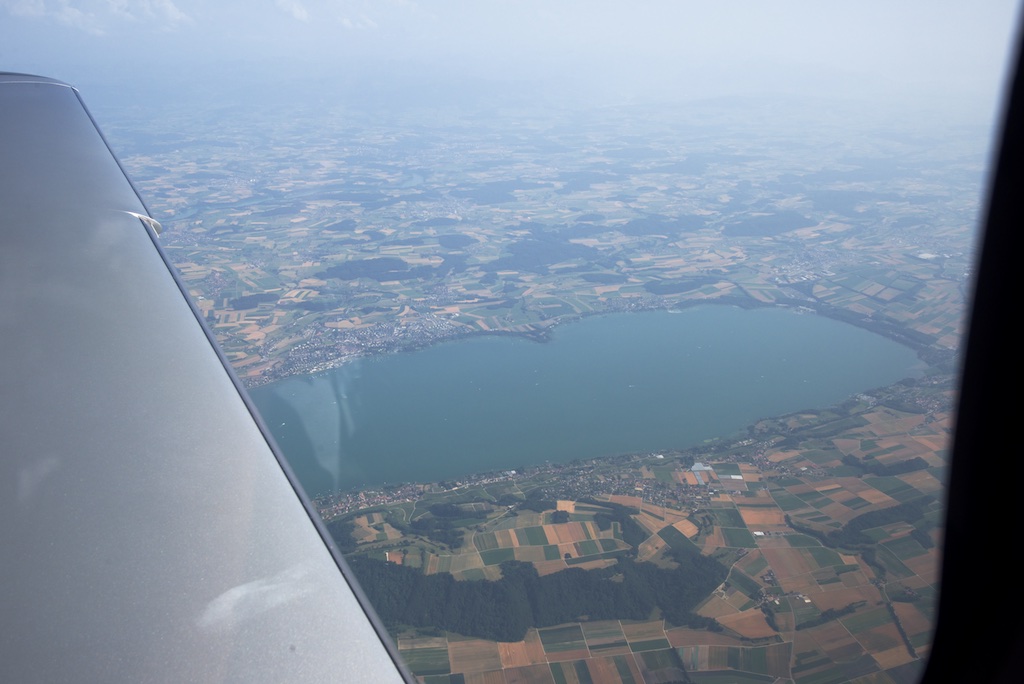 We were then passing along Lake Geneva and the Geneva airport. 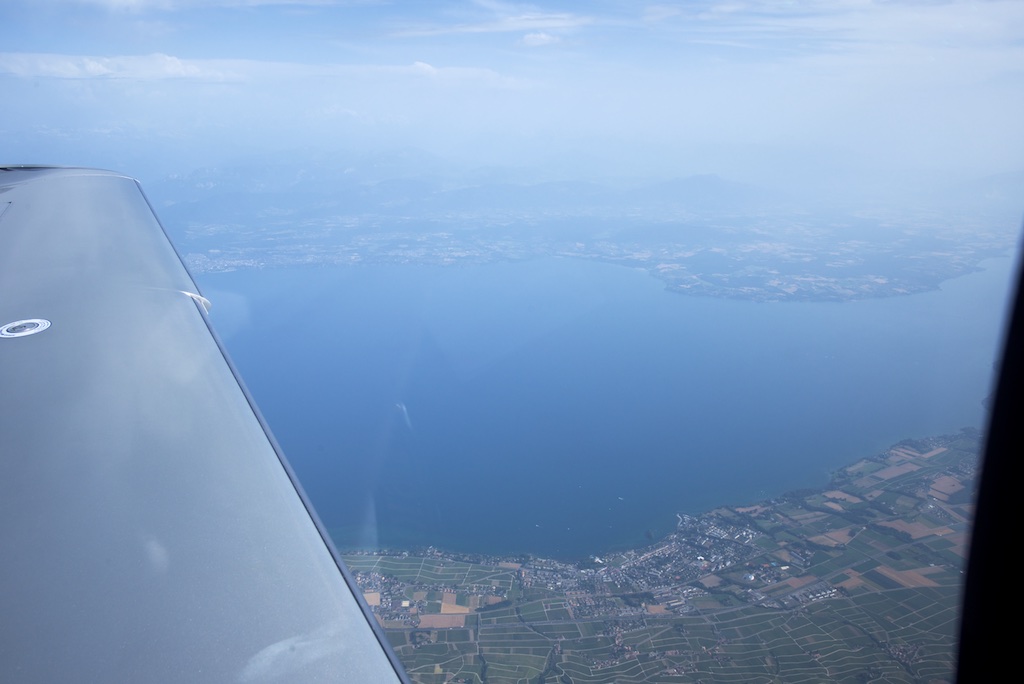 After a very good dinner at an outside wine bar we had breakfast and with time to spare arrived back at the Avignon airport.

I had filed IFR for 0830 (10:30 local). Then the first slot allocation message arrived assigning us a departure slot of 0849Z. It got updated with a slot for 0859Z an hour later. Very close to the off-block time the slot got moved ahead to 0853Z.

That in itself would not have been any problem at all. It would have meant to wait a little bit and depart slightly later.

However, I had to wait in the operations office for a while to pay my landing and parking fee. When I arrived there was another pilot doing the same and the ops lady explained that she has to attend the passengers of a commercial flight that was getting ready and when she comes back I can pay my fees. I mentioned the slot but that’s how it had to be.

In the end the departure was a bit rushed. On first contact Avignon Tower advised of the slot time of 0853 and that the window were 5 minutes wide. In the end off-block was 0851 and actual take-off 0904.

The picture shows some salt flats close to Arles. 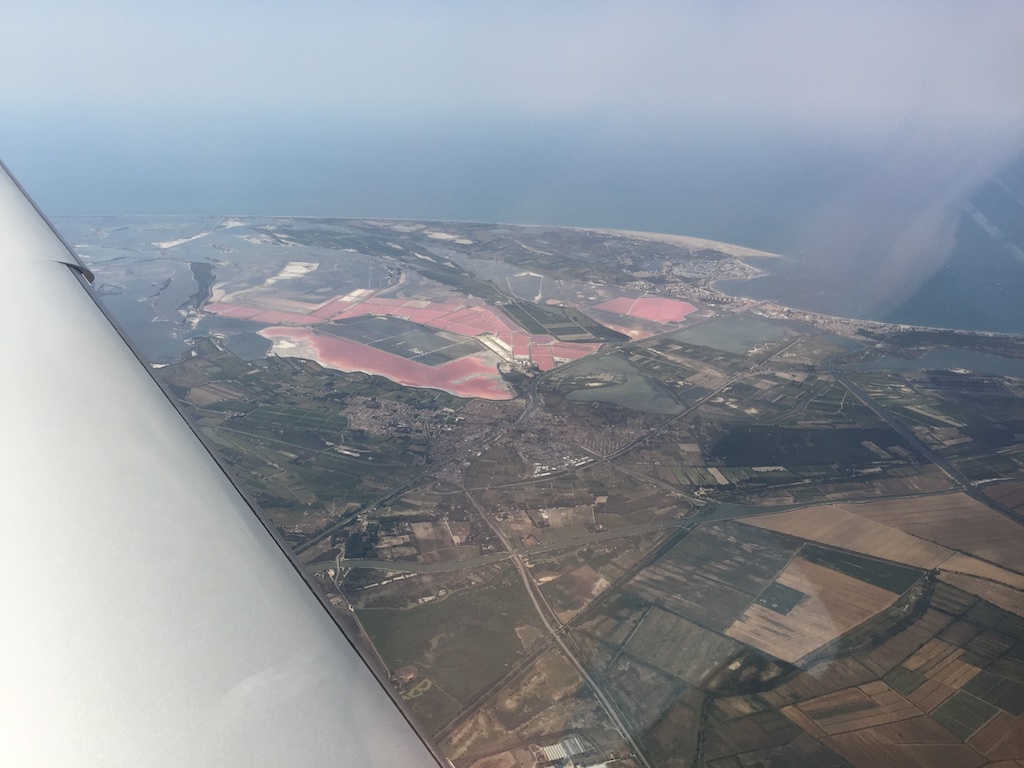 Departure was along the SID MAZET4Y but ATC cut it short. The flight path went over the water but always within easy gliding distance from 12,000ft. Shortly after Perpignan French ATC handed us over to Barcelona who sent us straight to the Girona VOR.

I began asking for a descent but only got down to 10,000ft. My expectation was to be guided down towards some minimum vectoring altitude at which I would cancel IFR and continue VFR for the landing at the VFR airfield of Sabadell.

But that is not how the Spanish do it. 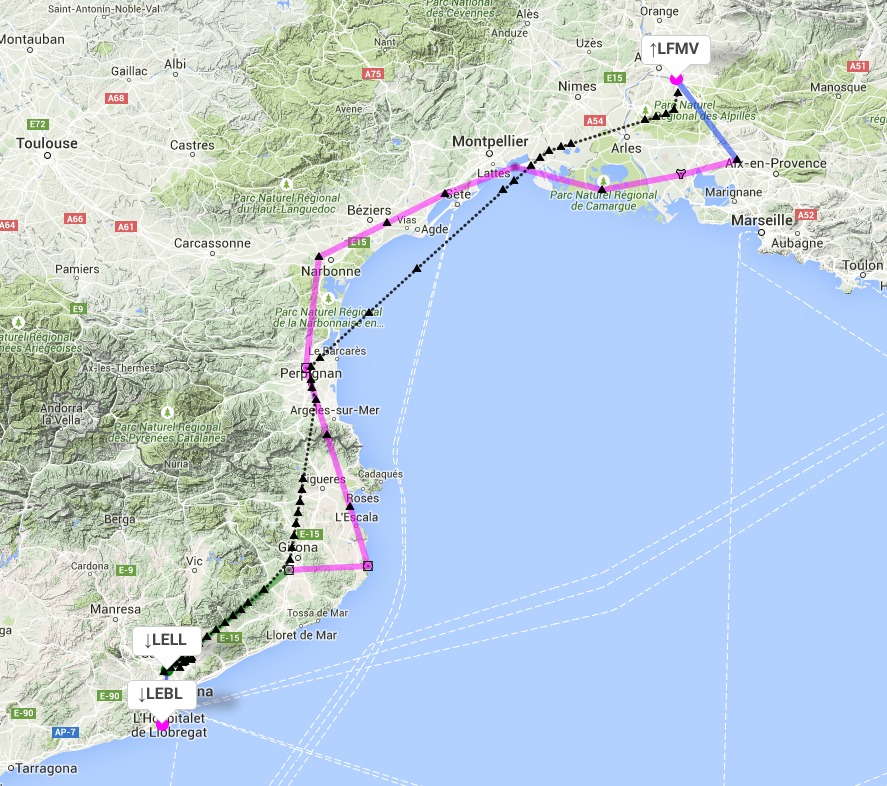 Instead I was sent into a holding at SLL, which is the Sabadell VOR. There I was thinking about what to do next. The weather was CAVOK and I as saw the airfield, I reported “field in sight”. ATC responded with a hint to cancel IFR. So I canceled and got back the Tower frequency for Sabadell.

To Sabadell Tower I explained that I’m overhead and will continue to the E reporting point. Apparently they have a RADAR screen and gave a few more instructions about my own position and other aircraft. After I was lower I was asked to perform one more orbit and eventually invited to the base runway 31. Others got a message that a fast Cirrus was approaching. I was flying at the usual 100kts. Most other aircraft at Sabadell are Cessna 150 or Diamond DA-20 Katana. 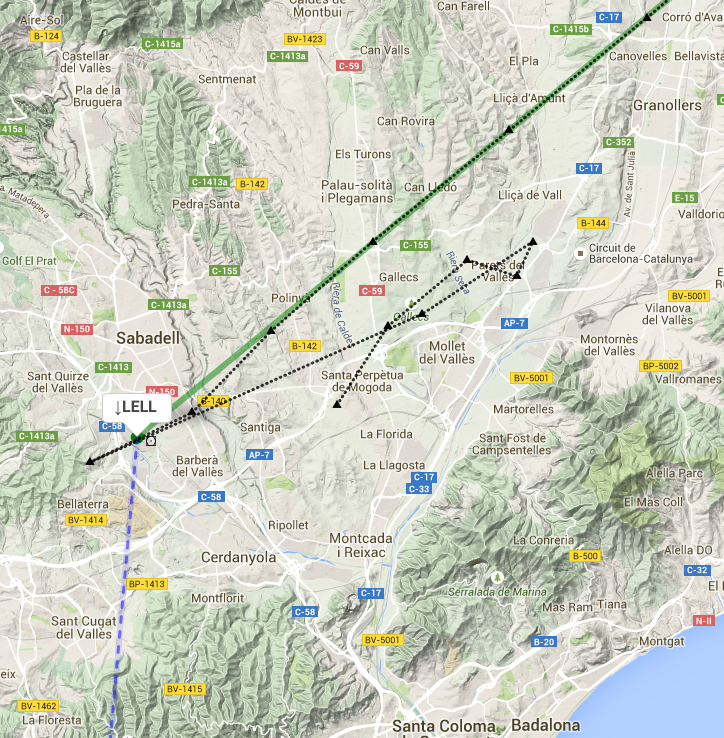 After landing we were given the choice of a nice parking spot. It was high time to open the door as the 38C heat was already getting in.