This morning I took off from Aschaffenburg for two days of work in Berlin. I reused the flight plan from before:

The first part of the flight has some nice view from flight level 70 (7000ft) and a few interesting cloud patterns high above. 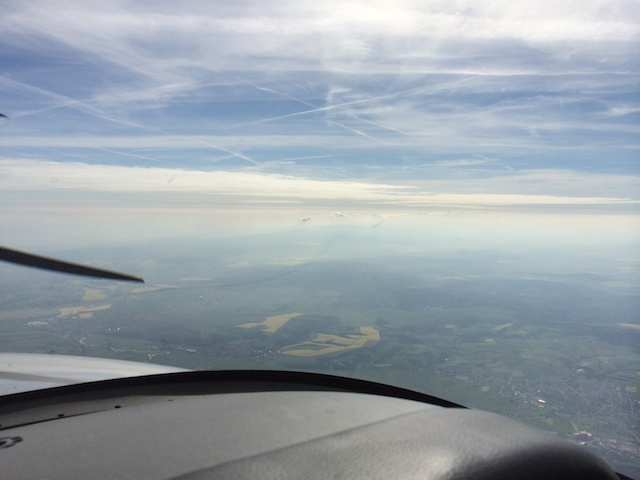 Aschaffenburg FISO had provided me the initial frequencey and the transponder code. Upon calling ATC I was given a different frequency. Upon calling in I was directed:

and within a minute asked to change the frequency. The next controller then had me fly towards FULNO and climb up to my final altitude of FL70.

FULNO, as well as SWALM, is an entry point to the airway N858 before ERSET, which has been part of my flight plan. I never saw FULNO and neither ERSET, as ATC instructed me to go direct to ERSIL instead. ERSIL is also on N858 - just a bit further to the East. As during my first flight to Schönhagen ATC then had me fly:

As the earlier waypoints had been direct-to ones, I deleted them from the flight plan on the FMS and the resulting flight plan had just two entries. 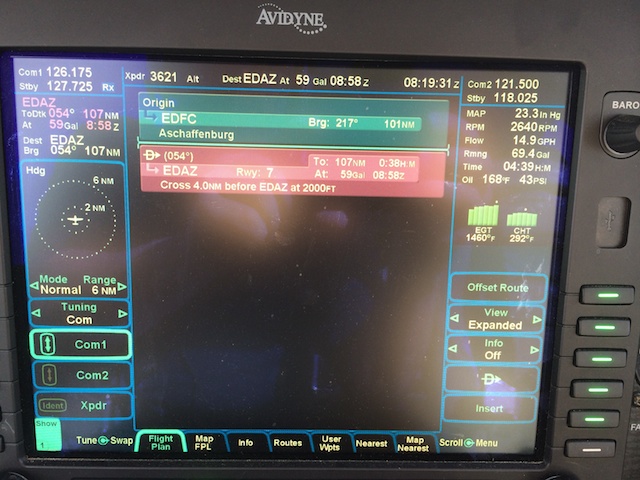 I was looking forward to enjoying the next 100 NM of smooth sailing when suddently a warning message appeared.

First, it was a GPS failure. The systems works with two GPS receivers.

Then, it was a dual GPS failure. Hmmm… 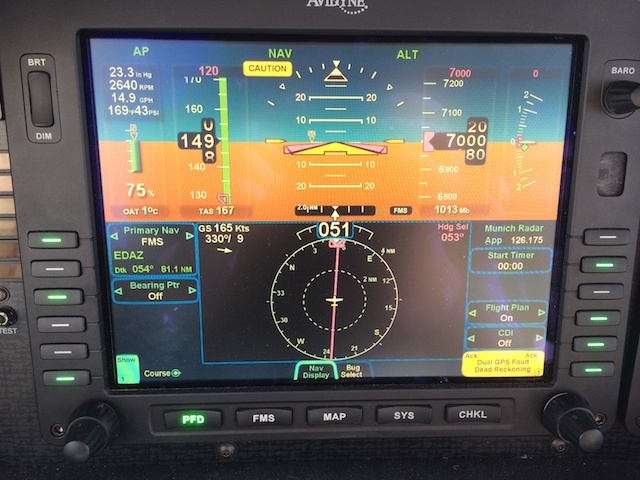 I was in VMC and there were no significant clouds anywhere nearby, so that event didn’t really create any trouble. On the iPad I’m running a VFR moving map and I can switch it into IFR mode to see the IFR enroute chart. Looking at the iPad it became clear that this had to be a failure of the onboard system and not a general problem with the GPS reception in the area. 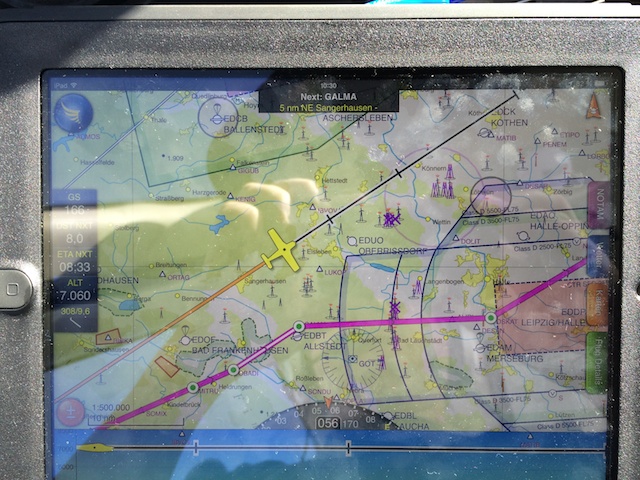 The system page on the Avidyne R9 lists a few more issues. 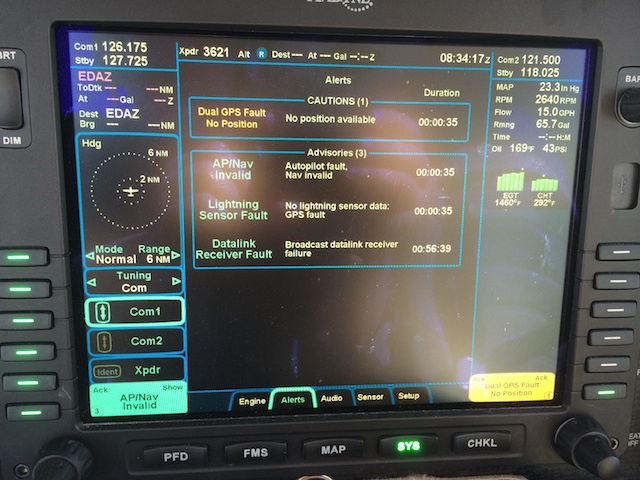 As I thought it were a good idea, I tuned in the BER VOR and the LEG VOR to have a constant crossfix while flying on HDG mode on the autopilot. The iPad moving map provided me the distance to my destination. No worries at this point in VMC :-) 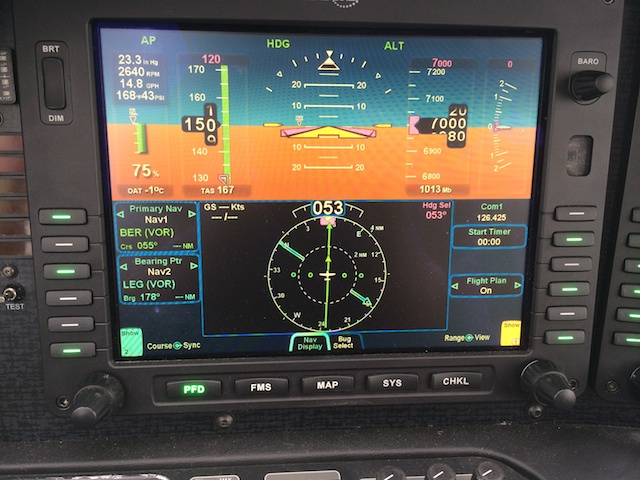 A bit later I was guided through a few clouds to descend below the class C airspace around Berlin for my VFR landing at Schönhagen. 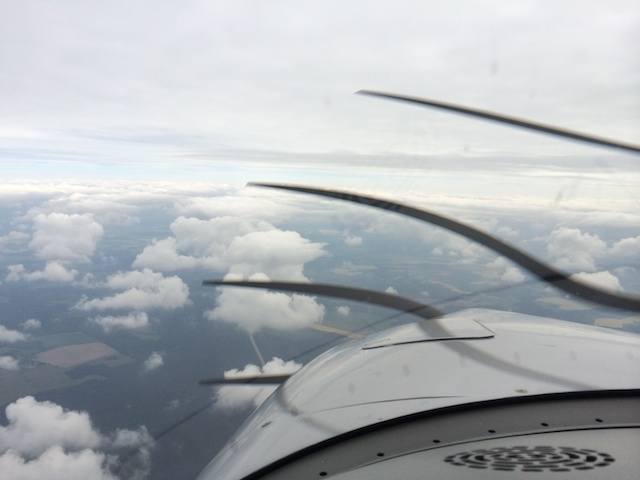 As I called Schönhagen I learned that someone was going around the pattern. I spotted the other airplane and called

when turning into the downwind leg of the pattern to runway 25.

Go around due to traffic not in sight

Unfortunately I lost sight of it when I was about to turn base leg. Not knowing where the other aircraft went, I added power and turned away from the airport for another attempt. It probably had landed and I wasn’t able to see it from my position due to the trees along the runway. As soon as I was coming back I saw it on TCAS. So it had landed and taken off again for another run around the pattern. I then went a bit further out to join the downwind behind it and landed.

The other pilot did some call-outs. He called out his position on mid-downwind and on base leg. I can’t recall a call for his final, which is why I was doubtful about his position. I guessed he was on final but as I couldn’t see him didn’t want to go there myself.

Next time I will actively query other pilots about their position when I don’t see their aircraft anymore, as is being done on the Unicom frequencies in the U.S. It doesn’t hurt to talk to eachother. One need to realize that the FISO on the ground is not actually looking at the traffic around the airport. There is no RADAR neither someone searching the sky with a binocular. Unfortunately, German pilots are quite accustomed to rely on the FISO for instructions, which the FISO cannot really provide, as he is not allowed to.

45 minutes by car into the city

After landing I received the keys to the rental car I had ordered earlier for my drive into Berlin. On the way into town one passed Berlin-Tempelhof and the former city airport that is now a recreational area. Each time I pass by I shed a little tear. How easier it was to arrive by plane right in the center of the city and then take the subway for a few minutes to the final destination…