This is another account of an IFR flight from Berlin-Schönhagen (EDAZ) to Aschaffenburg (EDFC). The flight took 1:35 hours from takeoff to touchdown.

I continue to document these experiences in order to learn from it. One thing is to learn in the IFR training environment where ATC is mostly simulated by the flight instructor in the right seat. Another thing is to experience it for real while doing longer cross-country flights alone. I consider the latter the real learning opportunity and the more I observe and mentally process, the better my foundation for the future use of the tool “light aircraft for business travel” is going to be.

My IFR flight plan was for 1645Z, which translates to 18:45 local time. My actual off-block time was 18:56 local time, as I had, again, a hard time getting out of the Berlin city traffic and on the road to Schönhagen. I left the office of my client at 17:00, was driving by about 17:15, which means that in the afternoon it takes basically the same amount of time to get from the center of Berlin to Schönhagen as does the flight from Schönhagen to Aschaffenburg.

Here is the flight plan as filed:

By 19:08 local time I was airborne and after the initial climb out of Schönhagen I called ATC:

Knowing about the heavy precipitation over Magdeburg on that evening I added a request for a routing further south to avoid it. I was told to continue towards MAG, the Magdeburg VOR, and climb FL80. A few seconds later the controller informed me about the limit of my clearance according to my filed route: PEKIG.

What then followed was interesting.

From the tone of her voice I could tell the controller was a bit nervous or distracted. She was providing information in pieces, as she was probably trying to work out a solution for my request with her assistant while communicating with me and other pilots in her sector.

I was past FL70 and on my way up the last 1000ft to FL80 when I noticed that at FL80 I will probably be right inside the bottom of a cloud layer at exactly 0C or slightly below freezing. As I was still headed towards Magdeburg where the heavy precipitation was, I called her back to request going back to FL70, which was granted immediately. She also instructed me to proceed direct TAMEB. TAMEB is a waypoint south of Erfurt and part of my filed route.

I was then handed off to Munich RADAR, thanked her for the help (she was keeping me out of the worst) and upon checking in with Munich RADAR got:

TAMEB and DEMAB from my position at the time are basically in the same direction with only a few degrees of difference. So either one is fine for a track to avoid the weather.

However, that was quickly changed one more time:

And that was the track for a while, as can be seen on the following map with the actual track in green: 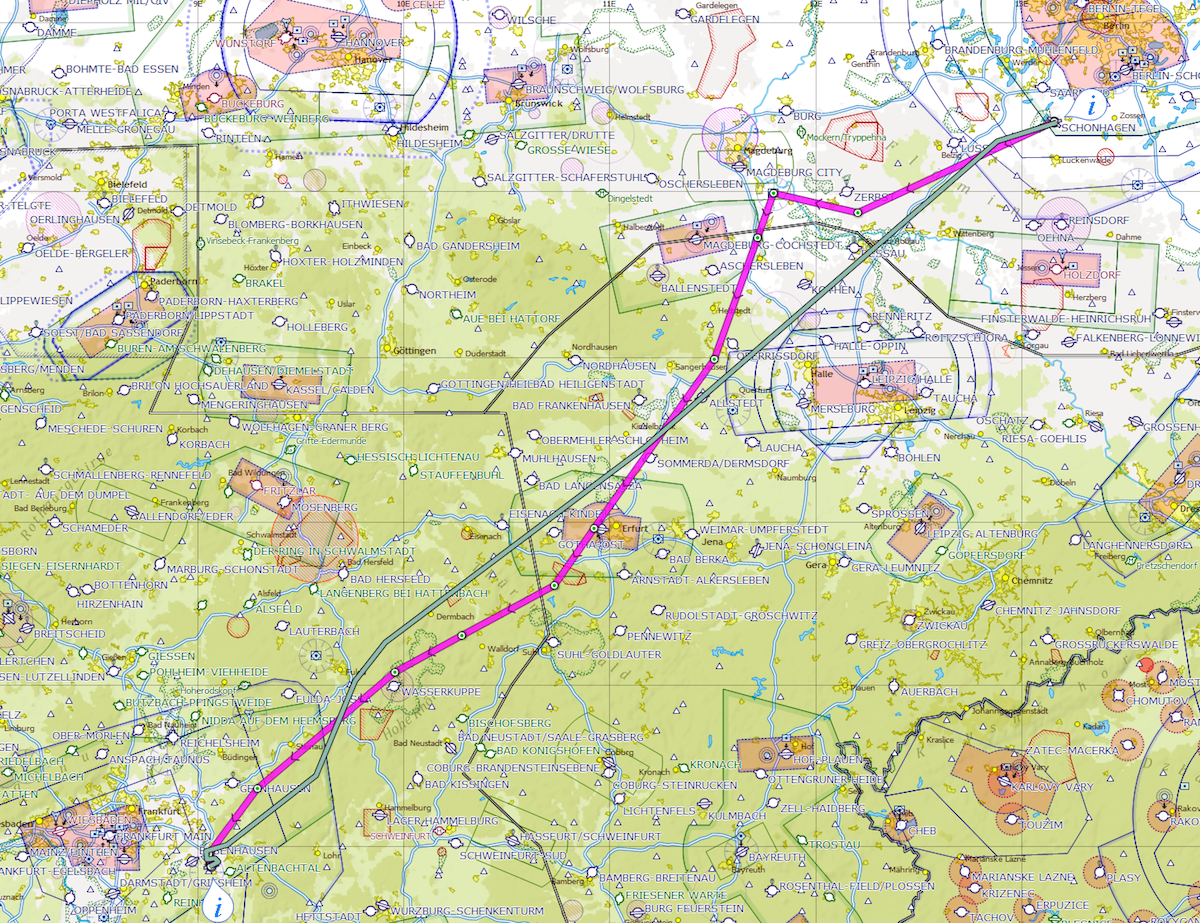 Rain from a warm front

Shortly after all those conversations I entered a sector with rain. It was loud and I was expecting some turbulence. I moved my hands to sideyoke and power level in order to be ready to reduce my airspeed. Surprisingly, there was no turbulence. It was just a lot of water.

A few minutes later I was through and looking to my right and slightly back I could see the outer parts of the cloud formation that was producing the rain. 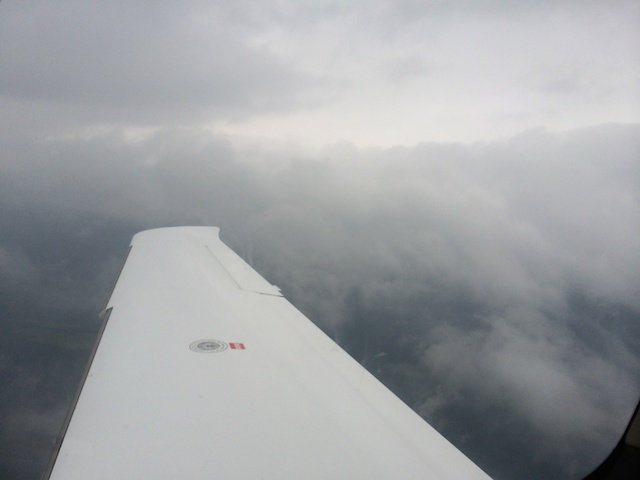 On the moving map (the big screen in the next picture) my position was now indicated as somewhere Northwest of Leipzig. The small screen to the left shows weather radar as seen from the ground. It gets processed and then sent to the airspace via the Iridium satellite network. Those images are about 20 to 30 minutes old but still useful to plot a course around the worst - simply by maintaining a good distance. 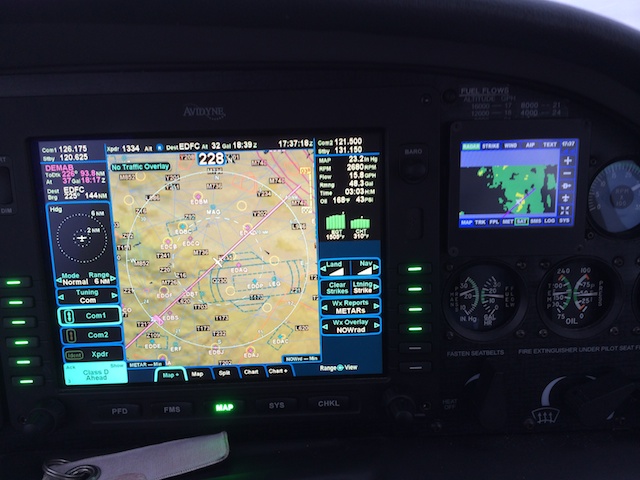 Given my position on the weather radar display I just went through the yellow area. Yellow means heavier precipitation. It was more rain that I experienced before as a VFR pilot. However, I can’t tell, for lack of experience, whether that was actually what to expect from a yellow area. And then, as I just said, the images are not up to the minute anyway. For time being I tend to think that I probably scratched the edge of it, as the yellow area had been moving to the Northeast.

Minutes later I got this nice view: 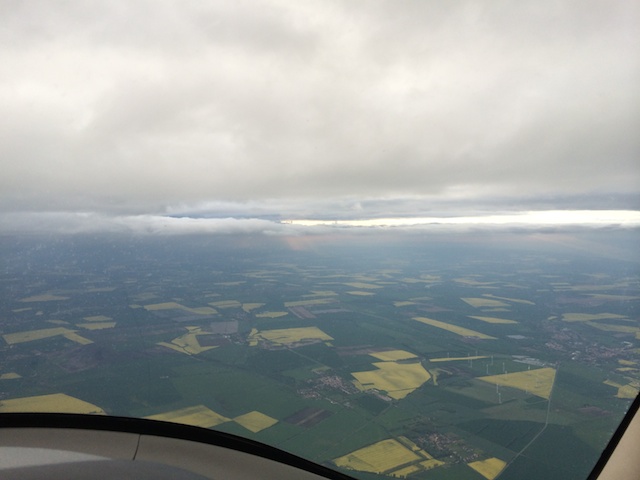 At some point Munich RADAR gave me vectors:

NTG turn 5 degrees to the right for separation from military traffc. 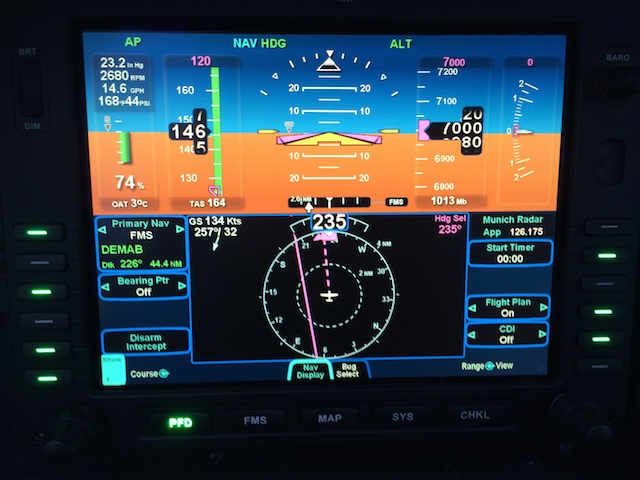 NTG advice when ready to climb.

To which I responded:

Which was countered with:

As the PFD showed an outside air temperature (OAT) of 3 degrees Celcius and I was nicely between layers in VMC, I did not want to go anywhere else. I felt I was already too close to the point for my descent into Aschaffenburg that, if I had complied, I were going up and down for no good reason. Plus I would have had to climb above the cloud layer above me to avoid flying in it to avoid flying in icing conditions. It doesn’t look far but then I learned later that another pilot was above it a bit further to the North and he came out of those clouds at FL150. So I would have had to climb another 8,000ft. Just to burn additional fuel, play with some icing, and then immediately start my descend a few minutes later. So I declined the request and it was fine. 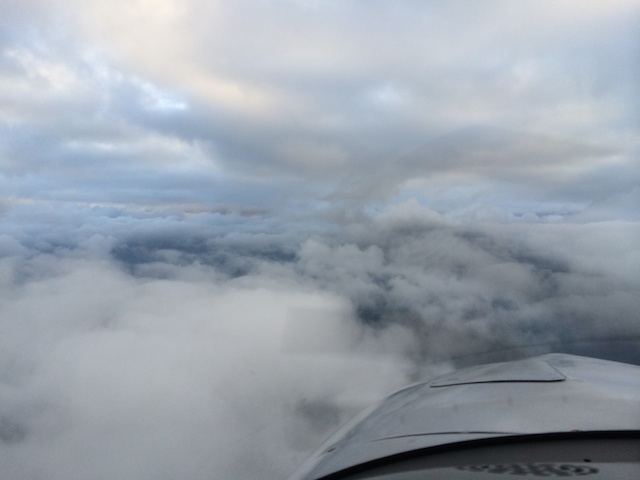 To my right the sun broke through the clouds and I was hearing how ATC sent a lot of airlines going into Frankfurt Airport (EDDF) to KERAX at a much higher altitude than I was at. 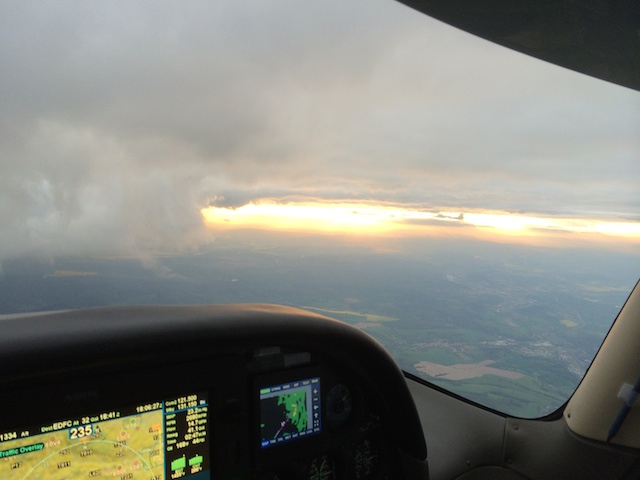 After passing a few isolated left-over clouds the sky eventually cleared up and I had an even better view. First time also that I was able to spot an airliner. He was climbing and passing from left to right in front of me. 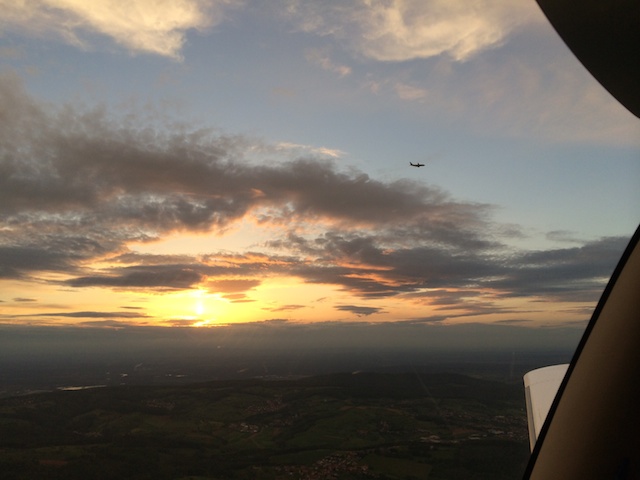 Eventually I was sent down to 5,000ft on the local QNH:

Canceling IFR at this time NTG.

To which ATC responded:

I then switched to the FISO frequency for Aschaffenburg to let them know about me being some 15 NM away for landing and direct the aircraft via the HDG mode on the autopilot towards a point a bit to the North of the traffic pattern while descending further. I then joined the right downwind for runway 26 and came in for the landing.