The forecast for Saturday and Sunday for the Eastern Alps and further on to Frankfurt looked not great. So we decided to head back home on Friday. The route was planned towards SASAL to cross over into Austria and then overfly the mountains via Mariazell, stay south of Linz and enter Germany shortly after for a landing at Mühldorf. There we wanted to have lunch and continue in the afternoon to Frankfurt.

I did file the VFR flight plan and after refueling we took off from Szeged (LHUD). Upon calling Budapest ATC they assigned us a transponder code and asked “what is your requested altitude” to which I responded “8500”. At the time of the flight there were two restricted areas on our route towards Lake Balaton. As I write this they have disappeared from the SkyDemon map. My inquiry to Budapest ATC about their status had been responded to with “not active”. It appears they have now been withdrawn completely.

We were climbing towards an area with some clouds and shortly after I took the picture were above them. 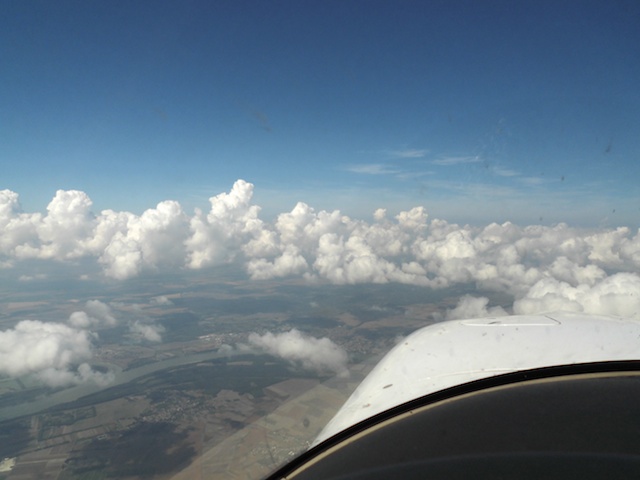 While getting closer to Lake Balaton they clouds stayed left of us. 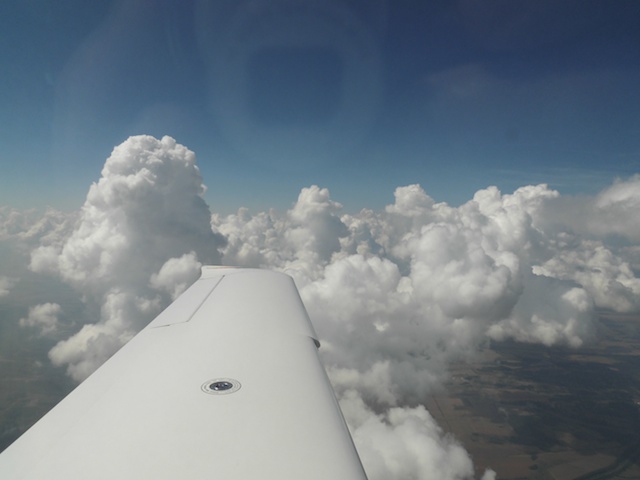 And then the lake came into view. 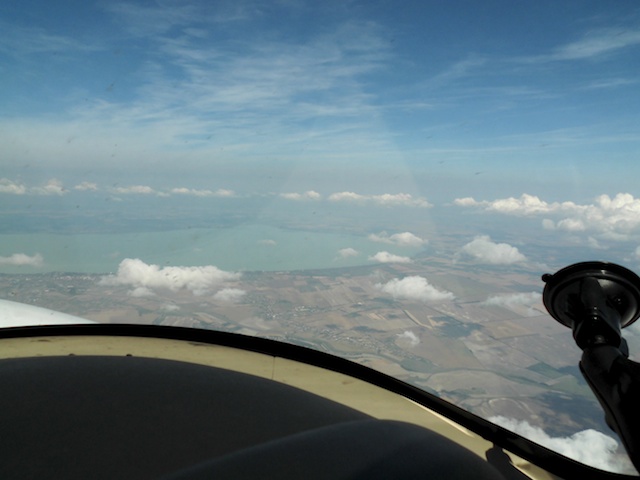 A bit closer to the exit point SASAL Budapest ATC asked us “G-NI descend to 8000ft due to traffic”. We never saw the other aircraft in the clear sky. It must have passed above and behind us. I wanted to get back to my original altitude: “please confirm traffic is no factor” which was replied to with “traffic no factor. You can climb back to 8500”.

We overflew SASAL and contacted Wien. Radio communication in Austria is performed in English with just the small talk and “complicated questions” being in German. I mention this because in Germany on a FIS frequency it is mostly German. It does have a certain twist to hear German speaking Austrians communicate amongst themselves in English with the location names all being in German. Actually it is a good thing. That way foreign pilots passing through are not left out when it comes to situational awareness regarding the activity around them. With our British registered (G-…) aircraft probably nobody assumed I were speaking German neither :-)

But a slight problem showed up. There we were just past SASAL and ready to head to our next waypoint: the airport of Mariazell. We would not have been able to get over the clouds at FL85. Now what? 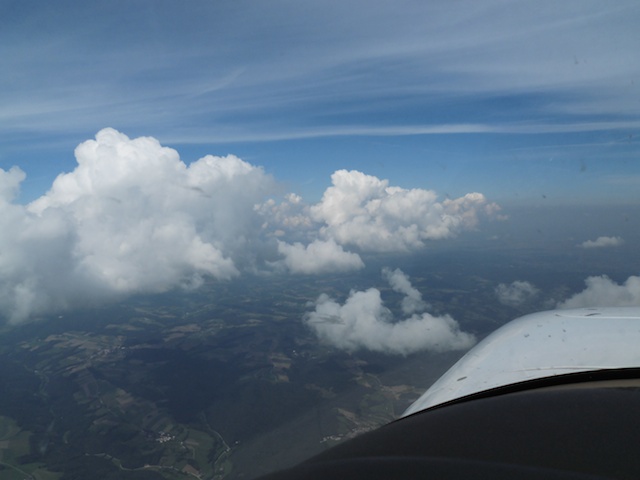 So I turned north and asked the controller “can you coordinate with Wien to penetrate class C airspace for about 20 miles?” His reply was the frequency for the entity that owns the class C. A very friendly lady voice granted me permission to enter. 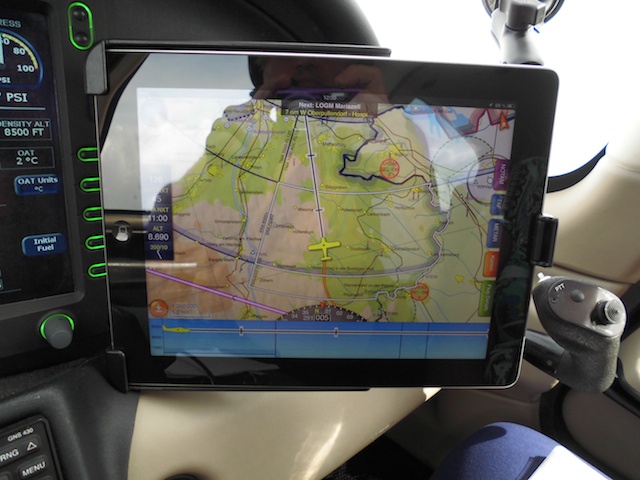 After traveling about 20 NM she said “G-NI climb and maintain 9000ft. Wien QNH 1012” followed by her question “when can you turn west?” I told her my next waypoint would be GISPO and I would advice shortly when able to turn.

Shortly after that conversation we saw a Lufthansa Airbus descend from left to right in front of us. It was a great sight and it was clear to me that we were apparently crossing one of the STARs (Standard Terminal Arrival Route) into the Vienna International Airport.

Not long after that the clouds to our left stayed back over the mountains and I was able to make the turn to GISPO. 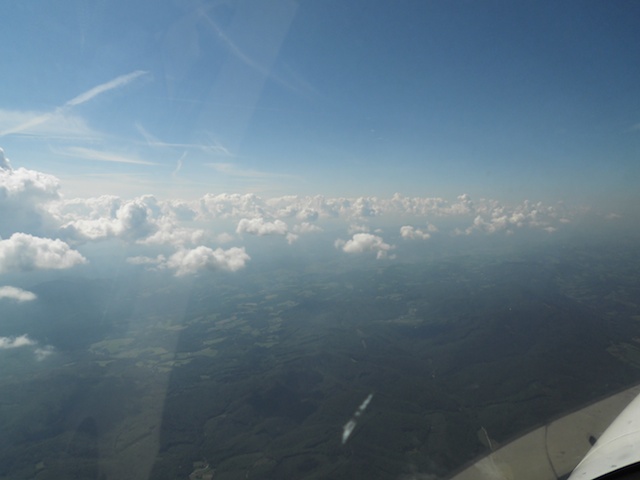 We were leaving Vienna’s class C airspace. Without a frequence change the controller changed and was now a male voice. 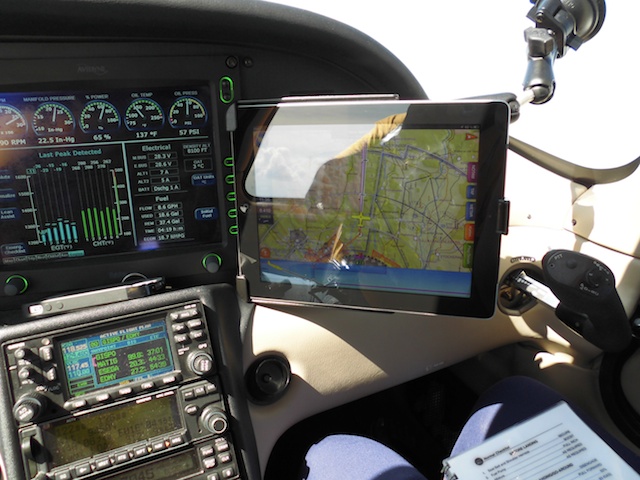 Now we had a different cloud problem. This time we had a few clouds a bit below us and in the distance it appeared as there were more on our present altitude. 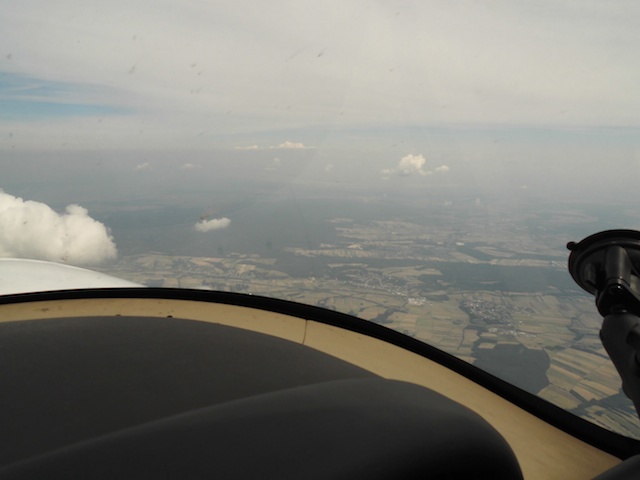 So I requested a descend to 6500ft. The reply was “descend after passing GISPO to 6500 granted”.

We were then traveling along the mountains in the south of Linz to the next waypoint MATIG. 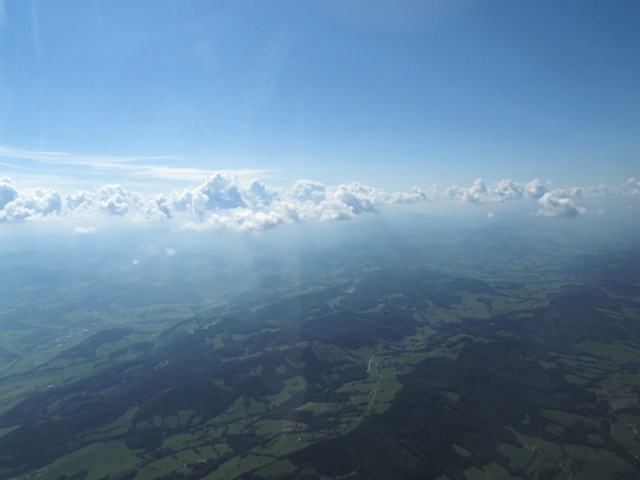 I don’t remember any frequency change since contacting Wien ATC to request permission to cross their class C airspace. We stayed on the same frequency even after we were well clear of it. Maybe they started to trust that VFR pilot talking to them about RNAV waypoints :-)

When we were getting closer to Salzburg class C airspace I received “G-NI say further routing through Salzburg”. I responded “MATIG followed by ESEGA to cross over into Germany”. We were basically at MATIG so he replied “report ESEGA next”.

The autopilot turned towards ESEGA … 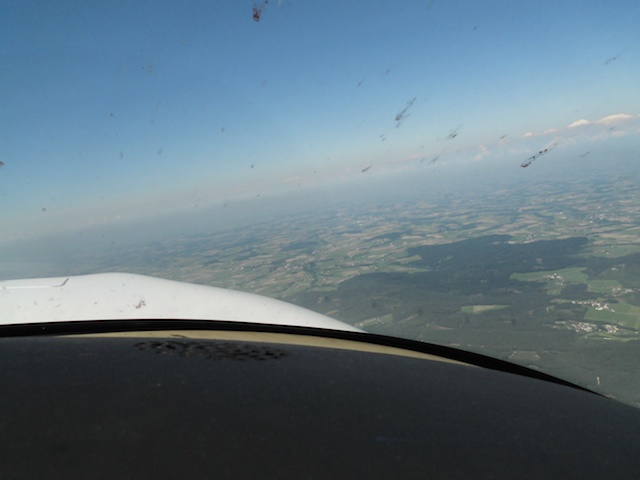 … and within reach of it the Austrian controller told me the frequency of München Information. I switched and made my initial call.

All the prior days over the Czech Republic, Slovakia, Hungary, Romania and Austria we flew with an assigned transponder code and in contact with “real” ATC regardless of the type of airspace we were in. Now what a drastic change occured:

I was on a FIS frequency which is just an informational service. When the workload permits they give you traffic information. You can ask them about weather and other things. But in no way do they offer US style flight following nor are they controlling anything. You are flying VFR and everything is on you. By requesting “traffic information” you get a second set of eyes - again, if the workload permits and he looks on the RADAR screen when not eg. on the phone. It is actually common to not get an answer from FIS. Later you can hear “I was on the phone. Which station called?”

This experience has not changed in the 17 years I didn’t fly. When I made my very first trip to a destination outside Germany and then returned from Brussels after crossing over into Germany and calling FIS the very same happened.

But then it is not wrong to be reminded that looking out is the best way to avoid other traffic. And VFR has the word “visual” in it.

Due to the detour via Wien we landed after 2 hours and 52 minutes in Mühldorf where we had a wonderful lunch with desert and coffee. 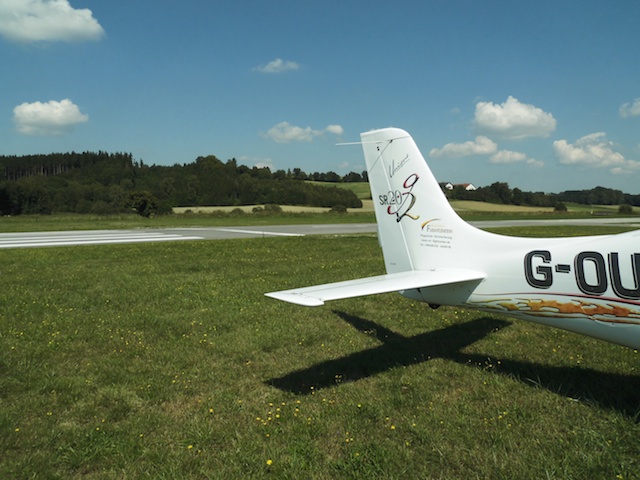 And the vertical profile:

Later we had an uneventful and slightly boring flight back to Egelsbach from where we started this journey.