On Monday the weather over Romania looked pretty bad: 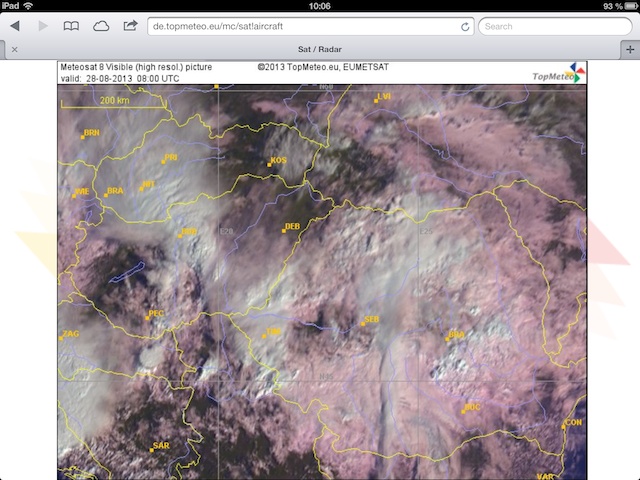 And the morning view from our hotel in Szeged showed fog and rain. That definitely was a no-fly situation. 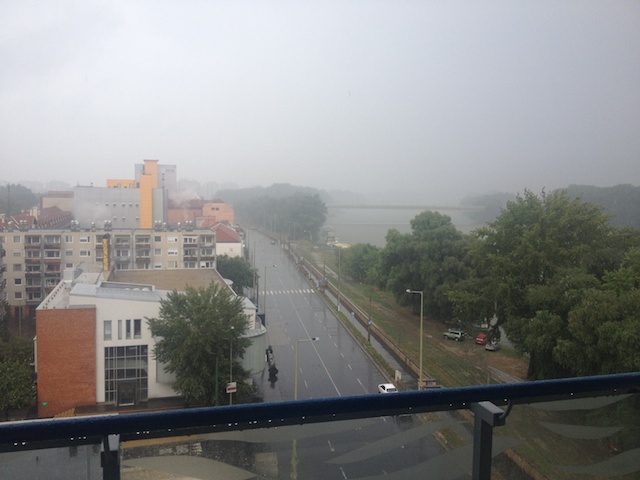 Our initial idea from Sunday evening was to use Monday to visit the Szeged zoo for some family time. But with rain any outdoor activity would not have been fun. So instead we had to stay inside the hotel and find other things to do.

The forecast for Tuesday looked promising. According to it there would have been cumulus clouds similar to those that we encountered on our way to Ostrava in the Czech Republic and over Slovakia on our way to Szeged.

However, we didn’t count with the huge delay issues with the authorities would cause. I’ve already written about that episode and will stick to the aviation related part of the story here.

As I already mentioned in the other article we had to turn back and never made it to our destination Bucharest. Here is route actually flown:

And the corresponding vertical profile:

Shortly after crossing over into Romania Budapest ATC handed me off to Arad Approach which controls a good part of the area around Arad and Timisora.

To my surprise Arad Approach asked for a radio check every ten minutes. There was nobody else on the frequency. After ten minutes I called in “G-NI radio check” and the controller responded “I read you five”. 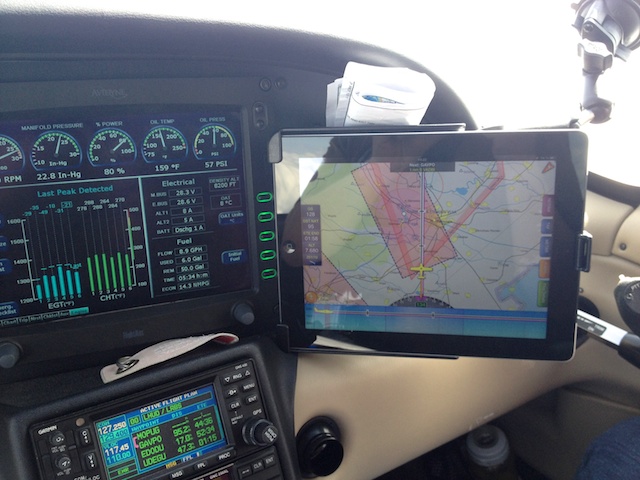 The clouds looked ok with enough holes to see the ground and potentially descend. 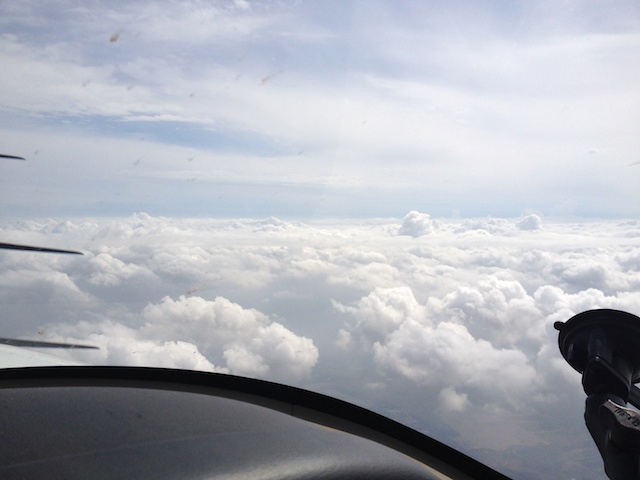 At that point we were 44 minutes or 96 nautical miles away from our first waypoint GAVPO which is located a bit south of the Karpatian mountains to the North of Bucharest. I had selected GAVPO because the fligh path would keep us south of the mountains and over mostly low terrain with only some higher hills of not more than 4800ft. After GAVPO there were additional restricted areas shown on the map and so I had figured out a routing around them before going below Bucharest’s class A airspace (no VFR flights allowed) for landing at the destination LRBS (Bucharest Baneasa). 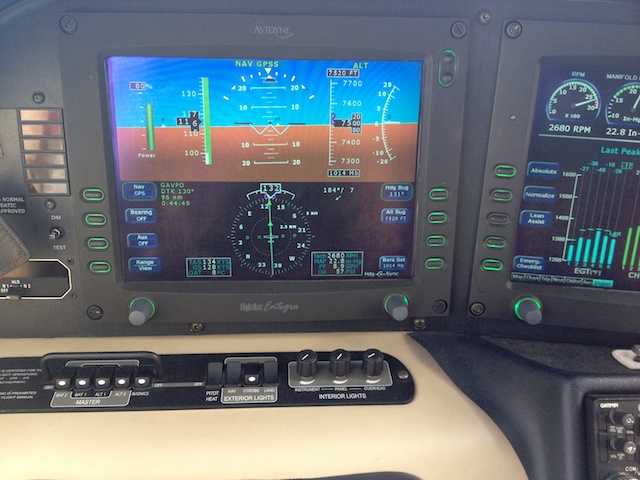 The forecast predicted scattered clouds along the way and more open sky towards Bucharest. 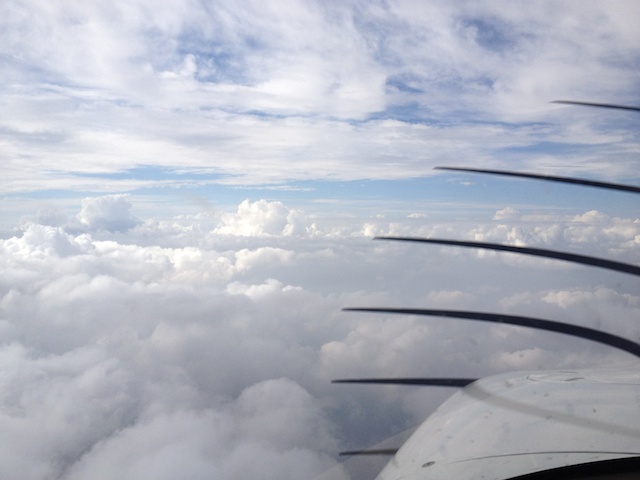 But after a few more miles the clouds below us became a solid layer for a few minutes. 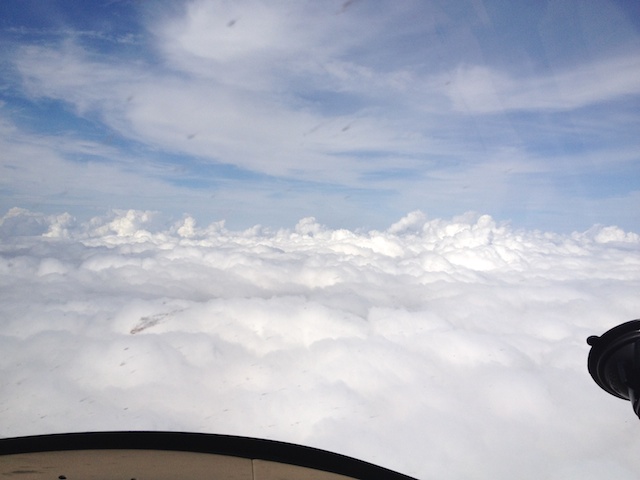 At this point Arad had handed me off to Bucharest ATC already and I asked the controller for a METAR for Bucharest. He reported BKN036. That means a broken cloud layer at 3600ft above ground level.

Broken means 5-7 oktas or in other words between 5/8 and 7/8 of the sky is covered with clouds. For a VFR pilot descending through a broken cloud layer essentially means that he will likely fly through clouds on the way down and that is dangerous.

Scattered on the other hands means 3-4 oktas so basically half of the sky or less is covered with clouds. That refers to the harmless cumulus clouds one sees on a sunny summer day.

But while that conversation happened we had traveled much further and in the distance ahead I spotted two well developed cumulus nimbus clouds - a thunderstorm.

We were over an area with very few clouds but we had ahead an area with higher terrain before it gets flat all the way to Bucharest. The thunderstorm was still far away and so I decided to go under the cloud layer to have a peek. One thought was to go further south to stay clear of the hills and maybe be able to go around the thunderstorm. The wind was blowing from the south and the thunderstorm was almost north of the straight line from our present position to Bucharest.

However, after a very quick descent to 3000ft it became clear that those clouds were reaching down to the tops of the hills. It also looked like rain was about to start - all in all way to dark to consider anything other than to climb up again and head back to where we came from and where the weather was better.

Before the descent I had informed Bucharest ATC that I would like to look around for options and after reaching the original altitude again I told them that we were going back to our origin in Hungary. Minutes later I was in contact with Arad Approach: “welcome back”.

I was aiming to cross the border between Romania and Hungary at the same waypoint MOPUG as before. However, what have been nice cumulus clouds below us 30-40 minutes before had become little towers. The flight log shows that we weren’t traveling back in a straight line. That is because I navigated a bit around those towers to keep a safe distance.

On the way back towards the border the weather improved and the space between the clouds got wider and wider. Shortly after crossing the border I started to descend into Szeged where the wind had changed and now the other runway direction was in use. When we landed we had the same wide open sky with a few cumulus here and there as when we departed.

Flying Into The Schengen Zone

An interesting bit of this episode is that when I was handed off to Budapest from Arad Approach the Hungarian controller advised me to land in Arad. He was telling me that I was about to enter the Schengen zone and it sounded like a bit as he was implying unauthorized. I responded “Negative. We just departed from Szeged and will enter a bit south of MOPUG”. That was answered by a simple “report MOPUG next”.

We had a flight plan from LHUD (Szeged) to LRBS (Bucharest Baneasa) and that was in the system. We were probably in touch with Budapest ATC before the message from the Romanians about us turning back arrived.